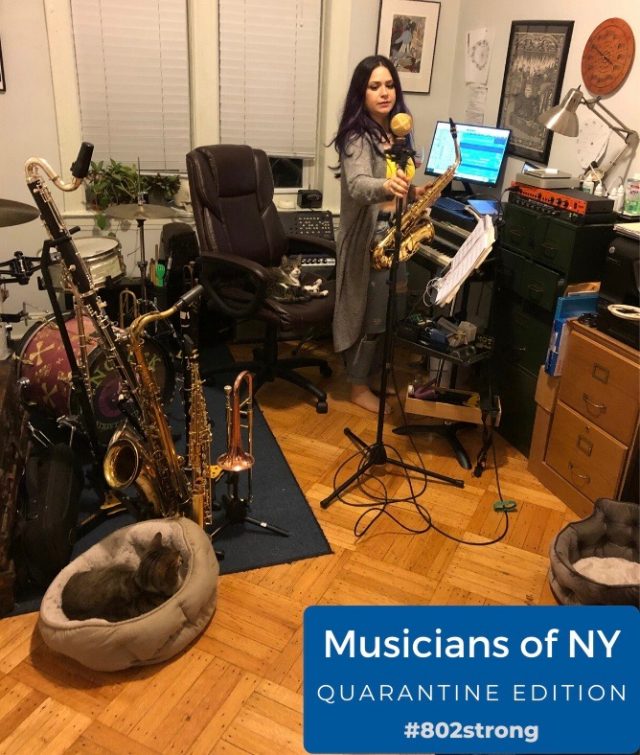 In a typical month, 802 woodwinds player Emily Pecoraro has a pretty diverse gig life: subbing on Broadway shows, playing jazz gigs with big bands and other Free-improvised projects, and regularly playing lead alto in the New York horn section of The Temptations and The Four Tops when they’re in the New England and tri-state area. In addition to performing on saxes, clarinets, and flutes, Emily serves as the Artistic Director and Founder of a Brooklyn-based chamber music concert series called The Variousound Sessions and as Program Director of the Women in Jazz Organization’s collegiate mentorship program, WIJO Mentors. While all the live aspects of Emily’s work have been cancelled, she has been able to continue teaching her twelve students virtually. Emily has also worked as a florist since grad school and has made a few flower-arranging and design videos from home. Emily has also been keeping busy helping to coordinate large, virtual performances of The Quarantined Woodwind Ensemble. Watch their most recent performance of “Africa” here: https://youtu.be/cxiGIucq7LY

“In the first few days of quarantine I had a jolt of inspiration to realize an otherwise logistically-complicated idea that I’ve had for months: a massive video of friends and colleagues playing music together. And thus, The Quarantined Woodwind Ensemble was born! The first video was an arrangement of Prince’s tune ‘I Wanna Be Your Lover’ for a whopping 32 woodwind players and a few percussionists too. I sat down and wrote that arrangement in three days. I’ve written now a few arrangements for about this same size/instrumentation, along with my friend and ensemble co-director Tyler Burchfield who has done the same. At the moment, there are six arrangements/videos in the works for this group, involving largely unique personnel for each. So, all in all, it’ll be about a hundred people involved! It’s been loads of fun to not only flex my arranging muscles with this, but to also have the opportunity to bring together so many incredible friends and colleagues from many Broadway pits and the New York jazz scene (even if it’s only virtually!)” #MusiciansofNYQuarantineEdition #MusiciansofNY #802strong

In Categories: Musicians of NY