Pride Month in NYC is my favorite month of the year. Rainbow flags and bunting strewn over storefronts, apartment windows, and cabs. Tourists and residents buzzing around the densest city in the world beaming with pride and love for our fellow citizens (whether gay or straight). There’s a euphoric sense of acceptance that exists here as we celebrate our people, and look back on the struggles of our brothers and sisters that fought for equal rights. 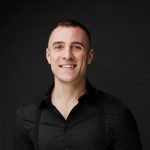 Because of Covid-19, this year’s Pride parades have sadly been canceled so we can protect ourselves from spreading the virus in large groups. While it’s still unclear what quarantine restrictions will be lifted by June, it’s clear that Pride in NYC will have to be celebrated in a different way. When Mayor DeBlasio announced canceling the festivities, he said, “New York City is the birthplace of the modern LGBTQ rights movement. We’ve come a long way since the first Christopher Street Liberation Day March 50 years ago, which is a testament to the bravery and resiliency of LGBTIA+ New Yorkers in the struggle for equality. While this pandemic prevents us from coming together to march, it will in no way stop us from celebrating the indelible contributions that the LGBTIA+ community has made to New York City or from recommitting ourselves to the fight for equal rights.”

In the new mostly virtual world we live in, celebrating Pride together while being socially distant will be challenging. There are plans for a virtual 24-hour Global Pride event on June 27 that “will show the LGBTQIA+ movement for the very best it can be, showing solidarity at a time when so many of us are mourning and strength when so many of us are feeling isolated and lonely,” Kristine Garina, president of the European Pride Organizers Association, said in a press release. “Above all, we will show our resilience and determination that Pride will be back bigger and stronger than ever before.”

I’m not entirely sure what a “virtual Pride” will look like, but I’ve found solace during this horrific pandemic on social media where we have been able to come together and connect virtually about the loss and fear we all have been experiencing. Before Covid-19, I found an important Instagram account which is a living memory of the lives lost from HIV/AIDS. @theaidsmemorial lets survivors post photos and stories about their loved ones, and it’s an opportunity for people around the world to experience their pride and grieve with them. I try and read and “like” the daily posts as often as possible so I can educate myself about the experience of my brothers and sisters who fought and died for a better life, not just for themselves, but for future generations of LGBTQIA+ people. We will be eternally grateful to them for it.

The @theaidsmemorial account also raises funding and awareness for SAGE USA, an advocacy and services organization for LGBT Elders, as well as the Audre Lorde Project, whose programs and initiatives are led by lesbians and queer women, trans and gender non-conforming people, intersex people, and people of color.

Life in upstate New York as a gay young teenager was tough. There were no role models or out gay people to look up to, help me sort out what exactly was different about me. There were no gay proms or homecoming kings to emulate, let alone a visible gay relationship to aspire to.

Theatre and music were always my escape from reality. Characters like Molina in “Kiss of the Spider Woman,” with a book by Terrence McNally, music by John Kander and lyrics by Fred Ebb, taught me that it really was O.K, to be different. Molina’s mother accepted him for who he was, and mine would too when I was ready to tell her the truth. The power of fantasy and the ability to escape a difficult reality in the closet were godsends for me as a teenager, and I thank Terrence for that. We lost him in March to Covid-19 — he was a giant in our industry, and I’m grateful to have worked with him on the Broadway production of “The Visit.” I’m forever indebted to him for his ability to give us all hope.

In his 2019 Tony Lifetime Achievement Award acceptance speech, Terrence said, “I love it when I remember theatre changes hearts. That secret place where we all truly live.”

At the height of the AIDS epidemic, our LGBTQIA+ writers, designers, actors, stage managers, stage hands, music directors, and musicians rose above HIV/AIDS, sometimes dying of the disease itself while creating art. Their sacrifice and perseverance are the reason Broadway has been able to become the billion dollar industry it is today. It’s a gift from a generation that overcame hardship and struggle while a virus ate away at its family.

Some of the iconic musicals created during the AIDS crisis on Broadway were the original versions of “Les Miserables,” “Cats,” “Evita,” “Into The Woods,” “Sweeney Todd,” “Sunday In The Park With George,” “A Chorus Line,” “La Cage Aux Folles,” “Dreamgirls,” “Kiss Of The Spider Woman,” “Zorba” and “42nd Street.” They are a living example of the potential for an artistic rebirth both during and after an epidemic.

With Broadway indefinitely dark, there’s little chance of actors and musicians performing together in the same room for the foreseeable future. One of the only things that gives me hope is that we’ve been through something like this before and we can weather the storm again.

In honor of Pride 2020 in New York City, I want to propose the creation of a Local 802 LGBTQIA+ committee that is focused on highlighting better representation and visibility of our issues both to Local 802 members and the Broadway community at large. We deserve to create a space where members feel open to communicate about their concerns without retribution and can properly promote fair hiring. LGBTQIA+ musicians should never be discriminated against.

If this is something you’d be interested in participating in, please send an e-mail to local802pride2020@gmail.com to get more information about virtual meetings while we are all socially distancing. For the month of June (and on Pride Day itself on June 27), I’m also proposing the use of #802pride2020 on all social media platforms as a way to virtually celebrate pride together with LGBTQIA+ members and our allies! It will be a great opportunity to share photos and videos of how we are all celebrating Pride in our own way!