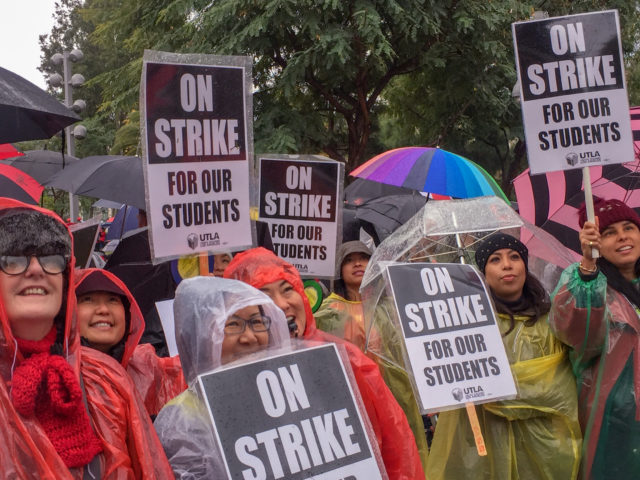 TEACHERS UNITED! All across the country, teachers have been mobilizing for better conditions for their students and fairer compensation for themselves. Above, teachers in Los Angeles walk the picket line in 2019 (photo by Wilson Pumpernickel)

Unions are built on the principle of solidarity – an injury to one is an injury to all. It means that we stand up for each other when injustices are being done against us, our colleagues, or sometimes in our own name. By those measures, 2019 was a banner year for unions and labor solidarity. It’s too soon to say that the labor movement is once again thriving as in 1954 (when 35 percent of the American workforce was in unions), but it’s very much alive and kicking. Joe DeManuelle-Hall and Dan DiMaggio from Labor Notes wrote up an excellent year in review. Let’s review some of their highlights from 2019:

2019 continued the trend from the year before of mass teacher mobilizations against austerity and cuts that weakened public education. Among others, Los Angeles, Denver, Oakland, West Virginia and Chicago teachers struck, winning important gains. Teachers fought not only for themselves, but for strong, quality public education for all students. In Chicago, for example, teachers negotiated a librarian and nurse in every school. In Little Rock, teachers held a one-day strike to protest the re-segregation of their schools, the site of the 1957 fight for integration of Central High School. Several of these unions also elected progressive reform slates focused on organizing.

Massive strikes in the private sector

Hundreds of thousands of workers walked the picket lines in 2019, on pace to match the increased union activity levels from 2018. Over 30,000 Stop & Shop workers in New England went on strike for 11 days, defeating proposals that would’ve harmed their health insurance and pensions. In the Southeast, AT&T workers held the biggest strike in a decade in the region, winning wage and 401(k) increases, while holding down healthcare costs. In manufacturing, 49,000 General Motors employees went on strike for six weeks, reaching a settlement that hastened lower-tier workers’ advancement and other important improvements.

While the tech sector is largely nonunion, workers there have made headlines with savvy organizing and high-profile actions. One thousand Amazon workers walked out in Seattle to protest the company’s lackluster response to addressing climate change. Some of the Amazon workers had also shown support to warehouse workers in Minnesota who walked out during July’s “Prime Day.” Tech workers also fought back against the detention camps on the border by protesting their employers’ contracts with Immigration and Customs Enforcement, including workers at online furniture retailer Wayfair’s Boston headquarters, who walked off over the company’s sale of beds to ICE. In California, rideshare drivers and other app workers led the passage of AB5, a bill that entitles app workers to the protections of employee status, as opposed to independent contractors.

Across the globe, unions also played important roles in important movements and victories. In Chile, spurred by increases to public transport prices, over a million people joined protests over the country’s vast gap between the rich and the poor – the top one percent in Chile control over a quarter of the country’s wealth. Joined by dockworkers, miners, government workers and others, the protestors won a new referendum on the constitution. In Puerto Rico, unions helped overthrow the governor in the largest strike the island ever saw. French workers are also still striking over changes to their pension system, while Finnish postal workers engaged in protests that led to the prime minister’s resignation and the selection of the youngest-ever prime minister in the country’s history, who is also a strong progressive.

Solidarity is what animates participation in the labor movement, creates unity, and gives us the strength to muscle through the frequently arduous fight for better standards. I have only been at Local 802 for a few months now but I have witnessed some of the wonderful camaraderie that musicians have on the job. Our mission as a union (including our members, elected officers, staff, and those musicians who we aspire to bring in) is to elevate that camaraderie into solidarity, both for other musicians and for fellow workers struggling to live with dignity in New York. In 2020, I believe we can take that solidarity to a whole new level.