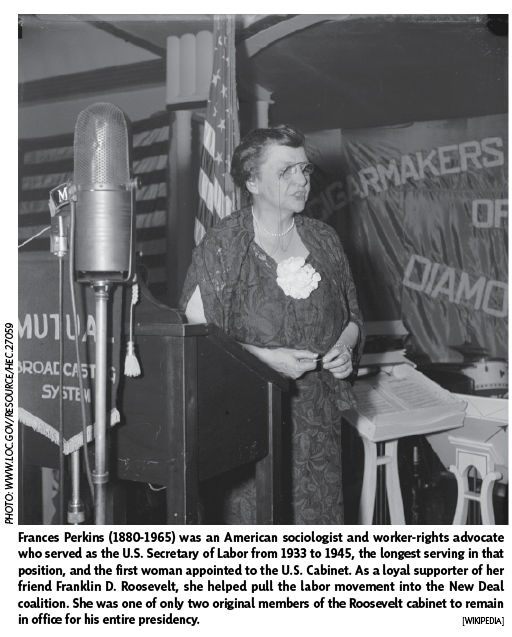 “‘Social justice’ is more than a shibboleth with her; it has been the maxim of her life, and if it carry her far, no one can say that the need is not great.”

On March 25, 1911, Frances Perkins, then executive secretary of the New York City Consumers League, was enjoying tea with friends in Washington Square Park. At just 31 years old, her career accomplishments were already innumerable. She had established herself as a bonafide policy expert and leader for liberal social reform at a historic moment in labor organizing, and had already begun shaping municipal policies for the benefit of women and exploited workers. She had studied at Mt. Holyoke, Columbia College and the Wharton School at the University of Pennsylvania, and had won a fellowship with the New York School of Philanthropy. A brief job as a teacher in Chicago years earlier led her to work with the poor and unemployed in settlement houses. There, she was introduced to accomplished social reform leaders of the day, including Jane Addams, Ellen Gates Starr and Grace Abbott. She learned about trade unionism and further solidified her commitment to social and labor justice.

She made her way back east through Philadelphia, where she accepted a position as general secretary of the Philadelphia Research and Protective Association, which worked against sex trafficking of immigrant girls and African-American women coming from the South. Finally, settling in New York City, she studied malnutrition of school-aged children in Hell’s Kitchen.

Landing her job with the Consumers League fulfilled a years-long dream after working with a former mentor and activist, Florence Kelley. Perkins was often lobbying for social and labor reforms in Albany — limiting work for women and children in factories to 54 hours per week, regulating sanitary conditions in bakeries, enacting fire protection for factories, and taking part in other causes. This particular afternoon in March, however, would push her work beyond the scope of local law and inspire her to think on a vastly larger scale.

Washington Square Park, not unlike today, was a bustling community hub that fateful Saturday. Children ran around the central fountain as old men were engrossed in chess games. Visitors strolled under the iconic arch. Without warning, the blare of fire engines cut through the balmy afternoon air. Horrified onlookers, including Perkins, turned their gaze to the northeast corner of the park, where out of a factory building, plumes of smoke billowed — and women jumped out of high floor windows to their deaths. Witnessing this horror transformed Perkins, and it became, in her words, “the day the New Deal was born.”

Out of the ashes of the Triangle Shirtwaist Factory fire, a strengthening labor movement emerged, particularly among women and immigrant workers. Perkins, in particular, heeded this calling in a way that was personal. Years of policy development and organizing on behalf of textile workers for safe working conditions had led to this moment. A Committee on Safety was immediately formed, with Perkins appointed as executive secretary, to research the tragedy and recommend preventative measures. She expanded the scope of policy reform to include sweeping changes in the way factories were operated and how the conditions within them affected workers and their families. She was an effective lobbyist, and her vision was adopted into New York state law, which became a model for other states and eventually the federal government. Thousands of female immigrant workers organized, with the politically skillful Perkins leading the charge in government. The decades-long dominance of unregulated industrialism was coming to a close. All of this before women had the right to vote.

Frances Perkins’ crowning achievement, of course, was her work with President Roosevelt on the New Deal, a series of visionary and transformative laws that impact virtually every individual in the U.S. to this day. Their working relationship began when FDR served as governor of New York, where he appointed her to oversee the entire labor department as the state’s industrial commissioner. She challenged then-president Hoover’s assertion that, as the Great Depression deepened, employment was on the rise and economic recovery was in sight. This critique catapulted her to the national spotlight, her assessment supported by years of New York state labor statistics showing a deep decline in employment. 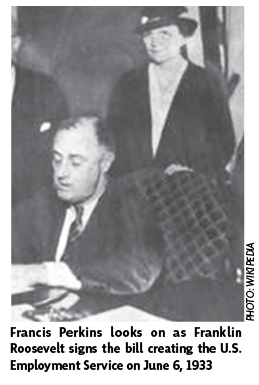 FDR’s ascension to the presidency was thanks, in part, to Perkins’ accomplishments in labor policy at the state level. She was appointed as his secretary of labor, the first woman to hold a cabinet position in the federal government. The policy goals she outlined for him turned out to be his legacy as president and the continued aspirations of politicians even today. She sought a 40-hour work week, demonstrating her ability to evolve in her thinking — having sought only years prior a 54-hour work week. She wanted to put an end to child labor, establish a minimum wage, create unemployment compensation and workers’ compensation, route federal aid to states for unemployment relief, create a national pension for retirees, begin an effective federal employment service, and — last but not least — establish universal health insurance! These policies were referred to collectively as the New Deal.

The first 100 days of FDR’s presidency in 1933 gave way to sweeping infrastructural development, thanks to Perkins’ vision and guidance. Through a series of federal public works programs, Perkins led the government allocation of billions of federal dollars to employ close to two million people to build schools, roads, post offices and highways. Only a year later, in 1934, Perkins led the Committee on Economic Security, which led to the legislation known as the Social Security Act. A year later, it was signed into law. It included not only a guaranteed income for retirees, but unemployment compensation, workers’ compensation and disability aid. She was also able to eliminate child labor from the vast majority of industries, freeing up children of working class families to invest in their education and grow beyond earning income for the family.

Her political wishlist was incomplete by the time she left her cabinet position, although it demonstrates she was nothing short of a visionary. Her dream of universal healthcare remains elusive, despite several politicians and administrations over the years attempting to legislate it into law. As World War II began and took precedence over domestic priorities, Perkins maintained her commitment to the rights of individuals, managing to thwart a program developed by FBI Director J. Edgar Hoover to fingerprint and keep a dossier on all U.S. citizens. She was particularly horrified by the internment of Japanese-Americans, two-thirds of whom were citizens, in the name of national security. Her life’s work in labor rights and developing programs like the New Deal centered around the belief that government, at the federal and state level, should serve for the benefit of the individual.

She attracted political enemies, including conspiratorial congressmen who managed to subsume her in political mire. They created a scandal for her centered around Harry Bridges, who led a 1934 Longshoreman’s strike on the West Coast. It was alleged that he identified as a Communist, in addition to being Australian, prompting an investigation by the Labor Department and the FBI to deport Bridges as an undesirable alien. The Labor Department under Perkins found no justifiable cause to follow through on deportation. This sparked outrage from members of Congress, who formed a special House Committee on Un-American Activities. The chairman, Martin Dies, called for Perkins’ resignation, and a cascade of hate mail poured into the Labor Department. Through the six-month ordeal, Perkins managed to attend to business as usual, and maintained her position of allowing Bridges to remain in the country. The House Judiciary Committee ultimately ruled on the side of Perkins, although among certain factions of voters and the government, her image was forever tarnished.

Perkins served through both of FDR’s terms until he died in April 1945. After she submitted her letter of resignation, President Truman asked her to serve as a representative to the International Labor Organization meeting in Paris. It was a long time coming for her. Over a decade earlier, she had convinced FDR and Congress to apply for membership to the ILO to solidify America’s global commitment to workers’ rights. It was one of the many actions that Perkins took over her career to prioritize labor and support unions. 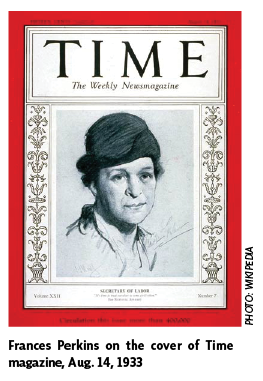 The last two decades of Frances Perkins’ life were characteristically productive. She served as the commissioner of the Civil Service Commission, which advocated for separating one’s private life from whether they were qualified to apply or be hired for a job. She lectured at the University of Illinois, and in the last few years of her life, was appointed as a faculty member at Cornell’s School of Industrial and Labor Relations. She became a member of the Telluride Association at Cornell, being the first woman to live at the house dedicated to scholarly thought and advocacy. She died in May 1965 as she lived — committed to the rights of the people, inspired by the unique surroundings of the pro-labor environment of New York.

Elise Frawley is a violist and a member of the Local 802 Executive Board. She has been a member of Local 802 since 2011. She can be reached at elisefrawley@gmail.com.