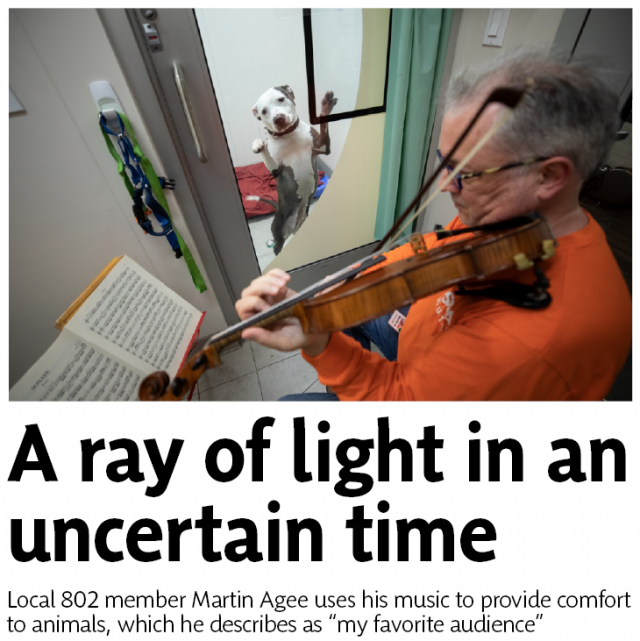 Photo above by the ASPCA

There are audiences of music lovers out there who have been waiting to hear their first live concert. And while their love of music is palpable, sadly many of them have never heard so much as a phrase or musical note. When they finally do, their response is a wonderful and breathtaking thing to see. It calms them. It nourishes them and touches them at their very core. They hear music in a way that many of us do not. And it has been said that for some of them who have lived at the edge of an abyss, it has literally helped save their lives.

Take Dottie, for example. The first time I met her, she was in a recovery ward for physical and emotional trauma. Although she was unable to speak to me about her ordeal, I talked to her in my most calming voice and asked her if she had ever listened to music. It seemed to interest her, so I took my violin out of its case. Judging from the quizzical look on Dottie’s face, I don’t think she had ever seen one. But as my bow touched the strings, her reaction was immediate and wonderful. She looked up at me with searching eyes and started wagging her tail. And when I finished playing a Largo by Handel, she barked in approval. (See her picture below.) 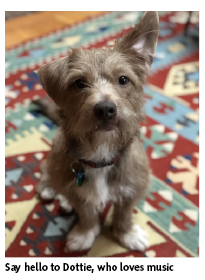 Dottie, a small gray terrier mix, was being housed at the American Society for the Prevention of Cruelty to Animals on the Upper East Side. The ASPCA’s Animal Recovery Center is a facility for the rehabilitation of animals that have been rescued from various circumstances of neglect, abuse or both. Often they will come in with acute physical injury or trauma that requires treatment, care and close monitoring by the doctors and staff at the facility. These men and women are dedicated professionals who care deeply about the helpless souls that have been brought in from who-knows-what kind of life on the streets or at the hands of some abuser. It is an outpost of hope for the helpless and less fortunate among us.

Ever since the story of my playing for dogs was first told, I’ve been asked how all of this came about. How did a professional musician find himself playing for dogs in an animal shelter? And…why?

The answer is quite simple, really. I needed my animal fix. It was long overdue. Those who know me are aware of the deep attachment to animals I’ve had my entire life. My daughter’s experiences riding horses and the adoption of an ex-racing greyhound (“Melody”…that was her racing name) kept me happily connected with the animals I loved for many years. But the loss of Melody to cancer in 2007 weighed heavily on me. For years I searched for a way to process the unfathomable, until finally one day in 2016 when the idea of volunteering at an animal shelter came up.

Knowing that it might well be intensely emotional for me to work around so many animals deserving of new and loving homes, it was with trepidation that I applied to the ASPCA to become a volunteer. I embarked on a rigorous training process and soon became an adoptions counselor, a role that involved matching potential adopters with an appropriate cat or dog. A hole in my heart was starting to mend as I saw deserving animals moving on to new and brighter chapters in their precious lives. But in those early months, I never once imagined playing the violin for them (although I will admit that on my application to become a volunteer I half-jokingly wrote that I could play music for cats and dogs).

Then one day I learned about a remarkable project, called the ASPCA Storytelling Program. Aimed primarily at animals who are recovering in the ASPCA Animal Recovery Center, it is considered a vital part of their rehabilitation and ultimate reintroduction to society as adoptable pets. Traumatized dogs are soothed and comforted by volunteers — kind human beings who literally sit nearby and just read to them from a book or a magazine or an iPad. Many of the dogs that enter the ASPCA Animal Recovery Center have suffered from cruelty and severe neglect. Some lack basic socialization skills such as walking on a leash or being handled and since many of them are not yet ready for physical interaction, there is no direct contact. The dogs are separated from the human volunteers by glass doors and windows, but they are able to listen and watch. This socialization technique increases the likelihood that an animal will be ready for adoption down the road, by decreasing stress and making them comfortable with new sights, sounds and people. I have to admit that the idea of reading “War and Peace” to abused dogs appealed to me on some level, but I asked if I could try playing Handel and Bach for them instead. I was immediately given the go-ahead.

Six months later I was still giving concerts to my new favorite audience as they barked and wagged their tails in the Animal Recovery Center and I adopted Jack, a big 11-year-old black-and-white boy cat with a Dali-esque mustache and spots like a Dalmatian. (See picture below.) I only had him a short two years, but we became best buddies during the time he had left. 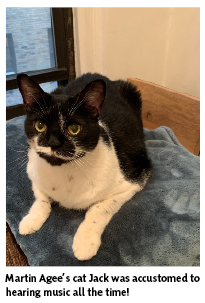 Except for when I practiced, that is. I still haven’t figured out where he was hiding when the violin came out of the case.

I did it because I needed to find healing, and the dogs (and Jack) gave me that and more. And at the same time I hoped that it might help my new and unexpected audience heal too. And while I can’t speak for the dogs, I can tell you that for me, the experience has been not only one of healing, but of affirmation, joy and regeneration during a difficult time. And now, in spite of my busy and often chaotic schedule as a professional musician, I still try to find time every week or two to drop by the ASPCA with my violin in hand.

Dottie isn’t there now, which makes me sad and happy at the same time. Sad because I really fell for that sweet girl and wanted her to come home and live with me. Happy, because I know she has moved on to a loving home in Maine, where her new adoptive owner tells me she runs on the beach and sleeps on a pillow with Bach and Handel playing softly in the background. 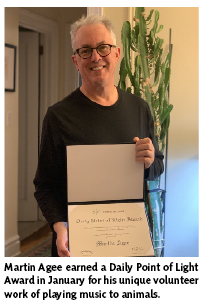 Martin Agee has been a member of Local 802 since 1981. In January, he was recognized by Daily Points of Light (www.pointsoflight.org), the world’s leading organization dedicated to the promotion of volunteerism and was presented with a Daily Point of Light Award in recognition of his work as a volunteer at the ASPCA in New York City. His work there was recently featured on NBC’s TODAY Show and related stories were published by USA Today, New York Daily News and Scripps Networks, among many others.