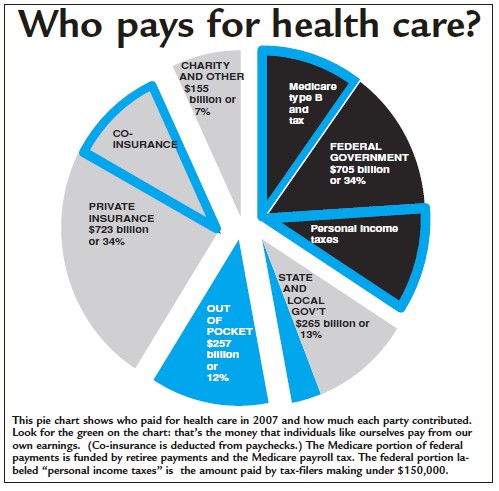 How often does your boss cry “rising health costs” as a main reason for denying you a raise? So often that it seems normal?

Well, that’s what employers would like workers to believe. But the truth is that employers take advantage of the health care crisis to weaken workers’ leverage.

For example, take the words of Allan Hubbard, an economic advisor to former President George W. Bush. Two years ago, he told the Wall Street Journal, “Employers are spending more money on health care, and that’s robbing people of wage increases.” In other words, if only health care costs weren’t so high, employers could pay workers more.

But in reality, the rate of increase in health benefit costs for employers has consistently declined from the third quarter of 2005. (See figure 1.) This influenced companies to place their employees in less generous health plans and make co-pays and deductibles higher. Figure 2 demonstrates the growth of less-costly HMO plans in the late 80’s through the 90’s.

Since 2004, employers curbed their health insurance expenses by enrolling their employees in high-deductible health plans. By forcing employees the choice of paying higher deductibles and out-of-pocket costs in return for a pre-taxed health savings account, these plans allow employers to drastically lower their insurance costs.

Therefore, the ideas espoused by Allan Hubbard and other employers do not accurately reflect conditions on the ground. Rather, they promote a big-business agenda that seeks to redefine the definition of fair employment standards for working people.

To put it bluntly, a new myth is being spun for us. That myth is this: “There’s nothing we can do about the rising cost of health care…it’s unavoidable that workers will have to contribute more and more.”

This myth is one that big business would like us to keep on believing.

And this myth makes it perpetually difficult for labor unions to raise prevailing standards of working conditions without givebacks.

And as workers lose power in labor markets, the effects prove disastrous.

Between the years 2000 and 2007 — characterized by intense rises in health care costs — 47 percent of all workers did not participate in employer-provided medical benefit plans simply because they could not afford it.

Eroding health insurance provided by employers, along with high out-of-pocket costs, saves employers money and forces workers to choose between incurring medical debt or providing their families with basic necessities.

Any health care costs are a challenge to low-income earners, but workers across all income levels face this dilemma. Because of conditions like these, half of the families that filed for bankruptcy during this time period reported doing so because of medical bills. Over seven years, this figure approximately translates in to 5 million families!

In a survey conducted by the Kaiser Foundation, 28 percent of adults reported a time in the past year when they chose to forgo medical treatment because of their inability to pay.

Likewise, 29 percent of adults said that they or a family member avoided filling a prescription, skipped recommended medical tests or treatment, or cut pills or skipped doses of medicine because of cost. The result: 56 percent reported that their condition worsened as a result. (See figure 3.)

Combined with these horrific figures, the current economic crisis compels workers to feel a sense of loyalty to their jobs as if their lives depended on it — which they do, because employers provide health insurance.

Employers use anti-union tactics that both stretch and outright defy the limits of legality. That plus a gloomy economy and an inadequate health system all combine to frighten workers from organizing unions out of the threat of negative reprisals from employers — such as termination — that occur regularly as a response.

The bottom line is this. Unions understand that employers take advantage of rising health care costs to weaken labor standards, pass the burden of health care costs on to workers, and force employees into accepting declines in working conditions as fair and legitimate. Most employers shrug off the societal problem of the underinsured and uninsured, which forces us all to pay more in taxes.

But make no mistake; despite such a harsh environment to negotiate under, collective bargaining agreements of unionized workforces secure advantages in median weekly earnings and health care compensation packages in comparison to nonunionized workers.

From 1999 to 2007, a period marked by declining real earnings and rising health care costs for all workers, union members earned over $193 more in weekly earnings than nonunionized employees.

Clearly, the experience of unionization continues to award working people with higher standards of dignity and respect in comparison to employers’ understanding of those terms.

Because uninsured and underinsured persons cannot afford to pay the full price of health services, they don’t seek care until their conditions are truly serious and therefore more costly to treat than if primary care were affordable.

Families USA reports that this “hidden cost” of covering the uninsured caused premium rates for New Yorkers’ family health coverage to increase $640 in 2005.

Furthermore, the study estimates this number will rise to $1,024 by 2010. Typically, in the state of New York, HMO’s are exempt from assessments, placing an even greater burden on other kinds of plans to cover the uninsured.

The underinsured are people whose insurance options leave them in plans with huge deductibles and high co-payments.

Packages that don’t provide payments for primary care are the fastest growing plans throughout the economy because they are cheap for employers. A recent study indicates that 31 percent of insured persons in high-deductible health plans report delaying or avoiding care, as opposed to 17 percent of those in comprehensive plans.

Likewise, when people control their own health savings accounts, they seek care less frequently to avoid costs they cannot afford. Unfortunately, as their conditions worsen, they incur even greater costs for treatment, same as the uninsured.

According to a Kaiser Foundation survey, almost 20 percent of adults did not receive needed medical services in 2005 because they could not afford them.

Similarly, persons without health insurance during some part of that year were more likely to avoid treatment due to costs than those covered for the whole year.

As a result, statistics indicate that the share of out of pocket costs and government health expenses both increased percent from the mid-nineties to 2005,

Consequently, the use of larger sums of the public purse to finance public health programs diverts tax dollars away from appropriately funding other social goods, like education and the arts.

This means that the true cost of health care includes direct costs to pay for health insurance; hidden costs added to premiums to cover the costs of uncompensated care for underinsured and uninsured persons; and the public costs incurred by taxpayers to support government health initiatives, like Medicaid and Medicare.

Unless the Obama administration acts to ensure health care access for all, anticipate each one of these costs to grow. The administration expects unemployment to remain above 6 percent until 2012, which means the number of Americans without health insurance will rise, which means everyone’s health costs will rise.

The social cost of this attitude is twofold. One is the toll on the health costs of the underinsured and uninsured. The other is the increase in tax payments by the middle class to fund the costs of publicly funded health programs.

The final article in this series will contrast the single-payer vs. private for-profit health care systems and examine the effects on care from both systems both nationally and worldwide.