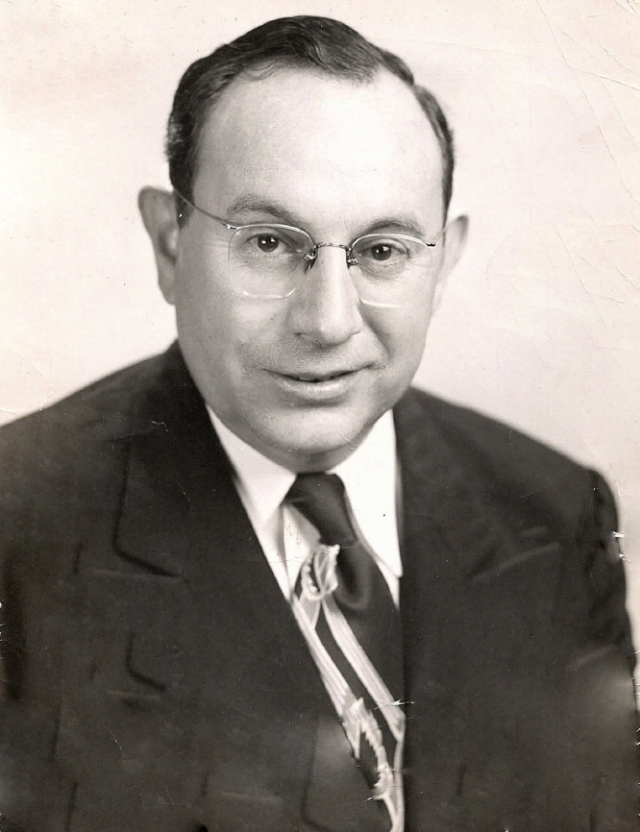 I was recently moved to write these reminiscences of my father, Samuel Raymond Goldberg, otherwise known as Stu Gordon. My dad was born on March 21, 1909 and was a longtime member of Local 802. He was a professional violinist, playing all around New York up until he married my mom in 1940. It was said that he quit the business for a “more respectable” profession upon charting a course towards a wife and family, which always sounded to me like something my mom’s mother (but NEVER my father!) would have felt or said.

Dad had come to New York to attend Juilliard, after having been the best fiddle player in the movie house pits of Erie, Pennsylvania, as a teenager. While in his second year at Juilliard, my dad needed to be let down gently that he wasn’t good enough — and never would be — for his dream to play with an important orchestra. My dad’s violin professor took him to a rehearsal of children playing Suzuki violin in the pre-college program at Juilliard, hoping that my dad would realign his perceptions of his own abilities more realistically. It worked. Pop was blown away by how good these kids were. However, the professor was compassionate to my dad, in his own funny way.  The professor said that my dad should quit Juilliard because “Toscanini wasn’t waiting for him” — but that he should still try to find work as a musician, any way he could.  Luckily, my father was able to piece together a joyous career, even if it wasn’t in a major symphony.

From what I remember and can piece together from the albums of photos he took, my dad must have had a pretty neat bachelor’s life in NYC. He found work with the Meyer Davis orchestra, played in the theatre pits (including one of the Ziegfeld Follies), played on the overnight trains to Miami (times have changed with Amtrak!), and then in Havana (which he liked to describe as a “wide open” city before Castro). He lived in Sweden for a while during his years playing on the Kungsholm, a cruise ship of the Swedish American line. Luckily for me, Pop loved to tell wonderful stories of his adventures in the business.

My father was a devoted trade unionist and socialist. At the polls, he often wrote in Eugene Victor Debs. His mother arrived from Russia on her own at the age of 14. She was a seamstress and became an organizer for the ILGWU before leaving New York to raise her family in Erie. She pinched pennies to buy my father his first real violin as a bar mitzvah present. I think it was an inexpensive German model from the 1860s — but he played that instrument the rest of his life!

My dad played with some locally well-known groups — including the Adelphi Chamber Music Society — and there were often string quartets in our living room (which as an ignorant kid I mostly ignored). And Pop walked around the house with the fiddle tucked under his chin most nights after work, accompanying my mom. She had a gorgeous, operatic soprano voice and had studied as a teenager at Steinway Hall, where my Russian immigrant grandparents hocked the samovar (so to speak) to pay for lessons.

After my dad quit the music business, he became a buyer of linens for department stores to put bread on the table, but he hated his job. He still played gigs when he could — but for the rest of his life, he hated all work that wasn’t related to music! 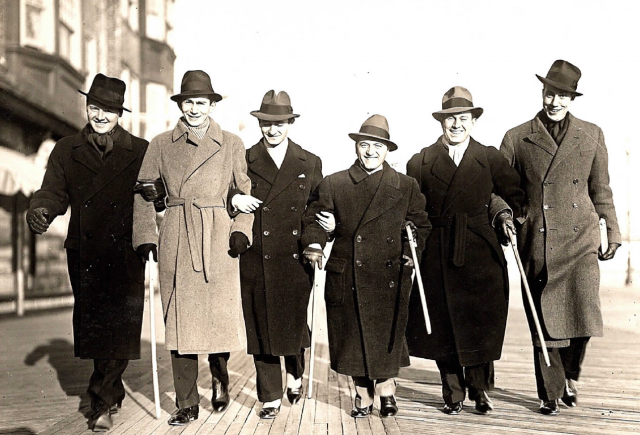 Samuel Goldberg (second from the right) walking in Atlantic City with fellow musicians from the Kungsholm, a cruise ship of the Swedish American line.

Dad schlepped me to Local 802 many times at its former Roseland Ballroom location on West 52nd Street. He loved to see who was around and kibbutz with old friends about what was what. I remember it as an old, unused rehearsal hall, with a proscenium stage, card tables scattered around, and a long table up on the stage with a phone that union officials would answer and mete out work to members. And there was smoke, smoke, smoke! I adored it. I would come home stinking of smoke and have to take off all my clothes for my mom to wash, while she admonished my pop, “Whaddya do? Take him down to Local 802 again?”

And in the house, on a table in the living room, there was always an Allegro or two. Back then, it was a few pages of news and reports on plain newsprint, but what I loved the most to read and talk about with Pop was the back-page “blacklist” of members who had been caught playing nonunion gigs in what Pop and I always called “scab” venues. I loved to look for names I knew and proudly proclaim that so-and-so (every now and then someone famous) was a “stinkin’ scab.” In fact, Allegro was how I earned my chops both as a reader and trade union “leftie” some 65 years ago. I was sorry to hear that Allegro stopped publishing in print last year due to the economic crisis of the pandemic, but I’m glad my reminiscences will appear online for others to read.

I know I’m rambling. Forgive an old man, would ya? I was blessed to have the father I did, and I thank Allegro for playing a small part in filling in the color of who I was to be — and who I still am. I’m proud when people refer to me as “a real character — just like your old man.”

My dad died on Feb. 3, 1978 at the age of 68, after suffering a heart attack at a Sunday morning rehearsal of the Adelphi Chamber Music Group. He lives on inside of me — and so he lives inside of all those whose lives I’ve touched. 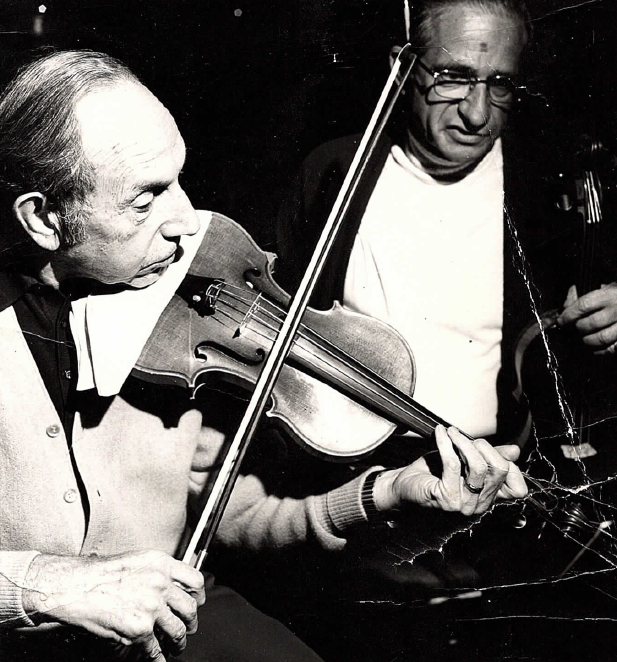 Samuel Goldberg (in the foreground) with his best friend Irving Starr, who he called his “buddy boy.” The two played together in the Adelphi Chamber Music Group.