Passing the torch from one generation to the next is one of the most sacred duties an artist can fulfill, and that’s what Local 802 members do each year at the NYU Broadway Percussion Seminar. The deadline to apply is April 30, so it’s a good time to look back on last year’s program, which opened with NYU Percussion Program Director Jonathan Haas welcoming attendees from around the world. Haas set up an environment of openness from the start saying, “There are no grades. You can’t mess it up!” He offered some of his own wisdom on crafting a career in music, which included the advice to create diverse streams of income, and he called New York the “greatest city in the world – absolutely no doubt!”

The first presentation began on a Sunday night with NYU graduate Jordan Brooks, a current member of the New York cast of “Stomp.” Brooks studied at Berklee, then later earned his master’s at NYU in 2016. He gave a short demonstration of the fundamentals of body percussion and improvised instruments, before leading the participants in an active creation of a groove using those concepts. He also gave a sense of the scale of the support required for a production like “Stomp,” including the fact that the production keeps a physical trainer on staff for the cast and periodically replaces the entire performance floor!

Monday morning began with Broadway veteran Javier Diaz of “On Your Feet.” Diaz, a Cuban-born percussionist specializing in both Afro-Cuban instruments and Western classical percussion, told the story of his career, which took him from Cuba to Venezuela to Los Angeles (for college) and finally to New York City. In what would become a common theme of the presenters, Diaz said he never planned to play on Broadway, and also reminded the participants that “Broadway is very diverse in terms of the skill sets that you need.” Diaz spoke about learning the music of Gloria Estefan and Miami Sound Machine with some of the players from that band, and how he adapted that music to his Broadway style. He offered his experience to the participants about physical training and maintaining his health in order to play hand drums so intensely. 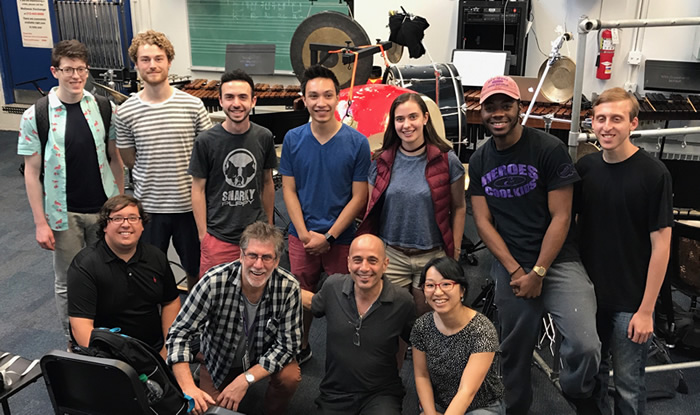 Next up were Ray Marchica and Chihiro Shibayama, both representing “Miss Saigon.” Marchica is the show’s drummer. He studied with Arnie Lang and finished school in 1976, while Shibayama, who plays the percussion book, finished her graduate degree at Juilliard in 2009. Much of the discussion focused on the show’s massive setup, easily one of the largest. They told the attendees how instruments for the show came from multiple places, including a warehouse that held some from the original production. Each of them demonstrated mallet choices and discussed the reasoning behind them, all of which fell somewhere on a spectrum between authenticity and practicality.

The final presenter of the day was Andy Blanco of “Hello Dolly,” which won a Tony Award in 2017 for Best Revival. Blanco explained that this particular percussion book is a great example of “standard” Broadway percussion. He used it as an opportunity to focus on the details of playing within simplicity. Blanco also discussed the process of working through initial rehearsals. He told the students that you never get the music ahead of time, but he also said that it’s good to find out what percussion will be used in the show so you can practice sightreading on those instruments ahead of time.  He discussed the dynamic balance in his Broadway playing and how he tries to play consistently at each show to avoid adding extra demand on the sound engineers.

Tuesday began with percussionist Charlie Descarfino and drummer Warren Odze presenting “Charlie and the Chocolate Factory.” Each of them has decades of experience playing on Broadway, which made this session function as our seminar’s annual “Sages of Broadway” presentation. Descarfino focused mainly on encouraging the attendees to “play bigger” and create musical gestures through their phrasing and dynamics. Odze continually focused on issues of ensemble playing and working with the conductor. He also encouraged players to exercise their own musical instincts to bring the music to life, even if it means overlooking or even disregarding some musical notations on the page at times! Descarfino and Odze both talked about preparing their subs well and said that the current Broadway environment is much more supportive toward substitute players than it was when they began their careers.

Tuesday afternoon featured the seminar’s “Super Subs,” including two clinics by David Nyberg and Kory Grossman, both of whom have been playing on Broadway for years. Grossman spoke about his experience playing on “Fiddler on the Roof” and “Sunday in the Park with George.” Nyberg repeatedly impressed on the participants the importance of not trying to push or force their way into a substitute role, and spoke about his experience with shows like “Phantom of the Opera,” “Mamma Mia,” “The Lion King,” “Aladdin” and the original production of “Miss Saigon.” Nyberg said that every sub must learn to do what the regular does – adding that the highest compliment a sub can receive is for fellow musicians to say they didn’t realize the regular was out for that show.

Tuesday night featured Mike Ramsey, an experienced sub and a regular for the end of the run of “Paramour.” He taught his session on hand drums and African drumming styles. The class used various types of drums, from djembes and congas to kpanlogos and doumbeks. Ramsey primarily focused on the traditional rhythms of Guinea and Ghana. He set up a massive drum circle and allowed students to trade solos. 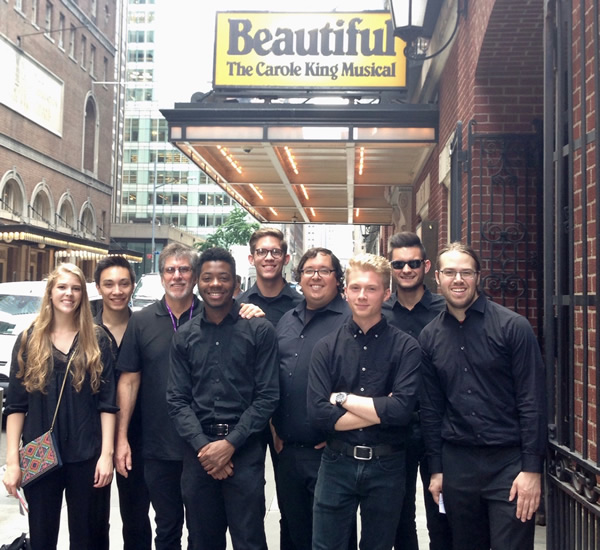 Wednesday morning began with a session on college admissions led by members of NYU’s own admissions department, but that was just a prelude for the truly unique element of the seminar, which was to come that evening. Every attendee was given a ticket to a Broadway show and was set up to go into a pit and observe the players during the show. This incredible experience really brings into focus the topics discussed throughout the week and offers a view of Broadway that few are fortunate enough to see.

That same day, in between the matinee and evening show times, all of the participants gathered for the annual session at Local 802. Recording Vice President Andy Schwartz gave an invaluable presentation on the work of the musician’s union. “The union creates power for musicians,” Schwartz said. He said that thousands of members of Local 802 have played  on Broadway in some way, and gave an insightful explanation of the many benefits of union membership. He discussed contract negotiations, health insurance and pension, and he educated the students about how Local 802 contracts compensate musicians who double on more than one instrument.  The participants walked away extremely appreciative for the information  Schwartz had provided and felt that the future of music on Broadway was in very good hands.

The final clinic presentation of the week featured drummer Clint de Ganon and percussionist Joe Passaro, who Haas referred to as “the icons of Broadway.” They presented the music of “Beautiful” and also spoke about the reality and the struggle of creating a career in music. De Ganon said, “It’s very difficult. It involves a tremendous amount of sacrifice.” Passaro, who has been working in New York since 1972, told the students, “You have the best musicians in town playing Broadway, because Broadway has become the best work available due to the decline of the recording business.”

The seminar closed with a roundtable featuring all of the presenters, as well as NYU alumni Andrew Beall and Adam Kiefer, and Broadway contractor John Miller. While the clinics had a strong focus on musicality and performance techniques, this session was entirely focused on business and professional issues. Haas asked the participants to each introduce themselves a final time and to speak about their takeaways from the experience, before the discussion featured Miller and his process of hiring players for shows not only on Broadway but in other venues as well. Miller constantly reiterated that being an outstanding player was critically important, but that being an individual who people enjoy working with is just as necessary to maintain this line of work. The discussion was the perfect ending to an incredible week. Participants and presenters laughed, shared stories and enjoyed the experience of a lifetime.

If you know a music student who would benefit by signing up for the next percussion seminar, scheduled for June 10 to June 14, please see http://steinhardt.nyu.edu/music/summer/percussion. The deadline to apply is April 30.