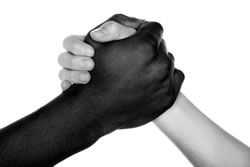 In 1886, Walter Craig, a black violinist residing at 103 West 29th Street, quietly joined the otherwise all-white New York musicians’ union, the Musicians’ Mutual Protective Union. Others followed. By 1910, about 300 black musicians had joined the MMPU, comprising a small but not insignificant segment of the roughly 8,000-member union. By 1920, their ranks had swelled to about 600.

Integration alone, while no immediate benefit to the musicians who joined, represented a notable accomplishment. Many American Federation of Labor unions barred black members entirely, and musicians’ unions, in most cities, proved no overwhelming exception. Many maintained segregated locals or excluded black members entirely, even into the 1960s. But New York black musicians of the late 19th and early 20th centuries ensured that their union drew no strict color line.

They did so with two strategies and in two phases. Until around 1910, black musicians established themselves as professionals in the same way that white musicians did. They learned classical music, developed musical skills, and established financial solvency through their art. Since the union organized professional musicians, and these musicians proved themselves as professional as any others, the union had no choice but to accept them as individuals. After about 1910, musicians increasingly joined the union by doing the very opposite. They drew on black vernacular music to create popular music, organized themselves, threatened to undercut the power of the union by creating their own union, and, essentially, forced the union to accept them as members.

The origin of the MMPU, and through it Local 802, dates almost to the beginning of organized labor in the United States. In 1860, a number of German-speaking New York musicians banded together to form the first musicians’ organization that could be called, in any modern sense, a trade union. The Aschenbroedel Club intended to further “the promotion of good feeling and friendly intercourse among the members of the profession, and relief of such of their members as shall be unfortunate,” but it also, more practically, set uniform wages and created professional standards for musicians. It was as much a social and cultural institution as it was political and economic. It aimed, at least in New York, to make music “high art” and musicians an elite class. The club, wrote its members, would facilitate “the cultivation of the art of music in all its branches.” Soon, outside New York, the idea caught on. Musical trade unions, now titled Musicians’ Mutual Protection Unions, sprang up in cities around the East Coast and Mid-West. By 1886, several of the unions federated into a loose organization they named the National League of Musicians.

The League was an exclusive and highly protective organization. In its founding convention, it recommended, “a rigid examination of application for membership…[to stop] imposters and impecunious musical quacks from practicing their knavish arts and infirm capacity in public.” More so, it disdained association with the working class. Musicians, the League rigidly declared until its demise, were artists, not laborers. Despite whatever resemblances the League may have had to the growing trade union movement, the League eschewed any alliance with the rapidly assembling House of Labor. Both the Knights of Labor and the American Federation of Labor petitioned the League to join their organizations. The League refused. Musicians, said the head of the New York union, Alexander Bremer, would never “cast their lot” with “stovemakers” and “shoemakers.” Bremer might as well have spoken for the whole organization. The New York MMPU, the first and largest of the League’s unions, dominated its conventions, its policies, and its stringent disassociation of musicians from workers. Through a crooked proxy system, the MMPU gained the most votes out of any in the League’s conventions, practically disenfranchised smaller locals, and set out to ensure a class status for musicians far different from laborers in any other industry. New York musicians, notes the historian James Kraft, saw themselves not merely as a kind of artistic elite, set above most workers, but also a musical elite, the most highly respected and successful of a noble, artistic profession.

But if the New York union had high artistic and social standards, it became at least tolerant of black membership. No provisions in the bylaws of the Musicians’ Mutual Protective Union ever prohibited black members even as it excluded recent immigrants. In 1885, the union was open only to “all instrumental performers, who have been residents of the United States for the period of six months previous to application.” But it ensured that, otherwise, “all efficient and capable professional Instrumental Performers shall be eligible for membership.” Nominally, then, the MMPU was open to black membership and remained so even as it changed names and affiliations.

In 1902, the MMPU joined the American Federation of Musicians and became Local 310 (which ultimately became Local 802 after a dispute with the AFM, 19 years later). The AFM itself was created from a need to unify musicians’ unions. When the NLM refused to join the Knights of Labor and the AFL, both expanding federations took it upon themselves to organize musicians. Both created their own musicians’ unions, and dual unionism often became the result. Some cities had three or four or many more musicians’ unions all competing for members and undercutting each other for jobs. The situation became intolerable, to say the least, for musicians’ unions, and so in 1896 organized musicians from the AFL, the Knights, and some in the NLM founded the American Federation of Musicians, merged most of the competing locals into single unions, and established a governing body to oversee all locals. The Federation received an immediate charter from the American Federation of Labor and elected a rather bureaucratic former musician named Owen Miller as its leader.

More importantly, the Federation made some dent in the pervasive notion that musicians had no common cause with workers. The AFM’s premise, far more modest than that of the League, was that “all men and women playing musical instruments and receiving pay therefore from the public must, in order to get just wages and decent working conditions, form a labor organization.” From its formation, the Federation functioned on the philosophy that musicians were workers, not elite artists, and that trade union practices benefited musicians. New York musicians, the most talented and highest paid in the country, resisted. As the Federation expanded and engulfed practically every union in the NLM, the New York MMPU remained stubbornly outside it. Only in 1902, with only three locals left in the League, did New York’s musicians catch hold of the trends in their industry and join the American Federation of Musicians as Local 310. It was a tenuous commitment. For many years, the New York local maintained a strained relationship with the Federation, often uneasy with the Federation’s association between musicians and laborers.

So far as black musicians were concerned, however, the new affiliation had little effect. Membership qualifications did change, becoming more open to women, and less open to immigrants. “All professional musicians of either sex,” Local 310 declared, “[who] have declared their intention to become citizens, and are of good character, shall be eligible for membership.” But, throughout, black members were never explicitly barred from membership, and they joined in small numbers. By 1910, 362 black musicians had entered the union and made up roughly four percent of the membership.

African-Americans’ entrance into Local 310 reflected the initial purpose and values of the union. Simply put, the union protected the professional status of musicians, enlisting those it deemed professionals and excluding those it did not. To become a “professional” musician entailed two criteria.

First, like any professional group – doctors, lawyers, or clergyman – musicians needed to acquire a set of skills and knowledge. In order to join the union, musicians had to pass an examination of musical proficiency.

Second, at least in the early years, professional musicians needed to earn a stable income from playing music. No matter his ability, a musician who played music part time and worked a menial job could scarcely be called a professional.

The union enforced this provision through a practical arrangement. Musicians had to pay an initiation fee and monthly dues. For a musician who made less money playing music than the union demanded he or she pay, the union could only have been a burden or, even, an unattainable burden, and in New York, the union took pains to make it unattainable for all but the most successful. The MMPU set the initiation fee at $100, a fee so exorbitant that it exceeded most other local unions’ initiation rates by $75 to $95. In doing so, New York musicians ensured that musical professionalism also connoted a vague class status. Union members were “professionals,” not workers, and certainly in a different class than amateur musicians. They were to be dignified and respected. For its entire history, the union and its members would guard the professionalism of their craft and make the “professionalization” of musicians among its central concerns.

In Local 310, black musicians who became undeniably professional entered the union. That no black musician joined the union prior to 1886 seems less a result of overt prejudice or exclusion and more one of numbers. Prior to the 1890s, blacks made up only a small percentage of New York’s population and only a handful of its musicians.

In the 1880s, remembered the performer Tom Fletcher, “There were only a few colored musicians around New York City because most of those who lived in New York were on the road with various shows.”

The challenge for black musicians was to become a professional. How to overcome that challenge became the focus of their activities.

This article was excerpted and edited from Jacob Goldberg’s “Swingin’ the Color Line: African American Musicians and the Formation of Local 802” (available at www.Lulu.com). A version of this article previously appeared in Allegro.