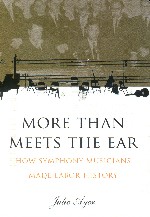 “More Than Meets the Ear” is the story of a grassroots movement that transformed labor relations and the professional lives of U.S. and Canadian symphony musicians. The struggles and accomplishments experienced by many visionary leaders of the 1950’s, 60’s, and 70’s offer inspiration to new generations of musicians, students, teachers, music lovers, labor historians and orchestra administrators. Written from the perspective of a professional orchestra musician who has experience in committee activity and labor negotiations, “More Than Meets the Ear” is an overview of the profound effect the musicians’ labor movement has had on the profession. 802 counsel Leonard Leibowtiz reviewed the book for Allegro.

Julie Ayer is the assistant principal second violin with the Minnesota Orchestra. After a relatively short — but stressful — employment with the Houston Symphony after music school, she joined what was then called the Minneapolis Symphony in 1976 and has been there ever since.

Beginning with that early stint in Houston, she gradually became more and more involved in labor relations. She served as a delegate for ICSOM and has been a general activist and muckraker. She has been researching and writing this book for a number of years. It was worth the wait.

In discussing the importance of ICSOM, Ayer quotes an article written by one of the early editors of the ICSOM newsletter, Senza Sordino. In the article, Henry Shaw wrote:

“To tell what has transpired since 1962 should become a part of new member orientation. It must be emphasized that ICSOM is an investment and it must be protected. Perhaps an occasional reminder of difficulties that had to be dealt with is in order, along with the admonition that history can surely repeat itself where complacency becomes the order of the day.”

That sentiment is reflected too in Ayer’s description of the origins of her fascination with the labor history of symphony musicians.

“When I joined the Houston Symphony Orchestra in the winter of 1976, I had no idea of the problems ready to erupt there. During my brief membership in that orchestra, my eyes were opened to the basic principles of musicians’ committee involvement, the importance of speaking with one voice, unanimity of purpose, and strong representative leadership. I realized quickly that no amount of violin practice or freelance experience could have prepared me for all of the nonperformance obligations in an orchestra. Through the impressive example of the Houston musicians, I began to understand the fundamentals of organization, committee work, and labor negotiations. I also began to learn of the history of this labor struggle, not only for the Houston musicians, but for musicians all over the United States and Canada. Six months after my first concert, the Houston Symphony Orchestra management locked out the musicians in a bitter labor dispute. I regretfully left the orchestra to resume auditioning.”

The description resonated with me, as I was called in toward the end of that horrible lockout in 1977 to help fashion a settlement that nobody liked, but without which, in my opinion, the orchestra would have folded.

In addition to the eminently readable history of the AFM — including the notorious Petrillo years, the agonizing birth of ICSOM, the history of labor negotiations in the Minnesota Orchestra, the issue of civil rights, and the bias against women — she has also attached summaries of every labor negotiation in the Minnesota Orchestras since 1965, including the participants and the results.

Ayer describes in some detail a number of the more bitter battles with the AFM, like Petrillo and the Chicago Symphony musicians, between musicians and their locals (like the endless battles in Cleveland), and the extraordinary efforts to finally get the musicians of the Boston Symphony Orchestra under union contract.

She identifies and describes the efforts of the founders and early officers of ICSOM, including George Zasofsky, the first chairman (ironically, from the BSO), and San Denov from the Chicago Symphony, who was the first vice chairman and second chairman. (Denov himself has written about his involvement in the deposing of Petrillo and his days as an ICSOM officer.) Ayer also writes about others, too numerous to mention here.

In sum, this book is indeed a worthwhile read for all labor activists, whether in the music industry or not, and I believe it should be required reading for young musicians in conservatories who need to understand that there is one more “B” after Bach and Beethoven, and that stands for “Bread”! 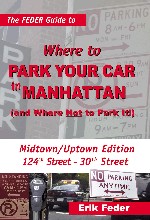 “The Feder Guide to Where to Park Your Car in Manhattan (and Where Not to Park It!)” By Erik Feder (Rhythmo Productions, 2005)

Having a tough time deciding whether it’s practical to drive your car into Manhattan for that upcoming gig? Help has finally come in the form of two editions of “The Feder Guide to Where to Park Your Car in Manhattan (and Where Not to Park It!)”

One-way streets are sequenced in the direction of traffic, enabling easy traceablility, and the guides make use of “smiley-face” and “frowny-face” icons in order to indicate whether a block is particularly good or bad for parking.

Every parking garage is also listed (more than 450 in both guides combined) including the hours of operation and the phone number.

Violations and corresponding fines are also included in case you want to do risk-assessment before knowingly parking in an illegal spot, and there are even tips for what to do if your car is missing, towed or ticketed.

As anyone who drives a vehicle in Manhattan knows, trying to park can be very frustrating but these books can minimize the hassle by increasing your chances of finding a free or cheaper spot to park your car. Even locating an inexpensive garage could save you more than the price of these books. The Web site hosts a forum to allow for a growing community of informed drivers — this is the place to post feedback, share personal experiences and find updates/changes to parking regulations.

The books can be purchased at any retailer, but for less money they can also be downloaded as PDF E-books at www.WhereToParkManhattan.com. If you buy both editions there is a discount.

SPECIAL NOTE: Local 802 members who purchase from the web site can receive a special discount. Enter coupon code “Allegro1” on the checkout page for $1 off either book or “Allegro2” for $3 off the set of two.