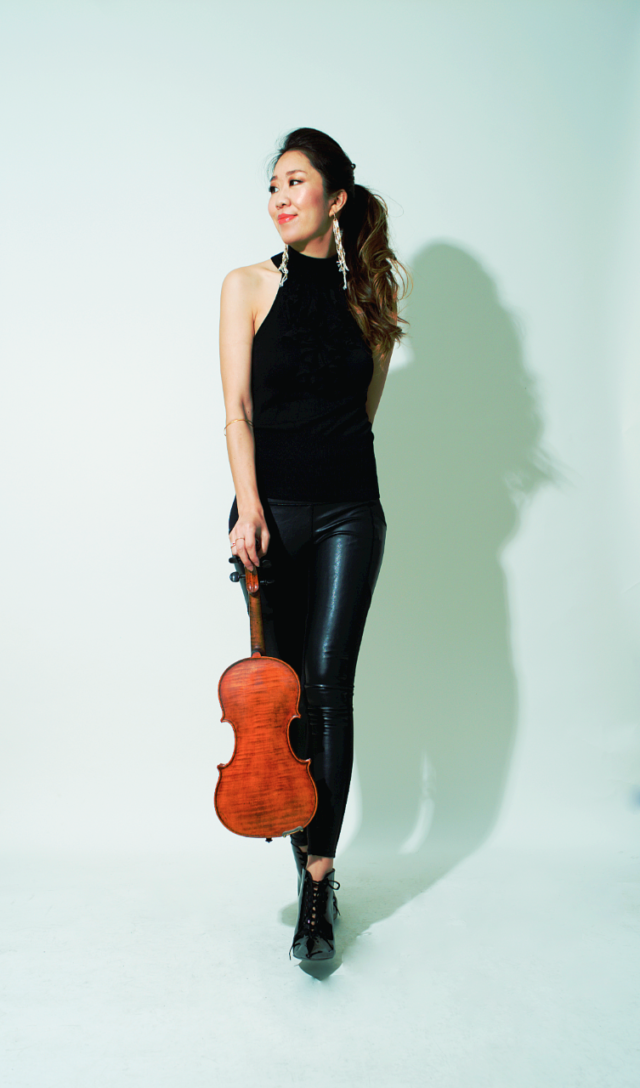 Violinist Tomoko Akaboshi started her career as a musician at age 20 while attending the Tokyo College of Music, and has since performed with or coordinated for internationally renowned artists such as Alicia Keys, Coldplay, Alan Silvestri, Andrea Bocelli, Maria Schneider and others. Her performance experience has extended to soundtrack recordings, orchestral concerts at Carnegie Hall, a jazz quintet performance at the White House, and a variety of music theater productions including “Amazing Grace” on Broadway (where she served as concertmaster), the Off Broadway production of “Sweeney Todd” and Tokyo productions of “Spring Awakening” and “West Side Story.”

In addition to performing, Akaboshi has a wide range of experience coordinating, music supervising and translating for musical productions. She has coordinated and supervised orchestral sessions in the United States, Japan, Germany, Australia, Slovakia, Bulgaria, Hungary and the Czech Republic for film and videogames, including “Street Fighter 5,” “Resident Evil 6” and “Monster Hunter World.” As a bilingual coordinator, she has also worked as a cultural liaison for Google, the Boston Symphony, the Tokyo Philharmonic, the Czech Philharmonic, Lincoln Center, and the Japanese Agency of Cultural Affairs.

Aspiring to connect Japanese and American cultures, Akaboshi founded the Tokyo Strings Workshop in 2012. The workshops bring established American musicians to Tokyo, providing a source for Japanese strings players to learn to play contemporary American styles like jazz and bluegrass.

Allegro: Tell us about your musical background, and your journey to becoming a musician in New York.

Tomoko Akaboshi: I started the violin at age eight, about two years after my family and I moved to the United States from Japan. We moved to Philadelphia for my father’s job, so from age 6 to 15, I grew up and trained classically in Philadelphia and a little bit in Westchester, New York. After middle school, I went back to Tokyo for high school and college. A teenager in the States being thrown back into Japanese society took some adjustment. At the time, Tokyo had an abundance of studio work, so I started to play in the studio and pop scene while attending Tokyo College of Music. I loved collaborating on acts with singers, actors, and performances with visual aspects using lights and sound effects and was drawn to theatre after I graduated. My first theatrical playing experience was the musical “Spring Awakening,” when the production was brought over to Tokyo from Broadway. I started rehearsals before my graduation, and we continued with small tours around Japan for a little over a year. I made some of my best friends there. During that time in Japan, I did every job that came my way. Of course, the playing gigs, but any translation job or production assistant job, to working in a Chinese restaurant! While freelancing in the studio, TV and theatre scene in Japan, I felt limited in my ability to read chord charts and improvise – classical musicians don’t typically receive training in improvisation in school. That I needed every note written out for me to express myself on the instrument began to bother me. As a result of that revelation, I looked into taking lessons with jazz violinists in Boston and New York. I found Rob Thomas, a jazz violinist teaching at Berklee College of Music, and just like that, I decided to leave my gigs and move to Boston with one suitcase and my violin. I didn’t plan too much; I was convinced that everything would work out and I would enjoy my time in Boston. And I did. I found a room with a curtain for a door, windows that periodically fell out, and a floor with at least ten years of grime built up, and somehow I still had a blast. I studied with Rob, took theory lessons from friends, went to jam sessions and concerts almost every day, and had a truly special time learning to improvise and opening doors to a world outside of classical music. After about a year in Boston, I decided I wanted to explore the music scene in NYC. I fell in love with chamber jazz and alternative styles of string playing that I was never exposed to in Japan, and dreamed of playing on Broadway someday. My first few years were rough – I didn’t know anyone so I simply didn’t have work. I felt lonely and lost during those times. But by going through that difficult period, I learned to be resolute and gracious for any opportunity to play for a living. And that’s how I became a musician in NYC.

Allegro: When you got the job to contract an Off Broadway show (“A Strange Loop”), we noticed that this was most likely the first time a woman of color – and the first time a female immigrant – served in such a role. What has the experience been like for you?

Tomoko Akaboshi: Playwrights Horizons welcomed me with open arms and it has been a truly fulfilling experience. It’s a big deal for the producers and creatives to choose a contractor with whom they have never worked. I think those people are the change makers of the theatre industry today. As a woman, and especially a woman of color from a different country whose first language isn’t English, I’ve always felt I have to work twice as hard to be taken seriously or considered equal. That self-consciousness persists in many of my professional endeavors, and I think that’s something that a lot of women, minorities and immigrants deal with in their daily lives. If the music community can make it a priority to empathize with this plight, we’ll be much closer to crafting a truly inclusive work environment.

Allegro: What’s your next project, and what are your musical goals going forward?

Tomoko Akaboshi: I have so many things I want to do! I’m currently assembling a contemporary chamber jazz ensemble, and I’m always attending string workshops to find ways to improve the Tokyo Strings Workshop. I just came back from Poland, spending a week getting personally re-acquainted with rhythm, theory, and music all over again and it was a truly inspiring experience.

There are a few music projects that I’m coordinating for Japanese companies. Some involve bringing productions from Asia over to the U.S., and some will require me to fly to Europe to manage and supervise orchestral recording sessions.