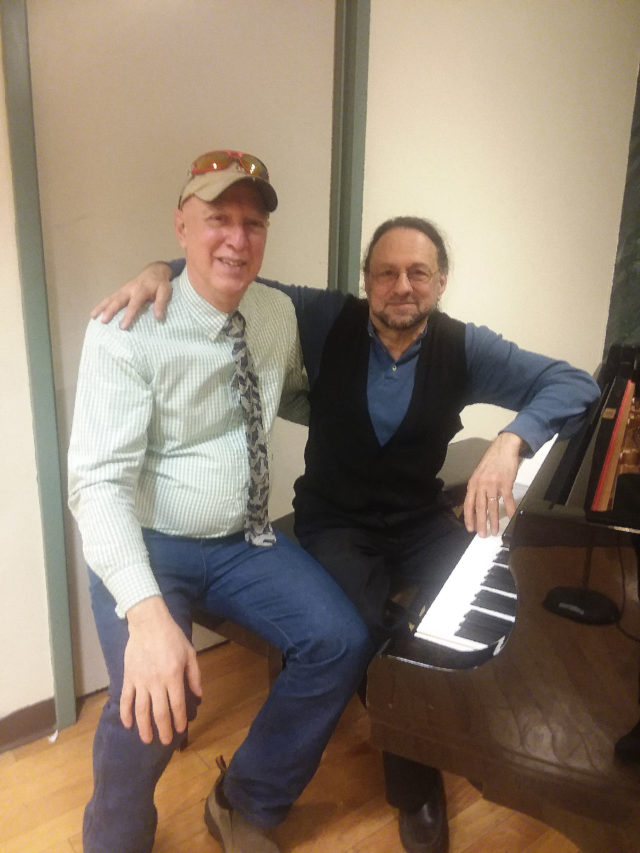 Local 802 members John Campo (left) and Lewis Porter began a musical collaboration as a result of networking through the Actors Fund.

For some musicians – especially introverts – it can be frustrating to realize that finding new gigs can depend on socializing, schmoozing and networking. Luckily, there is help! The Actors Fund (which, despite its name, is for all artists) has programs in place for musicians to meet new faces, share their knowledge, and brainstorm strategies for building opportunities. I am the career counselor supervisor there, and I can tell you that the absolute best part of my job is  meeting performers and hearing their unique stories of how they forage and manage a creative path through life.

A consistent underlying theme emerges about opportunities that develop through collaboration and relationships with other artists. It was great fun to talk recently with guitarist John Campo and jazz pianist Lewis Porter, who met at an Actors Fund networking event last year. The two have forged a warm friendship and professional relationship leading to a demo CD of John’s songs, which John is promoting for gigs at venues up along the Hudson River  – and in Italy, too!

John has been in the music industry for over 50 years, working in all styles. He studied at the New School with Ron Parker and in Jazzmobile with Billy Taylor and has been a composer and recording artist for Kapp Records as both a backup musician and as a leader. John attributes his love of music to his parents. From his mother’s love of big bands, he discovered that he had a natural ear for orchestration, even before he learned to read music in later years at the Guitar Center. His dad played the mandolin and guided him to play the guitar. Father and son played weddings, VFW gigs and church gigs together. In the 1970s and 80s, John played at and helped run the club Seventh Avenue South, which was managed  by Michael and Randy Brecker. (John also helped build the club with his own hands.) He also helped manage Studio Rivbea for Sam Rivers, with whom he recorded in 1977. As the years went on, John continued to teach and play while also leveraging his incredibly diverse skill set. He worked as a union carpenter (he worked on the Jazz at Lincoln Center complex), writer of mystery novels (they’re real page turners, according to Lew!) and professional cyclist (he won a New York state biking championship). His interest in cycling began in his youth, also inspired by his dad. He has coached competitive cyclists and ran the Velodrome in Queens during the Bloomberg years. He also advocated for connecting inner city youth and under-served young people around the world to cycling and is pleased that he continues to hear from the cycling community – including, not long ago, from a cycling contact in Rwanda. John asserts that competitive sports taught him how to deal with losing, a necessary strength for musicians.

Retired from his carpentry and cycling careers five years ago, John is enjoying the freedom to focus on his music. He reports that he has written 50 to 60 original tunes and 500 “radical” arrangements since the early 70s, from which he and Lew selected songs for their joint venture. As a lifelong union member, John has been a regular participant in networking with the Actors Fund, where he shares stories and encourages younger musicians.

John told me, “Through networking with the Actors Fund, I personally have taken responsibility for my place in this profession. I’ve relived the question about my future in a new light and adjusted its authenticity. A balance can be struck; mistakes need not lead to failure. Helping others makes us better people and professionals.”

Lew Porter knew from age 10 that he wanted to live his life as a jazz pianist. His educational journey led him toward a master’s program in psychology, thinking he would work as a therapist to support his jazz habit. Then, while teaching music at Tufts University, he was taken under the wing of composer T.J. Anderson, chair of the music department and “the person who tricked me into a PhD in musicology.” What followed has been a rewarding career.

Lew is widely recognized as a jazz educator, researcher and author of articles, textbooks and biographies, most notably of a celebrated volume on John Coltrane. A longtime music professor at Rutgers University in Newark, he has also taught at the New School, Manhattan School of Music, NYU and Brandeis. Lew currently writes an occasional blog for WBGO, where he discusses Art Tatum, Coltrane and others.

Throughout his academic career, Lew has continued performing, composing and recording. He earned a Grammy nomination and has collaborated or recorded with Dave Liebman, Marc Ribot, Gary Bartz and many others. His 2018 album “Beauty And Mystery” features John Patitucci, Terri Lyne Carrington and Tia Fuller, and his latest and 29th album is  “Solo Piano” on the new label Next To Silence.

Lew told me “I loved teaching, but not as much as I loved playing.” He decided a few years ago to shift his focus away from jazz research and writing – which he reports he does “the hard, slow way” with lots of primary source interviews and research – to practicing and playing full out. While Lew knows “a lot of cats” from his career so far, he has been feeling some frustration at getting attention from club owners as a player rather than as a writer/academic. He networked with the Actors Fund out of curiosity and states that, in addition to meeting John – resulting in a new project – he realized that even though he employs a publicist, he needs to cultivate his own relationships directly with fellow musicians, industry and media contacts, with intention! In fact, he reports promising feedback from recent outreach he has initiated around his latest album.

While talking with John and Lew in the small hallway between the Club Room and Room B at Local 802, the two regularly turned to each other as they picked up on the music coming from the practice rooms, commenting on the arrangements or connections they shared about the tunes. Our conversation was also punctuated by the comings and goings of the various practicing musicians who recognized and greeted Lew and John as comrades.

As embodied in John and Lew’s stories and warm relationship, networking with the Actors Fund offers a generous community conversation, an informal collaboration to support the creativity and resiliency of working musicians throughout their careers.

The Actors Fund is currently planning its musician networking activities in 2020. Send an e-mail to Patch Schwardron at Pschwadron@actorsfund.org for more info.

Patch Schwadron is the career counselor supervisor at the Actors Fund.

Looking for counseling? Help with substance abuse? Someone to talk to about finances, affordable housing or health insurance? We’ve got you covered! The Actors Fund provides all kinds of free social services to professional entertainers, including members of Local 802. Members of Local 802 can call on the Actors Fund for almost any kind of free help you can imagine. Start at (212) 221-7300, ext. 119 or IntakeNY@ActorsFund.org or ActorsFund.org.