As you may remember if you voted in the 2018 Local 802 election, listed at the bottom of the ballot were positions to serve as delegates to various labor organizations. Most of us don’t hear a lot about these positions before the election but have a vague sense that they might be important. In 2018, Caryl Paisner and Bill Hayes were elected as Local 802’s delegates to the New York City Central Labor Council, AFL-CIO. Below, they report back from their first NYC CLC delegate meeting. 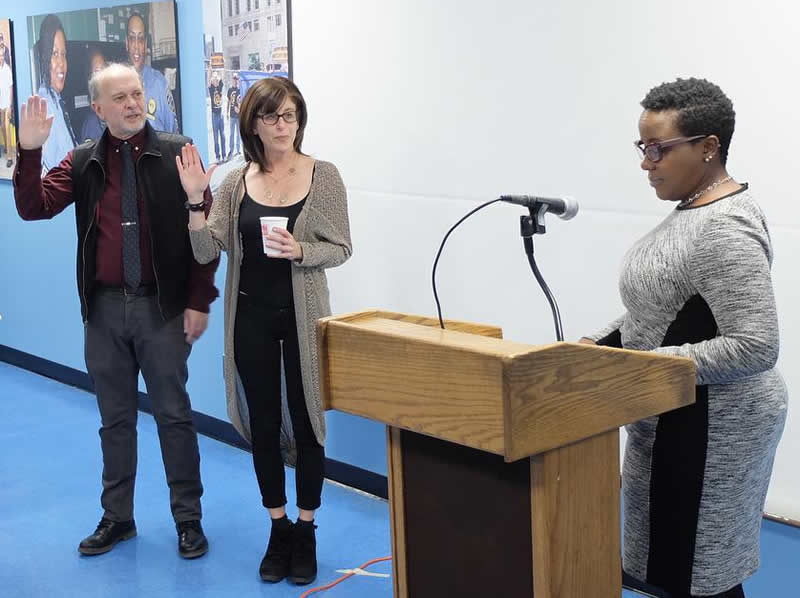 Bill Hayes and Caryl Paisner were recently sworn in as Local 802’s delegates to the NYC Central Labor Council.

We were recently elected as Local 802’s delegates to the New York City Central Labor Council, and while we were both happy to represent our union in the greater New York City labor community, neither of us really knew what to expect of the CLC. We have learned much since then – and have more to learn.

The CLC has monthly meetings, and we attended our first on Jan. 17. There is a call board where each union signs in to show which unions are represented that month. Right after Bill put Local 802 on the board, he handed the pen to another delegate who signed in for Actors’ Equity. We said hello, and before the meeting even began, the musicians’ and actors’ delegations were comparing notes. We started to see the potential value of cross-union communication. As the meeting officially began, we were called up, along with one other new delegate, to be sworn in.

The membership was then introduced to Scott Sommer, commissioner of the Federal Mediation and Conciliation Service. This is a federal agency that offers free services to labor organizations, which, miraculously, was not shuttered during the government shutdown. Mr. Sommer gave a thorough presentation on what the FMCS does. Of great interest to us was collective bargaining training that helps prepare a bargaining unit in advance of negotiations. Other services include collective bargaining mediation, grievance mediation and relationship development training, and education, outreach, and advocacy services. The FMCS has been around for 70 years and has a great track record in bringing labor and management together while avoiding work stoppages. We came away thinking this was an excellent service to be aware of. Mr. Sommer encouraged us to get in touch whenever the need arises.

Next, Vincent Alvarez, the president of the CLC, spoke about various labor issues, including the unionization of editors and writers at Slate, and the effect of the government shutdown on workers, in which he spoke about food bank support and other relief we might be able to offer those affected.

The CLC is the largest local labor organization affiliated with the AFL-CIO, with over 300 local unions taking part. By bringing together 1.3 million rank-and-file union members from every trade and occupation in New York City, the CLC advocates for the working people of our city with the input of workers from every industry in mind. The CLC has the resources to amplify a member union’s voice and media presence when necessary, such as when workers go out on strike or need support putting pressure on an employer to do the right thing. In addition to members coming together on a monthly basis at delegate meetings, communications and political staff from our unions meet regularly at the CLC to strategize and share resources and campaign updates. By coming together on a regular basis, union members in our city can speak with one unified voice on labor issues that affect all of us. For that and other reasons we have yet to learn, it is valuable for Local 802 to have a presence and a voice at the CLC.