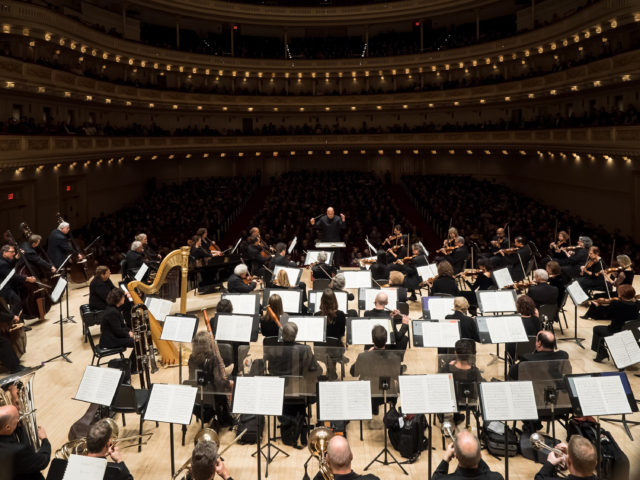 THE UNION ADVANTAGE: Musicians of the American Symphony Orchestra (above) enjoy the wages and benefits of a Local 802 union contract. Dozens of other ensembles in New York City have signed onto Local 802’s classical contract, which protects musicians and guarantees them union benefits. Photo by Matt Dine.

Four years ago, Allegro published an explainer of the Single Engagement Classical Concert contract. Since then, Local 802 has added just over 2,000 new members, many of whom may be working under that contract (Appendix A), or the Ballet/Opera Single Engagement contract (Appendix B). To help all members become familiar with the terms under which they work as well as to aid potential new bargaining units contemplating what working under a collective bargaining agreement means, a periodic refresher is in order.

The terms of Appendix A and B are nearly identical except where noted. Wages for concerts historically have been based on negotiations with the New York Pops. Those terms were promulgated last year and have been established through Sept. 11, 2023. Wages for Appendix B are based on the American Ballet Theatre negotiations. That contract expires on April 30 of this year and is in the process of being negotiated.

Other than the actual rates, there have been few changes to the language. Since most musicians work under a variety of different contracts, it is important to note that the provisions vary slightly from one field to another, and from one CBA to another. Each contract, however, covers the following items:

Premium pay/principal pay: A premium of 20 percent over gross scale wages for performances and rehearsals is required for principal players and section leaders. This premium also applies to musicians when they are the sole player in the section, e.g., harp, keyboard, and tuba. The concertmaster receives an additional 100 percent over scale. If an engagement does not call for a traditional concertmaster, another musician must be designated as the leader and receive the premium.

Doubling: A premium of 20 percent is paid for the first double and 10 percent for each additional double. There are some exclusions, such as A, Bb, and C clarinets and trumpets, and separate categories of percussion. If you have questions about whether a specific instrument should receive the doubling premium, it’s always best to check with the concert department.

Soundchecks: For a service to be considered a soundcheck, it must occur between 30 minutes and 1.5 hours before the performance and may be scheduled only in the event that no previous rehearsal for that performance has taken place at the site. Soundchecks are not abbreviated rehearsals and last for one hour including a 10-minute break. Soundchecks pay 1.5 times the hourly rehearsal rate.

Chamber music: Concerts requiring 14 or fewer musicians are considered chamber music and require a 12 percent premium for all players in addition to principal pay and doubling.

In the ballet/opera contract, the premium varies depending on the seating capacity of the performance venue.

Pension: Pension is calculated as a percentage of gross scale wages, which include performances, overtime, rehearsals, mileage, doubling, and all premiums. It is not deducted from wages but paid in addition to your wages by the employer. It is extremely important to keep track of all your engagements and to check your annual statement from the pension fund to make sure you receive the correct credit. Only employment covered by a union contract is eligible for pension benefits.

Due to the critical and declining status of the pension fund, the AFM-EPF has now instituted two mandatory rehabilitation plans. The plan added .09 percent to the base rate in 2010. The second rehab plan announced in June 2018 added 10 percent. This second amount is “unallocated,” which means the increase goes directly to the fund rather than to an individual musician’s account.

Health benefits: Health benefits, like pension, are also paid by the employer but the contribution is a set amount and equal for all musicians, irrespective of other premiums. It is important to note that most concert contracts, including ABT and the Mostly Mozart Festival Orchestra, offer a health benefits shortfall fund. If you are a rostered member of any Local 802 orchestra who participates in this benefit, funds are available to bring you up to Plan A or Plan B if your aggregate employer contributions fall short of the required amount of contributions (currently $500 per six months for Plan B and $2,000 per six months for Plan A). You may not use the shortfall fund to move from Plan A to Plan A+, however. Check your contract to find out if your orchestra offers this benefit.

Cartage: For a full list of instruments that receive cartage, please refer to the contract. For timpani, harp, and other bulky instruments, the actual cost of cartage is paid upon submitting receipts to the employer.

Mileage: Mileage must be paid for Nassau and Suffolk Counties and beyond Local 802’s jurisdiction even if transportation is provided.

Recording: No recording of any kind is allowed without prior written agreement. There are too many details related to recording and our national contracts to cover in this space, however I cannot stress enough how important it is that you educate yourself and know what you are getting into when you agree to do a recording. You easily could be cheating yourself out of thousands of dollars down the road if you agree to record nonunion. Archival and grant recordings are a different matter. They do not require extra payment; however, it is required that the employer sign an agreement with the union and the orchestra must vote to allow the recording to go forward. If you see microphones being set up in a rehearsal or performance and you have not received prior notification that a recording is taking place, inform your contractor and call the Local 802 electronic media department.

Service conditions: This clause addresses length of performances and rehearsals as well as breaks. Musicians must be paid for a minimum of 2.5 hours of rehearsal and for an entire concert even if some or all the group is needed for a shorter time. Rehearsals must end by 7 p.m. A rehearsal may be called for up to 4 hours before overtime is required, however all rehearsal times must be called no later than 24 hours before the rehearsal with a definite start and end time. No musician is required to remain beyond the last rehearsal call.

Work dues: For all work other than recording, 3.5 percent of your gross scale wages are withheld by your employer and submitted to Local 802. (Work dues for recording work vary depending on the contract). This should be the only deduction from your check other than statutory taxes. If no taxes were deducted from your check, you were paid as an independent contractor, which is against the law in New York state (for musicians). Allegro has published many articles on the right of musicians to be treated as employees; we have a special page set up at www.bitly.com/independent-contractor-articles. If you’re paid as an independent contractor, it could come back to haunt you at tax time. Learn about your rights!

Whether you are new to 802 agreements or just haven’t reviewed them for a while, I hope this will inspire you to read your contracts and contact your orchestra committee or the Local 802 concert department when further elaboration is needed. You can access our classical scales at www.Local802afm.org/contracts. Better yet, stop in and pick up a copy. We are always happy to see you. 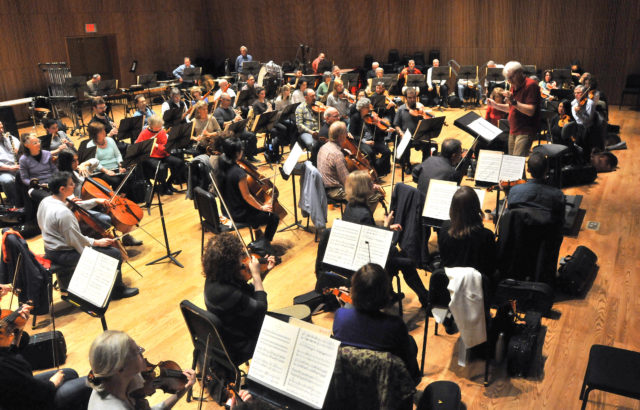 Musicians who perform with the American Ballet Theatre are protected under a
Local 802 union contract. Pictured above: ABT musicians rehearsing in 2016. Photo by Walter Karling.