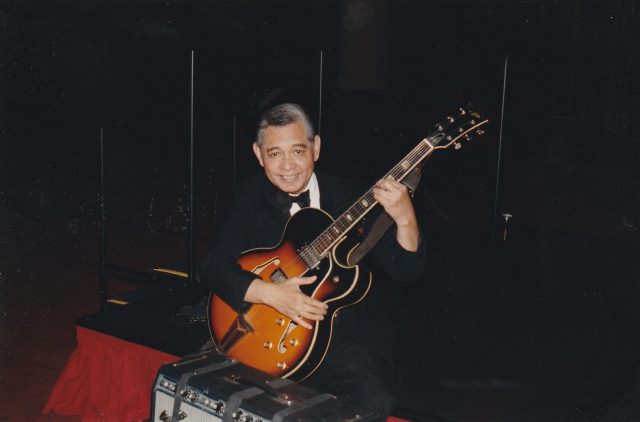 A pioneer of jazz in his native Indonesia, Mr. Pattirane inspired subsequent generations of musicians to follow in his footsteps. His primary instruments were guitar, piano and vibraphone, but he also played violin, Hawaiian steel guitar, bass and drums, and always seemed able to teach himself any instrument to a professional level.

Mr. Pattirane came to the U.S. in 1964 to perform at the New York World’s Fair. While here, he moonlighted at the famous Hawaii Kai restaurant on Broadway, where he played Hawaiian and jazz guitar. He decided to make a career in NYC, where his virtuosity and versatility enabled him to work with Les Paul, Jimmy Smith, Zoot Sims, Herbie Mann, George Benson, Monty Alexander, Reggie Workman and many others.

In 1969, Mr. Pattirane appeared with his band in the film “Stiletto.” In the 1970s, he played in the bands of Frank Sinatra, Bob Hope and Benny Goodman, and in the 1980s he played with Cissy Houston and Bette Midler. He was the singer and principal guitarist with the Lester Lanin Orchestra for the reception of the 1981 British royal wedding, and he also performed in the inaugurations of Jimmy Carter, Ronald Reagan and Bill Clinton with the Meyer Davis Orchestra. He played at Tony Awards reception parties for 25 years, and continued to perform professionally until 2012.

He is survived by his daughter, Naomi.