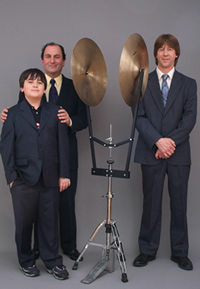 Since I joined Local 802 in 1971, I have worn many hats: percussionist, drummer, keyboardist, conductor, copyist, orchestrator and educator. But 10 years ago an unexpected one came up: inventor. Well, co-inventor actually. In 2008, my two partners and I were awarded U.S. Patent #7,329,810-B2 for a “crash cymbal apparatus,” which we call CYMBAL GUY.

I say unexpected because I don’t consider myself particularly handy. Putting up a shelf takes me a month. But I had a saw and a drill and a dream.

It happened because of a Broadway show. In 2003 the Rodgers and Hammerstein musical “Flower Drum Song” was being revived. Playwright David Henry Hwang (“M. Butterfly,” “Aida,” “Tarzan”) was brought in to doctor the book. At the time his son Noah was seven years old and wanted to take drum lessons.

So David went down to the pit and talked to the show’s drummer, Ray Grappone. Ray told him to call me because “Larry’s good with kids.”

At the time I had a one-bedroom apartment on West 51st Street that I used as a music studio (“The Hovel”). When David called me, we scheduled a time to meet. I said “Tell Noah it’s not a lesson; he’s just coming over to play with my stuff and if we hit it off, we’ll schedule a lesson.” 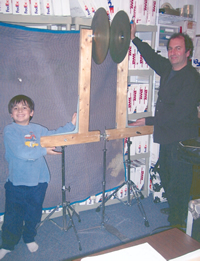 CYMBAL GUY in its forst incarnation.

When Noah came over, the thing he liked most was a toy clown about the size of a can opener that crashed cymbals when it was squeezed. “Wouldn’t it be great to build a giant one?” he asked.

I answered, “If you want to study with me we can do that.”

Two weeks later Noah came over for his first lesson. “Well,” I asked, “what should we start with: xylophone, bongos or snare drum?”

I had forgotten all about it. So I examined the toy clown and figured out that we needed something big with a spring. A light bulb lit up in my head: a hi-hat!

Thinking we might have come up with a new invention, I went to a bookstore and asked if they had something like “Inventing for Dummies.” The clerk checked his computer. “Yes,” he said. “We have ‘Inventing for Dummies’ in the business start-up section.” The book was a great resource. I learned that the US Patent and Trademark Office has a website where you can do your own search for free. So I spent several afternoons checking devices for pairs of cymbals. It looked like there was nothing close to CYMBAL GUY. I did learn that the specific category for this type of instrument is based on the way the cymbals are mounted: “a rigid vibrator.” You can’t make this stuff up! 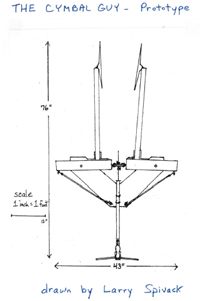 CYMBAL GUY evolves: in this prototype drawing, the instrument is now mounted on a hi-hat

It is fairly inexpensive to start the patent process. For $100 you can file a “provisional patent.” This is really just registering your drawings and descriptions at a certain date. Then you have a year to either apply for a full patent or not. During that year you can show your idea to manufacturers knowing that your paperwork is on file.

By this time Noah and I had refined our design so that our wooden prototype could be mounted on any hi-hat. I made up diagrams using skills I had learned as a music copyist.

My mother reminded me that my cousin was a patent attorney in Washington, D.C. I called him and he got really excited. Almost all of his work was in computer or pharmaceutical patents, so for him this was like being in show business. He helped me file the provisional patent using my diagrams in 2004.

Many percussionists came to my studio to see CYMBAL GUY. Several wrote statements as witnesses in my Inventor’s Journal and made suggestions. Bob Ayers, who at that time had an instrument rental company, suggested that I contact his son Glen, who had become an expert at constructing racks and stands made out of steel. As Bob put it, “While you were in high school band, Glen was in metal shop.” 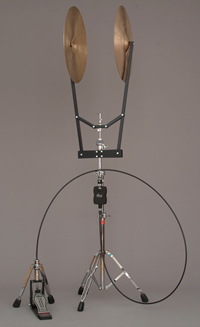 After several tries, Glen came up with a prototype that could be assembled from nine pieces of steel and nuts and bolts. It was such an improvement that Noah and I decided to include Glen as a co-inventor. In 2005 we applied for a full patent and received it in February 2008, a few days before Noah’s 12th birthday. Glen made eight CYMBAL GUYS by cutting and drilling them individually, and we began to sell them. I in essence became the manufacturer, and learned a little about the business. Like: how many pieces that are 2 inches by 1 foot can you cut from a piece that is 2 inches by 12 feet? The answer is 11, because each time you make a cut you lose 1/16 of an inch. How do you avoid waste? Make the pieces 2 inches by 11 15/16 inches.

A friend who had moved to Bend, Oregon found a metal shop there that could produce the steel pieces by cutting and drilling them with lasers. Not only were they exact to our specifications, but we were able to get rounded edges. So they made 20, of which we have sold 18.

We had a moment of glory in 2012, when the revival of “Porgy and Bess” became the first Broadway show to use CYMBAL GUY. A remote hi-hat pedal produced by Drum Workshop came in handy (see photo 4), because the pedal was able to be placed 10 feet away from the cymbals, which played fortissimo crashes in their own sound-proof booth. Charlie Descarfino, percussionist for the show, told me “It’s a one-trick pony. But when you want that trick it works great.” Charlie also said that many musicians in the audience came down to the pit to ask how many percussionists there were (answer: one!). The device was played for nine months without a single problem. Later that year CYMBAL GUY was also used for “Nice Work If You Can Get It.” I couldn’t walk past 46th Street without kvelling.

And now (fanfare) we introduce COWBELL DUDE. I was keeping it a secret, hoping that “Saturday Night Live” would use it in a sequel to their famous cowbell sketch (95 percent of people reference that sketch when they hear the word “cowbell”). But it looks like that’s not going to happen. So far this device has not been played in public or recorded. Who will be the first musician to play COWBELL DUDE?

Larry Spivack, a Local 802 member since 1971, is a percussionist who has played in 42 Broadway shows and the Metropolitan Opera. Visit www.cymbalguy.com to learn more about both instruments.