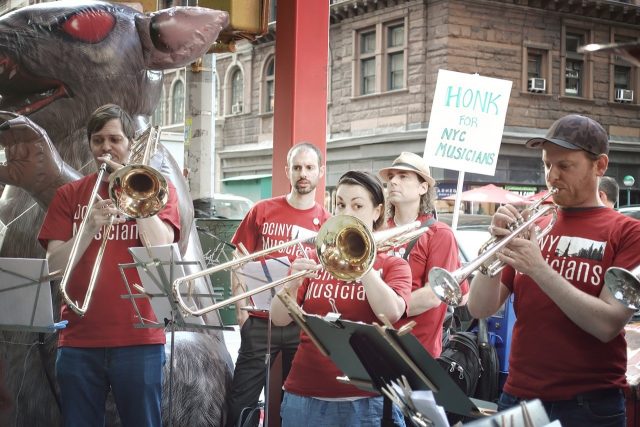 The orchestra of DCINY took to the streets in front of Carnegie Hall in early June in a joyful musical rally to demand a fair contract. The rally was covered by Labor Press and made an impact on the public, on the employer and on the musicians themselves. Below are the words of some of the DCINY musicians who attended.

“It felt so great to play with my colleagues again and see other union members show up to support us. I also truly felt that the audience and chorus members who learned about what we are going through felt for us. It didn’t look like they approved of the choice management made to replace us.”

“It was so encouraging to see such a large show of support for our orchestra!  The musicians of NYC,  people on the street, concert-goers, and even NYC bus drivers joined us in our fight for a fair contract.”

“It was an amazing feeling to see New York City musicians come together in solidarity to support the fair treatment of our colleagues with the Distinguished Concerts Orchestra. While we are effectively locked-out by DCINY, this only strengthens our resolve and commitment to stand by our musicians who are consummate professionals who deserve respect, dignity, and job security.” 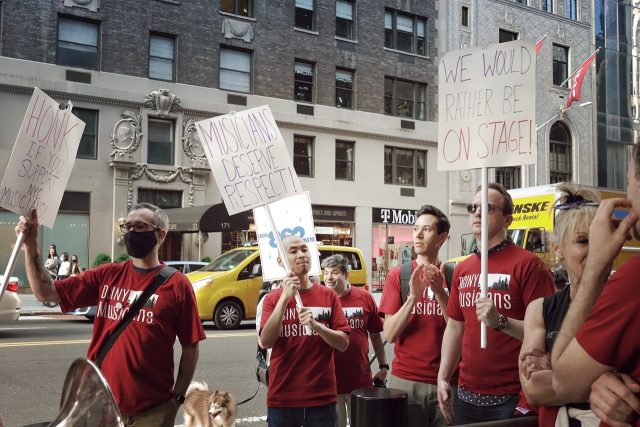 “It was an honor to be included in the protest brass band in front of Carnegie Hall last week. It really helped me remember the reason we are engaged in this long-term labor battle. Playing music is what I care about most and I feel that all of us deserve a basic, simple union contract to do what we’ve set out in our lives to do. It was really sad to find out those high school kids were tricked into replacing the orchestra by thinking they had been chosen somehow based on merit. That makes me really question even more DCINY and erodes any trust I have going forward that they are playing with any sense of fairness.”

“It was exhilarating to be there with everyone and hear the live band, they were spectacular. It made me miss the DCI orchestra even more. I was so proud to be part of a legit rally/protest, complete with Rat! And, seeing the reactions of many patrons- they seemed surprised by us, some of them, and I could see enlightenment cross their faces when we explained. I hope they experienced a distinct and profound absence, of a full orchestra, during the performance. This felt like a good chink inflicted on this management-created wall.”

“It was so refreshing and uplifting to be together with so many Local 802 members from different bargaining units (MET Orchestra, Met Associate Musicians, Broadway, NYC Ballet Orchestra) and our Local 802 administration in support of DCINY Orchestra Musicians negotiating a fair first contract.  This is the first successful new 802 organizing campaign in as long as I can remember and in order for us to achieve our goal of fair wages, benefit contributions and reasonable working conditions, all 802 members need to participate and show the management of  DCINY that NYC musicians stand together.  The success of the DCINY Orchestra and the upholding of area standards depends on it.  I hope to see even more bargaining units represented at the next rally, if it comes to that!”

“First of all, it was great to see faces that I haven’t seen since before the pandemic!  The strong turnout and performances (thank you!) made me feel that we were sending a unified and upbeat message to the patrons of the concert and community that we were willing and ready to perform, but have been locked out by DCINY.” 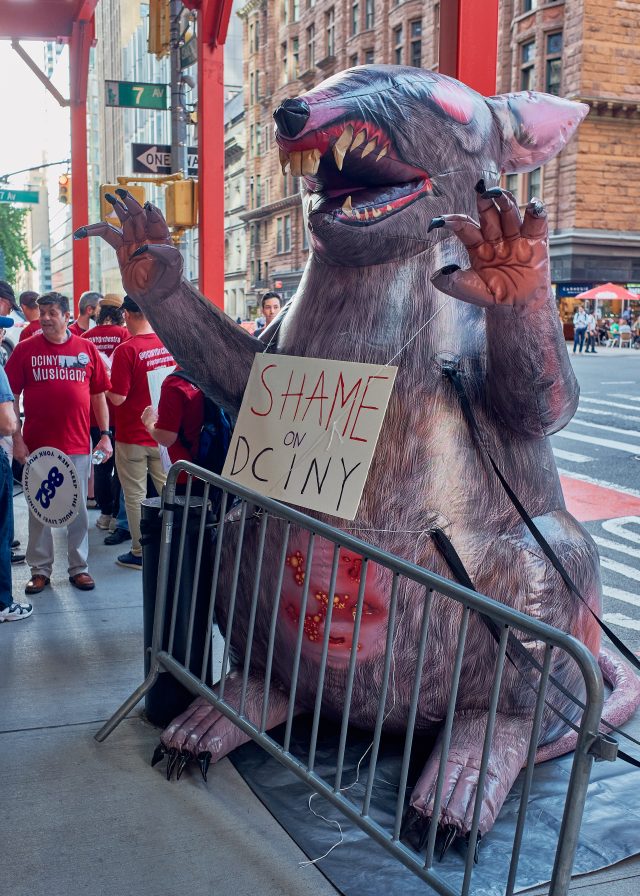 “The rally was a great success. I had not expected to have feelings of joy and satisfaction from such an event, but seeing our colleagues and friends come together in solidarity, the music and the air of positivity, that certainly contributed to the positive vibes. I have great hope that if we maintain such good tone, our efforts will eventually succeed.”

“Musicians have the same needs as everyone else, including fair wages, access to quality health insurance, and a way to fund retirement. It was great to join colleagues and friends at the rally as we stood up for our needs.”

“The protest was a very empowering chance to make our voices heard, and to share with audiences our frustrating experience trying to negotiate with dciny. The brass players sounded like consummate professionals- and the audience got a taste of the deep level of musicianship that could have been part of that concert. It was also very joyful to reconnect with friends from the orchestra after so many months (years!) apart.”