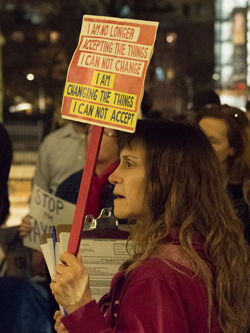 Like millions of other American workers, I am horrified by the tax law passed by the Republicans and I hope we can elect a Democratic congress this year. The Democratic Party must fight more effectively against the new tax law. Of the many issues to discuss during the 2018 congressional election campaign, the Republicans will promote the tax law as their major accomplishment. Lack of strong opposition by Democrats could lead to another Republican majority in Congress.

Republicans are depending on the fact that American workers in all fields will see increases in pay as of this month, and that the negative impacts of the tax law will be delayed until after the midterm election. It is crucial for Democrats to start now with a broadly-based critique of the law, to advertise and to repeat constantly in social media and TV commercials the many harmful aspects of the law. It’s not sufficient to emphasize only that the wealthiest people and corporations will benefit most from the law. Democrats must be specific about the disastrous consequences for the American people who will pay for those tax decreases.

The following costs to the American people will result from this tax law as they offset drastically the small increases in earnings for the working and middle class:

The Democratic Party should immediately begin its fight against the tax law repeating these issues in all the media. The party will likely lose the midterm elections this year if it waits to launch this campaign until just before the election.