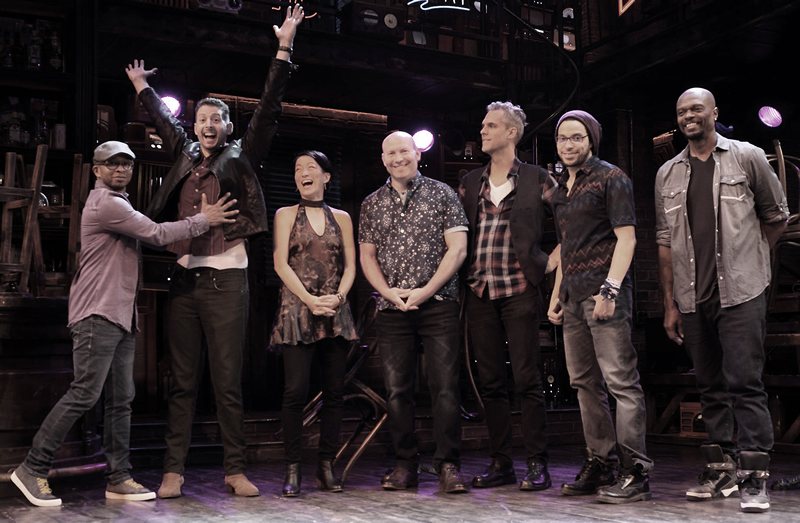 Smokey Joe’s Café has returned to the stage, this time as an Off Broadway show at Stage 42. The jukebox musical celebrates the songs by Jerry Leiber and Mike Stoller that are embedded in our common American culture. The show contains one of the most diverse casts and bands in theater today, and their eye-popping, jaw-dropping talent brings these songs to life in a seriously fresh way. The excellent musicians, covered by a Local 802 contract, emerge at times from their alcove, becoming part of the show’s setting. This engagement provides an interaction seldom experienced in musical theater and it truly humanizes the soul of the show. I recently had the chance to talk to the musicians, who shared with me what it’s like to play on stage while engaging with the cast, and their thoughts about the diversity found in the show.

Marlena Fitzpatrick-García: What’s it like playing an instrument and being part of the on-stage setting?

Yuka Tadano: It requires some acting – like spinning my bass! I’m trying to connect with whoever’s on the stage with me, but other than that, I play like I usually do on my other gigs. But I’m loving it. Since I’m playing bass while facing the cast and the audience, I have the best seat in the house! All the actors have such a great energy and it definitely feeds us. Performing on stage has been one of my favorite things to do since I was eight years old. I used to act and sing, so having a presence on stage feels very natural. Trying to find a connection with the audience is very important every time I make it to the stage.

Douglas Derryberry: The intensity that the cast brings to each number is so inspiring that it makes you want to be a part of it when you are out on stage with them. I memorized the charts of the tunes we do on stage, so I can just watch the cast, and watch the audience enjoy the show. And I enjoy being a part of it too!

Eric Brown: Fortunately, I’ve never had the experience of being in a musical theatre pit that’s under the stage or obscured. My background is being on stage. This is the ideal situation for any musician. It’s 90 minutes of pure music and you get to interact with the cast.

William Barnes: I’m inspired by the actors. The vibe coming off their faces – the energy – telegraphs all the way to the back of the house. I take my cue from them. I memorized the charts we’re going to play while we’re on stage, so I can watch them, be inspired by them and try to jack the show up even more with them. How many shows have a stage that rolls out?

Matt Oestreicher: The cast responds to our energy. They don’t care what little things we’re doing or what fancy notes we’re playing. It made me realize that we just have to have energy out there. I love being part of that.

Marlena Fitzpatrick-Garcia: Tell me about the different styles in this show and how you fit in. What are the challenges?

Yuka Tadano: Knowing the style. Playing the right stuff with the right feel and sound. For example, the song “Ruby Baby” has a blues form and all I have on my part is slashes with chords. This means I can improvise the bassline, but if I play the bassline like a jazz blues, it won’t fit. Or take the intro bassline for “Stand By Me,” which I was told that Mike Stoller himself wrote. It is so iconic that you have to play it like the original. The pressure is on!

Brandon Wright: The saxophone was a very prominent voice in this style of music, so I was thrilled to dig in and try to sound as authentic as possible. The challenge is to pay homage to great saxophonists who played on the recordings, yet still sound like me. It requires a lot of intensity and energy to play this way. I always have iced coffee and Gatorade backstage to make it through the finish line.

Marlena Fitzpatrick-García: This is a very diverse band and cast. Let’s discuss diversity in the pit. What makes your show stand out from the rest of the shows in Off Broadway and Broadway, in terms of diversity? What more could be done to foster diversity and inclusion?

Yuka Tadano: The idea of how diverse we are didn’t really hit me until you brought it up. I don’t know too much about other shows, but I understand that there are more and more shows that feature all-female bands, for example. Personally, I’m not really a fan of an “all-female band” situation, to be honest – or “all anything,” when inclusion becomes exclusion. I’ve played many gigs like that, but I always end up asking myself, “Did I get called for this gig because I’m a female?” I guess I would be considered a minority, since I’m a Japanese female, but I usually don’t think about that. I am just a bass player. Period. I may sound like an idealist, but I believe if I do my part and am always ready to play in any musical situation, the opportunity will come. Even though everyone has completely different backgrounds, this band has great chemistry on and off stage and it’s been a blast. Since musicians are usually not involved in the hiring process, all we can do is just to play as well as we can as a band and have fun with whoever is in the pit – like we do every show.

Brandon Wright: Our show is not only diverse by the various ethnicities represented, but also by the age range and experience that every musician brings. Some of us studied music in college, others got their schooling on the road. I think I may be the only single guy in the band. Everyone else is married, and some have families. Personally, I’ve always felt music has been a welcoming place to foster diversity. If you can play, be professional, and are fun to be around, you’re in the club. If you have a desire and passion to play a certain style of music, you’ll find like-minded people. Word of mouth is your best ally.

Douglas Derryberry: It is definitely a problem that the Broadway and Off Broadway orchestras are predominantly a white male group. We all need to do some thinking and some work to try and push our little community to more closely resemble the demographics of the wider city. It is hard though. Here’s an anecdote that illustrates this problem. I had the great fortune to be guitarist for the multi-Tony winning show “Fun Home.” The show had a female protagonist, female composer and a female book writer. All in all, it was such a high amount of inspiring female energy that it occurred to me that I really should try and find at least one female sub. The trouble is, I only knew one professional female guitar player and she was on the road. During the course of playing the show, I was cold-called by over 50 people asking if they could sub for me. They were all white males. Finally, one woman cold-called me about it…and I was thrilled! I checked out her website, samples of her playing, and her compositions, and she was totally legit. So I wrote her back, and recruited her enthusiastically. She came and watched, but ultimately opted to not sub at the show. So I tried! But it’s hard. I think all of us are, in some degree, stuck in the worlds that we are from and that we know, but for the sake of us all, we should try and reach out and reach across. It makes it more fun and more human to have a broader range of folks in a band or orchestra.

Eric Brown: My experience has been on the road and on tour. Those bands have been predominantly black and brown people. This band and this cast are very diverse, probably one of the most diverse casts and bands that I’ve seen on Broadway. It’s not something you see a lot of, as far as black and brown people in the pit. It’s a good thing. To foster more diversity, I’d say two things. Contractors and the powers that be should become more familiar with other cats and know that there are more musicians out there. We as musicians, once we have these gigs, should try to incorporate other musicians as subs. That way they get a chance as well.

Matt Oestreicher: It takes thinking on the part of the people who are hiring to bring in people who will do something different. To know that the world is changing and we need to break up the stagnancy and bring in communities to have a voice. So there’s definitely a conscious attempt to do that.

William Barnes: When it comes to diversity in music, music is the common ground. We all bring that to this Off Broadway musical. Diversity also comes in our style. The music seems to override everything, ultimately. Whether you learned with formal training or like me, playing by ear, diversity is part of it too.