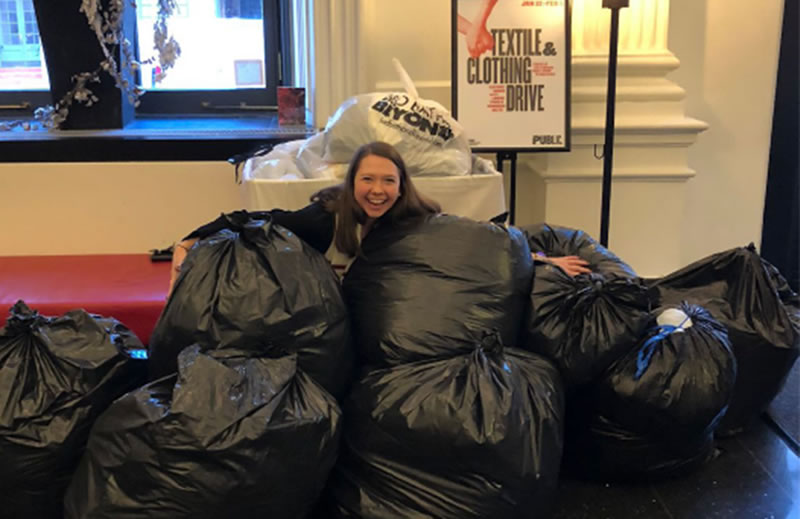 Hannah McCue, member of the operations team at the Public Theatre and dedicated Off Broadway Green Captain, with the collections from a two-week textile drive.

Earth Day is held every year on April 22 and it is the largest civic-focused day of action in the world. On this day, individuals, communities and politicians come together to fight to reduce our global environmental impact. Since the first Earth Day on April 22, 1970, concerned citizens have been able to restore forests, educate youth, and even pass laws to protect our planet. So the answer to the common question of “Can one person even make a difference?” is a resounding yes.

One of the main principles behind everything that we do at the Broadway Green Alliance is that small actions add up to make large and impactful changes. Progress comes from millions of us doing a bit better each and every day – whether it’s changing 100,000 marquee lights on Broadway to dramatically reduce carbon emissions or making sure to recycle that one old Playbill instead of throwing it in the trash.

The BGA is an industry-wide initiative that educates, motivates and inspires the entire theatre community and its patrons to adopt environmentally friendlier practices. We launched in 2008 as an ad hoc committee of the Broadway League and have become a fiscal program of Broadway Cares/Equity Fights AIDS. We bring together unions (including Local 802), producers, theatres, college drama programs and related theatre businesses. Working closely with the Natural Resources Defense Council, we identify and disseminate better practices for theatre professionals and reach out to theatre fans throughout the county and all over the world.

One of the ways that we achieve our mission is through our most popular initiative, the Green Captain program. We seek to find a volunteer BGA liaison at each and every Broadway show and Off Broadway venue, as well as at colleges across the country. We then provide to our volunteers a Green Captain kit, which contains information on how to help their production or theatre become greener.

On Broadway, we currently have 32 Green Captains, all of whom are incredibly dedicated to making both large and small changes within their productions.

Megan Ort, our Green Captain at “Cats,” wanted to make sure that everything was disposed of as responsibly as possible when the show closed in December. She went out of her way to sort through clothing, old makeup, dance shoes and any other items that were left backstage or in dressing rooms. We were able to recycle or reuse almost all of these items and Megan was able to reduce the show’s overall environmental impact.

Our Off Broadway theatres are no different and are just as passionate and active as our Broadway shows. Helen Bennett, Hannah McCue and Mariana Ortiz are our Green Captains at the Public Theatre. They were inspired by the BGA’s textile drives and they decided to host their own. For two weeks, they collected clothing, shoes, fabric and other textiles to donate to Wearable Collections, a company focused on keeping these items out of landfills. Together, they were able to keep over a dozen bags full of textiles from being thrown out.

There are also amazing steps being taken around the country in our College Green Captain Program. Students are learning from one another, and from our Broadway and Off Broadway Green Captains, and are incorporating sustainability into every aspect of theatre. Each year, we run a contest to reward these college students for their greening efforts on their college productions. In 2017, the winner was Olivia Ranseen from Indiana University Bloomington. She worked tirelessly with her professor, Paul Brunner, to switch to rechargeable batteries, upgrade to LED lighting, recycle materials, and employ more sustainable materials for sets. She was able to make an impact by combining various actions, both large and small, and is inspiring other students to do the same.

These are just some of the many amazing and inspiring actions that enthusiastic individuals have taken to create environmental change. All of our Green Captains, whether they are on Broadway, Off Broadway, at colleges, or on tour, embody the spirit of both the Broadway Green Alliance and Earth Day. They demonstrate that one person can make a massive difference in the world.

Marisa Friedman is the Local 802 Green Captain and can assist with any questions. Or if you are interested in becoming a Green Captain on your show, at your theatre, or in your union, please e-mail us at green@broadway.org or sign up to become a BGA member at membership.broadwaygreen.com.