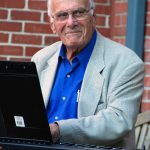 Pianist, conductor and arranger Donn Trenner died on May 16, 2020 after being a member of Local 802 since 1956. Fellow member Stuart Tresser wrote the following reminiscences: