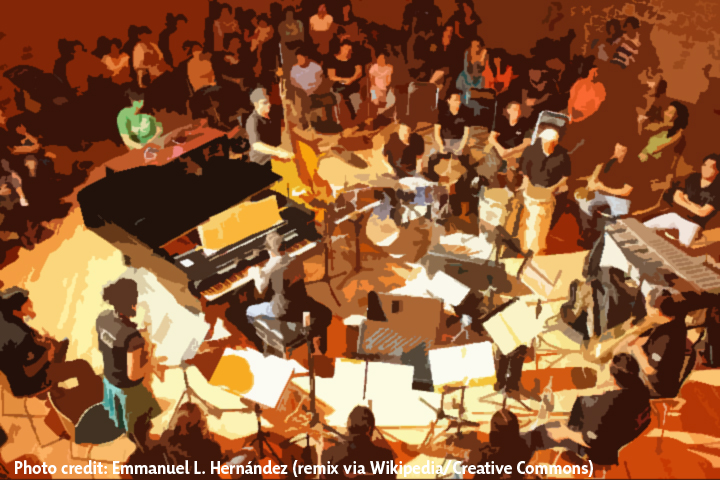 (This article reprinted with permission of Variety Media, LLC)

The Film Musicians Secondary Markets Fund, which collects and distributes residuals to union musicians who play on film and TV shows, will mark its 50th anniversary in 2022.

It’s become a financial lifeline for many musicians, from helping them to achieve financial security to being a primary income source during their retirement years.

Every July 1, the FMSMF sends checks to nearly 17,000 working and retired musicians, and the beneficiaries of those who’ve passed away. According to executive director Kim Roberts Hedgpeth, this money constitutes about 1 percent of the so-called “producers’ gross receipts” from the sale of a film or TV show into a “secondary market”: free TV, cable TV, streaming services, home video or other venues. (Musicians are not entitled to share in profits from the original box office take.)

This all started around 1960 when producers wanted to sell their movies to TV but faced opposition from actors, writers, directors and craftspeople who asked to be repaid when their work appeared in another medium.

Producers came up with this concept — a small percentage of the profits from licensing the work — and it has become standard practice in the industry since that time. The FMSMF functions as a middleman between the American Federation of Musicians (the union representing professional players) and the various studios, networks and independent producers who are signatories to AFM agreements calling for these payments.

“We are a nonprofit payroll house that acts like a multi-employer pension plan,” Hedgpeth explains. “We’re a one-stop shop. If you are a musician who did a score at Sony one day, at Fox another day and at Warner Bros. another day, and your [initial] checks might be coming from all kinds of different places, when it comes to residuals, you only need to look for one check from us.” The amounts range from a few hundred dollars to — in some cases, in which older musicians have worked on many popular films — sums running into the hundreds of thousands.

The fund has seen an ever-growing allotment of money owed to the musicians. Back in 1988, it distributed about $10 million. By 2000, the figure had grown to $43 million and in 2019, it broke the $100 million mark. This year the amount was nearly $109 million (based on total collections from the producers of $124 million).

“There is no question that the growth in residuals is primarily driven by streaming,” Hedgpeth points out.

About 40 percent of the money currently being collected represent streaming options, suggesting “more product is being moved into secondary markets to a greater extent than in prior years.” And that money is key for a professional player to survive in today’s marketplace, says Recording Musicians Association international president Marc Sazer. “When you’re first starting out, it’s an important enticement to a solid career,” he says. “Once you’ve developed a career, it’s absolutely essential to be able to raise a family, have a home and lead a middle-class life. And for thousands of retired musicians, it’s a fundamental part of their retirement.”

Last year, in the midst of the pandemic when no one was working, Sazer adds, “the fund did something unprecedented and, frankly, heroic. They distributed that year’s residuals checks months early, and it literally saved people’s lives.” As Hedgpeth explains: “Musicians suddenly woke up one day and all their jobs were gone. We were the only place that could provide some income to musicians who were just stranded when the industry shut down in March [2020].”

The FMSMF staff scrambled and, because they could actually still work in their Encino, California, offices (having been declared “critical infrastructure” for the business, just as SAG-AFTRA was), managed to issue checks on May 22 ahead of the traditional July 1 date.

Oboist Lara Wickes remembers getting her first FMSMF check in 2010. She was struggling to make a living as a professional musician, juggling recording dates, live performances and teaching. But she had played on the score for James Cameron’s blockbuster “Avatar,” and its sale to cable, DVD and other markets resulted in a $3,000 check, which was “huge” at the time, she recalls.

This money “makes our community better, more comfortable and more able to focus on music-making rather than just survival,” Wickes says. “It feels like I’ve made a much more meaningful contribution if I’m being compensated in a way that’s parallel to the actors and writers and so forth.”

Music plays a major role in the artistic triumph or failure of any visual-media project, so for the musicians to share in any financial success is well deserved, execs say. (Imagine, for example, Titanic minus James Horner’s Oscar-winning score, or Jaws without John Willliams’ now-iconic shark theme, both recorded with L.A. union players.)

Adds Wickes, “Everybody in the room, on any recording project, has spent tens of thousands of hours perfecting their craft in order to even be considered [for a recording session].

“The best orchestras in the world are also the best-paid orchestras and that’s not a coincidence,” she notes. “A freelancer who does this work can make a salary that’s on par with a topnotch orchestra. And we’ve got to keep the standards as high as we can.” Hedgpeth is constantly stressing to producers that “residuals payable to this fund won’t break the bank. It’s a small percentage. If the film doesn’t do well, the percentage is probably negligible. And if you’re paying $1 million in residuals, that means you’ve already made $100 million.” 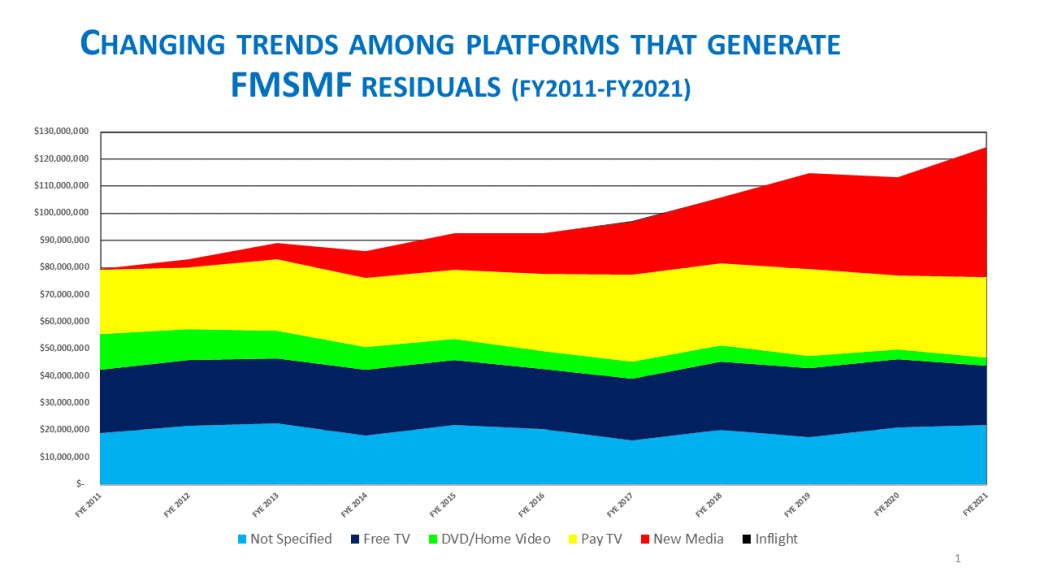 Every year, the Film Musicians Secondary Markets Fund pays thousands of musicians for their movie and TV work when it appears on cable, free TV, streaming services, or home video.

But not every musician is aware of this benefit when they begin their recording career, and many who have left the business are still owed money — sometimes, a lot of money, FMSMF officials say.

The fund website (fmsmf.org) lists thousands of musicians (and in some cases their beneficiaries) who are owed, in all, several million dollars in residuals for movies and TV shows but have somehow dropped out of the system.

Even FMSMF executive director Kim Roberts Hedgpeth discovered, to her surprise, that she was on the list.

“My dad was a musician in New York. It turned out my father had done one or two small things that generated teeny-tiny residuals, and I was his beneficiary. So there was enough money for me to buy a couple of lattes,” she says with a laugh.

Some of her 40-plus employees spend part of their workday playing detective, tracking down musicians that are not in their system. Participant services generalist Rachel Arno recalled looking for one particular musician several years ago. He had played on a handful of films (two of which received multiple Oscar nominations) but was no longer in the Los Angeles area.

Using internet search engines, she eventually managed to locate him: He was working at a piano bar in northern California and — after she managed to convince his skeptical boss that this was no scam, that she really wanted to give him money — she was able to send him a check for $158,000.

In fact, an estimated 800 to 1,000 musicians are added to the FMSMF rolls each year, says Hedgpeth: “We call them ‘new musicians’ because they are being reported to us for the first time. But they might have been members of the union for 10 years or more; this was the first time they were on something that generated a residual.”

Improvements in technology have helped FMSMF personnel find these “lost” musicians, and social media has been a surprising plus in tracking them down, says Chris Kuhrt, director of participant services operations. Locating musicians who played on songs that wind up in movies or TV are some of their biggest challenges, he notes.

Hedgpeth would like to dispel an enduring myth that “only 50 guys are getting residuals,” and that they’re all staggering sums. “For the first couple of years, it’s modest,” Christopher Anderson-Bazzoli, president of the Recording Musicians Association concedes. “But year after year, you realize this is a special thing to have.”

The fund was known as the Theatrical Motion Picture and Television Producers Special Payments Fund until 2001-02, and many musicians still refer to their annual check as “special payments.” But there is actually a separate unit, the Sound Recording Special Payments Fund, that applies more specifically to musicians who play on records rather than in films.

Existential Threats: Streaming’s Impact on Residuals Is a Concern for Fund and Union Execs

What does the future hold for the Film Musicians Secondary Markets Fund? As with so many aspects of a rapidly changing media business, it’s hard to predict.

When union musicians struck the networks and studios in 1980, the hope was to gain residual payments for reruns of network TV series, something that had been overlooked in earlier negotiations with producers, dating back to the 1960s. But they failed, and have never been able to achieve that goal in any contract talks since.

Streaming services that produce their own series are very often a “dead end” in terms of residuals, because shows that air exclusively on Netflix, Hulu, Disney Plus, or other services — and don’t pass on to a secondary market like DVD or Blu-ray — will not generate later payments for union musicians who played on those scores.

What’s more, a growing number of producers are not hiring union musicians in order to avoid any kind of future payments.

The Film Musicians Secondary Markets Fund is not part of the collective bargaining process. Those contracts are negotiated between the American Federation of Musicians and the Alliance of Motion Picture and Television Producers. The FMSMF collects and distributes residuals based on those terms, and you must have worked on an AFM contract to benefit.

“For musicians, the shift in the industry to these new made-for streaming platforms is something that will have a profound effect on their futures and something that they will have to be thinking through and paying attention to in the years ahead,” says Kim Roberts Hedgpeth, FMSMF executive director.

Recording Musicians Association (RMA) President Marc Sazer believes “the big issue facing us, going forward, is the new world of streaming, and the streaming economy. Once [a program] goes to a streaming service, it never comes back out to free television or pay TV or cable TV or, rarely, DVDs. The whole world of secondary markets is broken when this market swallows everything up. That’s an existential threat for us that we have to figure out.”

Adds Christopher Anderson-Bazzoli, president of the Los Angeles RMA: “I’ve been able to make a career because of the Secondary Markets Fund. We’re in such a huge transition now, to watch that be undermined in this transition to streaming, would be a tragedy. “I want to make sure that the next generation [of musicians] has the ability to take their talents and make a solid career here in L.A., and not live hand-to-mouth. To me, that’s the most important point.”