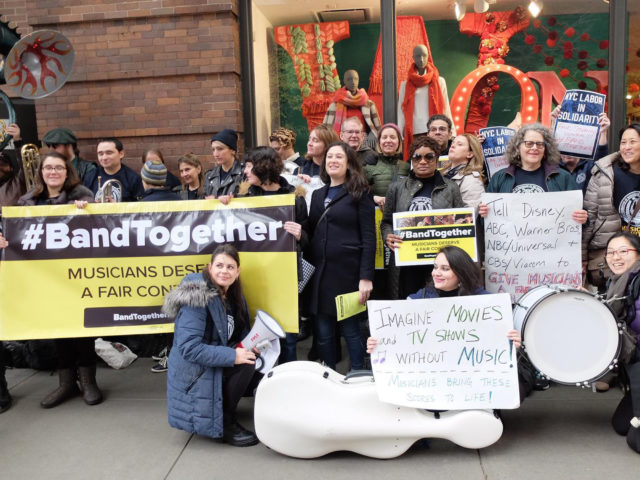 We have just come off of the long, drawn-out negotiation between the AFM and the Alliance of Motion Picture and Television Producers. At the time of writing this article, a tentative agreement has been reached subject to ratification. The negotiation began in 2018, included two extensions, and finally concluded on Nov. 21, 2019. We both attended the last two days of bargaining in L.A., and additionally participated in a National Coordinating Committee of Player Representatives and Bargaining Unit members from across the country, helping to establish New York’s involvement in our national contract negotiations.

It is important to note that we did not win streaming residuals. However, we achieved substantial gains made possible because of the solidarity between rank-and-file musicians across the country and the collaboration with AFM leadership. We realized in order for musicians to have a chance at the hard-fought streaming residuals that writers, actors and directors enjoy, we needed to organize and mount an extensive campaign to build leverage by involving musicians who play on these contracts. Some of the most economically significant proposals came directly from suggestions by musicians who work regularly under the Film/TV contract.

The #BandTogether campaign began in the summer of 2019 when musicians in LA delivered a petition, signed by musicians across the country, to the AMPTP. Led by the AFM international organizing staff, #BandTogether assembled a dedicated group of musicians in LA, Nashville, and New York to lead actions, hold rallies, and assemble artist/legislative support, putting pressure on the multi-billion dollar companies at the bargaining table. Each city formed a Contract Action Team and elected members to serve on the National Coordinating Committee. In a few short months we built enough power to shift the discordant landscape with the Film/TV producers and garner real contractual gains. With a sustained effort, the ultimate goal of winning streaming residuals is now in sight.

We built up so much pressure that on the last day of negotiations the lead lawyer for the AMPTP said she hopes for “labor peace” for the duration of the new contract. The influence all of the organizing and rallies had on the producers cannot be understated. Each contractual gain is a direct reflection of our actions, as many of these proposals weren’t even on the table, or were fought tooth and nail by producers back when negotiations recommenced in October. Considering we started this campaign only in the summer, this is a remarkable achievement. It’s also worth noting that many of these proposals were thought of or modified directly from rank-and-file members to the AFM, meaning we’ve established a voice to participate directly in our national contracts. This is something that has been structurally difficult through our union, but is the only way to get meaningful representation in our contracts.

Accepting the terms of this two-year contract not only gives us better wages and working conditions, but legal protections as we continue campaigning toward our ultimate goal. Here is a summary of our gains in the contract:

The tri-guilds (SAG-AFTRA, Directors Guild, Writers Guild) have achieved streaming residuals because of the direct influence they have on the means of production, giving them leverage with producers. Actions leading up to the Live TV negotiations will be crucial as well as sustained musician commitment in building leverage. While we didn’t reach our ultimate goal, we’ve learned that the more democratic the process, the stronger the results. We are encouraged by all the progress made in the relatively short time we have worked together, both internally and externally, and we are proud to band together and keep fighting for what all recording musicians deserve: a fair contract with streaming residuals.