For decades, the AFM has had to maneuver its contracts to address changes in recording technology. As technology will always continue to advance and create new ways to produce content, AFM recording contracts must always fluctuate to keep up.

In the past decade, this has been clear in the world of commercial announcements, colloquially known as jingles. In the past, jingles were mostly recorded in a series of midtown recording studios. These days, a music production company might get a call first thing in the morning from a client who needs content by lunchtime. The shift has been dramatic.

As music producers continue to face pressure to churn out material and expedite their production, it may come as no surprise that the filing of jingles under union contracts is on the decline. From a national standpoint, the decline is not as dramatic. For example, new use of pop songs in commercials has quadrupled in recent years.

At the local level, though, this increase of new uses contributes even further to a decline in session reports. Anecdotally, you can tell from watching television or videos online that there is no correlating drop in the number of jingles out there. If anything, there are more commercials now than ever before.

So, the question is, how is Local 802 addressing the drop in filing? This is an issue with many different components contributing to an across-the-board drop – and that means employing more than one solution.

How can we contribute to the solution? A couple of paragraphs here isn’t going to gain new signatories to the agreement, but musician education can go a long way. Let’s put it this way: If you were called to a session for a commercial tomorrow, perhaps to sweeten an already existing bed of music, to lay down an additional harp track or percussion or brass or even something more unique, would you know how to submit an invoice for your services? Do you know how to get yourself on a B-6 report form, ensuring you get the proper residuals when that spot gets re-used in the future? If not, keep reading. 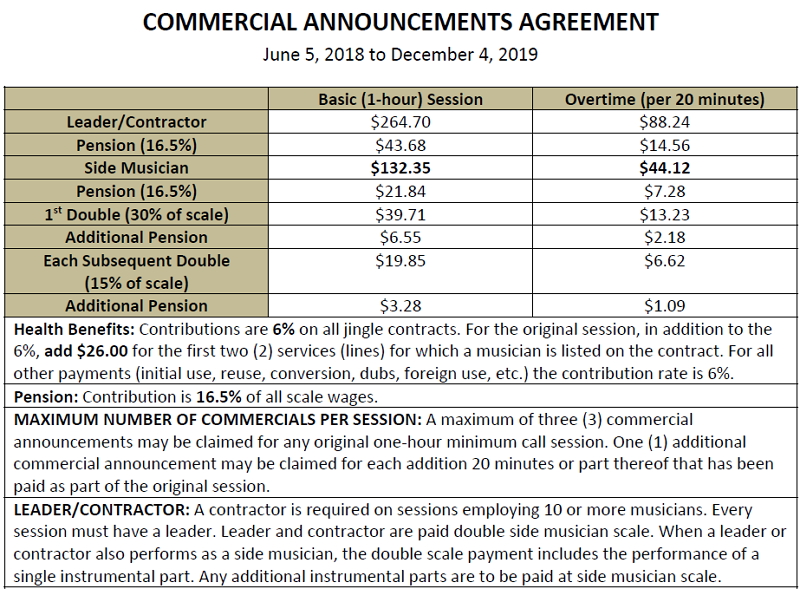 The jingles contract holds many perks for musicians. Do you know how to submit an invoice for your services and ensure that you earn the proper residuals owed to you?

The AFM Commercial Announcements Agreement is broken down into two general types of payments: sessions and use cycles. In ideal circumstances, the advertising agency is the signatory to the collective bargaining agreement and is responsible for all payments to be made, but very often, the music production company will be paid an advance and be required to pay for the session fees, then transfer the rights via an assumption agreement.

The session report memorializes what was recorded at the session and these days, of course, that’s not as cut and dried as it used to be. Gone are the days when commercial sessions were recorded in one orchestral session; now, various pieces of instrumentation might be compiled from many different sources in many different locations.

But, no matter how it all gets put together, the instrumentalists (and music preparation personnel!) should all be placed on the B-6 session report along with a listing of the spots that are being “claimed.” A minimum call session lasts one hour, allows for the recording of three spots and up to three minutes of music, and pays $132.35 per line. Pension is 16.5 percent of the scale wage. Health pays at 6 percent of scale wages on all contracts (even residuals!) but the session report allows for the addition of a $26 health contribution to each individual player on no more than two lines.

Now, it’s very common that a musician may appear on more than two lines on a session report, because the agreements calls for multiple parts to be paid on separate lines. That’s critical in this agreement, because residual cycles pay by line, regardless of what the session’s scale wage might have been.

All other premiums that you might expect are included as well: double scale for leader and contractor, the latter of which is required for a session involving 10 or more players (that’s 10 individual people, not 10 instrumental lines.) The first instrumental double is 30 percent and each subsequent double is 15 percent, but this is uncommon as jingles tend to pay instrumental parts separately.

Recall that I mentioned that spots are “claimed” on a session? When a commercial is first aired on radio or television, the agency pays for all the spots claimed on the session report in one “initial use” payment, a 13-week cycle. Beyond the first three months (or in a different broadcast medium) each spot’s usage is paid separately.

Commercial cycles can be paid beyond television and radio as well. There are provisions for Internet use, in either 8-week, 26-week, or 52-week usage. There are non-broadcast cycles, for advertisements used in places like movie theaters, sports stadiums, and kiosks. Foreign use can be paid in one- or two-year cycles.

And, if the agency so chooses, they can pay for all possible cycle uses for the first-year up front in one per-spot fee, to cut down on paperwork.

Hopefully this gives you a sense of how this agreement works and how and when you should be paid. Remember, if you are approached to perform for a commercial announcement, you can always call the Local 802 Electronic Media Services Department at (212) 245-4802 to ask any questions you might have. The scale wages for all our recording agreements are available on this website at www.local802afm.org/contracts.