Photos by David Finlayson below article

When Allegro first asked me to write about the recent New York Philharmonic trip to Hanoi, the parallels to last year’s North Korean adventure were immediately apparent: two foreign wars, two divided Asian countries with the U.S. supporting the South, both part of the effort to “contain” communism.

I have visited both places and the two countries could not be more different.

First and foremost, the visitor to Vietnam is free to move about without any official escort or “minder” steering you towards or away from places or activities.

We often refer to Vietnam as a communist country, but they call themselves socialist, and clearly there is a lot of room in their economic system for individual initiative.

Both countries are poor, but Pyongyang had a perpetual downtrodden cast to it.

Hanoi is vibrant and alive and busy with commercial activity, clearly a place that has no intention of staying poor for long.

We found English to be widely spoken on the street in Hanoi and people were eager to engage with us.

When we stopped in at the Mai Gallery to see the work of Vietnamese artists, the twin sisters who guided us through the gallery spoke English fluently, having studied it at the local university.

Later, a particularly persuasive street vendor who called herself Rose approached me.

Despite the fact that she was making a living hawking T-shirts to tourists, her English, too, was remarkably good and she was doing a brisk business outside our hotel as a result.

There are few traffic lights in Hanoi, but much traffic.

One of the first things you notice is the incessant honking, much more than in New York.

The majority of the vehicles on the street are motor scooters, along with some bicycles and small cars.

Most intersections are negotiated through an elaborate game of chicken, with one hand held firmly on the horn at all times.

Disconcertingly, the only way for a pedestrian to cross the street is to have the courage to step out, armed only with the knowledge that drivers will avoid hitting you as long as you maintain a predictable speed.

While the people on the street seemed quite poor, it is clear that some residents have money.

The tickets for the concert were surprisingly expensive, beginning at around $85.

My mother sat next to a couple from Saigon who had flown up to the capitol just to hear the concert.

(The roads between the two cities are very bad, so most of the commerce is done by air.)

They told her that the country was starved for this kind of cultural event and they seemed highly appreciative that we were there.

Although, the official name of Saigon has been changed to Ho Chi Min City, many or perhaps most people are still comfortable with the old name.

In fact, I was surprised to see “Saigon” embroidered on many of the T-shirts that are sold on the street, indicating that use of the old name is officially tolerated.

We visited the Hao Lo prison for a glimpse of history.

Built by the French in 1904 to incarcerate Vietnamese political prisoners, especially those agitating for independence, it only later became infamous as the “Hanoi Hilton” where U.S. pilots were held.

There are many photographs, all with explanations in English, and the majority of them focus on their French oppressors.

The French incarcerated and tortured an enormous number of Vietnamese men and women there; many had done nothing more serious than leading street protests.

I began to wonder if the political leaders in Washington who perpetuated that war had any notion of the intense fervor with which they fought to throw off foreign domination.

This is, unfortunately, a question that we need once again to be asking.

There were also a few photographs of demonstrations in the U.S. against the war, and the captions spoke about the solidarity of the American people with the Vietnamese struggle.

Neither there nor on the street were we able to detect any lingering anger or resentment toward Americans as a result of the war.

The concerts took place in the Hanoi Opera House, also built by the French in the early 20th century.

The stage was small for the Philharmonic and was a factor in choosing a rather classical program.

The acoustics are less than ideal, but it is clear that the Vietnamese cherish this venue, and they were eager to show their enthusiasm.

The first concert was broadcast to the plaza outside, although we were no competition for the continuously bleating scooter horns.

The second concert was broadcast nationwide on Vietnamese television.

Unlike Pyongyang, our presence in Hanoi did not have the feel of a diplomatic breakthrough, but rather was intended to reinforce their status as an up and coming Asian Tiger.

There are already many hundreds of Western tourists there, and it might be one of very few tourist destinations where the dollar is still strong.

The exchange rate is approximately 18,000 Vietnamese dong per dollar, so many of us enjoyed being millionaires, even if only for a few days. 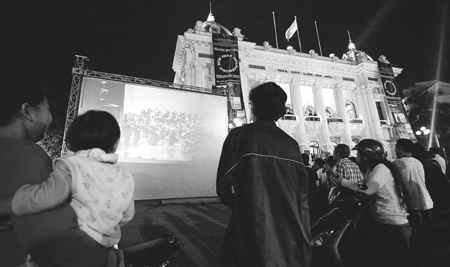 Spectators without tickets watched the New York Philharmonic’s concert from outside the Hanoi Opera House, on a screen. The two concerts were sold out; the second concert was taped for broadcast later on national television. The opera house, which seats 1,000, was constructed between 1901 and 1911 by French colonists and is a smaller version of the Palais Garnier in Paris. Maestro Alan Gilbert conducted a program consisting of the Brahms Violin concerto (Frank Peter Zimmermann, soloist) and Beethoven’s Symphony No. 7. Encores included Beethoven’s “Egmont” overture and Mendelssohn’s Scherzo in G minor from his Octet for Strings.