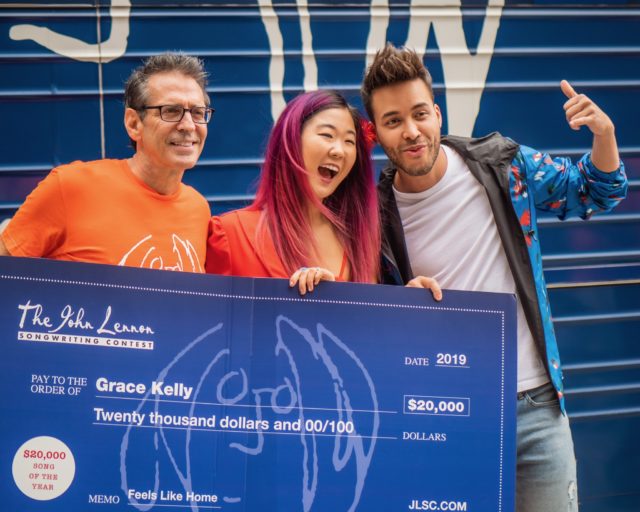 Grace Kelly with Prince Royce (right) and Brian Rothschild, the co-founder and executive director of the John Lennon Songwriting Contest.

Grace Kelly was awarded $20,000 for winning the John Lennon Songwriting Contest “Song of the Year” for her original song “Feels Like Home.”

“I am deeply grateful and honored to be presented this award,” said Kelly. “This award has made me even more committed to my songwriting and mission of building deep beautiful connection to all other beings through songwriting and performance!”

Kelly added, “I listened to and played a lot of Beatles music growing up. If I were to go back in time and tell 10-year-old Grace about future me winning this award, she simply wouldn’t have believed me! Dreams really do come true!”

Kelly is no stranger to the spotlight. Since performing at Barack Obama’s inauguration, Kelly has played over 900 shows as a bandleader in 35 countries around the world.  Kelly joined Local 802 in 2016 and has already been featured twice as a panelist in the Jazz Mentors programs.

“I originally joined Local 802 after I was asked to join Jon Batiste and Stay Human, the house band at ‘The Late Show’ with Stephen Colbert,” Kelly told Allegro in 2016. “It’s been an incredibly fun gig and so wonderful to learn all the benefits of being part of Local 802 and how the union looks out for us musicians. As a musician who is very busy touring in addition to doing TV work, I’m comforted to know there is a system in place to check all the details.”

Kelly was presented with the award as part of the 6th annual Come Together NYC Tour in partnership with the Mayor’s Office, City Council and Department of Cultural Affairs.

To hear the song, visit https://jlsc.com/winners/2018a/winners.php