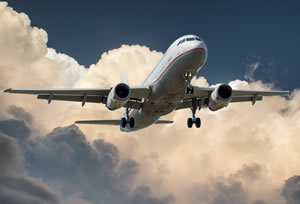 I’ve never loved flying, and turbulence freaks me out as much as the next person, but back when I had to travel with my violin, the most stressful part of flying was the boarding process.

Nowadays I just wander on board whenever it’s time, but with my violin, it meant scurrying on board quickly to get my violin into the overhead bin before everyone else put their suitcases in. And then sitting there wishing I could turn invisible, while people muttered about how their bags wouldn’t fit due to this odd-sized thing already in there.

Yep…flying can be tough even under the best of circumstances – never mind when you’re traveling for a performance or an audition, and you’re already stressed about what you have to do when you arrive.

So what does the research have to say about minimizing the impact of air travel and jet lag on performance? What can we do to make sure we’re in the best shape to perform when we arrive?

Stanford orthopedic surgeons Whitney Leatherwood and Jason Dragoo scoured the literature, and found 106 studies that were relevant to air travel’s effect on performance.

And though it turns out that jet lag is not the only factor that can potentially affect performance, it’s probably the one we notice most.

But how much of an effect does jet lag really have on performance? Is it a big enough deal that we should be taking into account the number of time zones we’ll be crossing when planning travel dates for an audition or competition?

What are the effects?

Well, you can start to see some of the effects of jet lag even across one time zone. But generally, it’s when you cross three or more time zones that the effects become really noticeable. Like fatigue and feeling sleepy at odd times, or being wide awake when it’s time to sleep, having difficulty concentrating, and so on.

And it can indeed have some significant performance effects.

One study looked at all Major League Baseball games played from 1997-2006 to see if there was a performance advantage for teams that were more in sync with the time zone in which the game was played. They analyzed all 5042 games in which at least one of the teams crossed a time zone, curious to see if the team crossing fewer (or no) time zones would have an edge.

Does it matter if you’re going east-west vs. west-east?

It’s often said that traveling east is harder than traveling west. And it’s certainly a lot less fun to force yourself to go to bed earlier and get up earlier (east), than it is to stay up a little later and sleep in a bit (west).

Which makes a lot of sense, because your body’s internal clock actually seems to prefer a slightly longer day – like 25 hours – than the 24-hour day we live by.

And studies have found that traveling east does indeed result in jet lag symptoms that are more severe, and last longer, than going west. One study, for instance, found that while westward travel (Frankfurt to Atlanta) had a noticeable effect on athletes’ performance for about 3 days, traveling east (Munich to Osaka) led to more significant symptoms, that lasted up to 7 days.

But wait! It’s not as simple as saying that traveling east is worse for performance than traveling west. The reality is a little more complicated (and interesting). Because it’s also important to consider at what time of day you will be performing.

Why your performance time also matters

Some people are early birds, while others are night owls. And research suggests that our natural “chronotype” could have an effect on performance – in that there may be certain periods of time during the day when we are more likely to perform our best.

For instance, even if traveling west is easier, how would it feel if you had to fly from NY to LA for a big recital that starts at 8pm Pacific – which to your NY-timed body clock would feel like 11pm?

If you’re thinking that this scheduling quirk would seem to favor the west coast teams, you’d be totally right.

Not only did west coast teams have significantly more wins than the east coast teams, they also won by more points.

Another 1997 study found a similar effect in the NBA, after looking at 8 years worth of games between 1987 and 1995. They found that the visiting team scored about 4 more points when they traveled east, than when traveling west. Presumably, this was once again because the west coast teams were playing at a time that felt earlier and more performance-optimal to their internal body clock.

But…what if you don’t have any control over what time you have to play?

This is where “phase shifting” comes into play, where you can take steps to start adjusting your body clock to a new time zone even before you’ve left home. This involves shifting your bedtime by 1 hour per day, strategically timing your exposure to light to make your body think you’re in a different time zone, and perhaps supplementing with melatonin (a hormone that regulates wakefulness, and while available over the counter, should still be something you consult with your physician about before taking).

So if you want to prepare your body for a trip west, you could initiate a 1-hr per day “phase delay.” Where you’d go to bed and wake up 1 hour later each night, get more light in the early evening hours to make sure you don’t get sleepy too early, and avoid light in the morning to prevent your body from waking up too early.

Preparing your body for a trip east, on the other hand, would involve a “phase advance.” Where you’d go to sleep/wake up 1 hour earlier each night, avoid light in the evening hours before bedtime to help you feel sleepy earlier, and get lots of light when you wake up.

But what if you do all this and still can’t get to sleep when you arrive in your new time zone?

One study, for instance, found that even after just 4 hours of sleep, a 30-min nap helped to improve not just alertness, but sprint times, and certain measures of mental performance too.

Which takes us to one last thing that can be a factor when traveling.

Because traveling tends to disrupt not just what we eat, but when we eat too. Both of which can have a meaningful effect on sleep.

For instance, if you arrive at your hotel around 8pm, and are starving because the airplane Salisbury steak left quite a bit to be desired, it can be tempting to chow down on an overstuffed Chipotle burrito.

However, that means that when you go to sleep a couple hours later, your body is still going to be devoting resources to doing its thing with the burrito, instead of resting and making the most of the precious time you have before the alarm goes off.

So smaller meals before and after the flight are probably better than big meals at the wrong time.

Your choice of food can also help or hurt your efforts to adjust to a new time zone.

For instance, if you’re starting to feel a little sleepy in the late afternoon, and you know a 3-hr nap would totally destroy that night’s sleep, it’s probably best to avoid the high carb/low protein Auntie Annie’s pretzel that’s screaming your name, and go for something like a high protein/low carb greek yogurt instead.

And maybe save burgers, pizzas, and all those other tempting treats for after the performance, as animal studies suggest that high fat/high calorie foods could make it harder for your body to adapt to a new time zone.

Leatherwood and Dragoo distilled what they found into nine recommendations. Which are listed at the very end of their article available here. And also paraphrased below:

There’s also Philadelphia Orchestra concertmaster David Kim’s tried and tested jet lag formula, which is a quick read, and reflects the recommendations from the research above. See http://davidkimviolin.com/?page_id=68.)

But if you’re thinking to yourself, sheesh, that’s still a lot of planning to do. Isn’t there an app for that? I haven’t had an opportunity to put it to the test, but McGill University Ph.D. candidate Jay Olson has developed a free jet lag-fighting webapp called Jet Lag Rooster at www.jetlagrooster.com. Has anyone had any experience (good or bad) with such apps?

Send feedback to Dr. Noa Kageyama at bulletproofmusician.com, where this piece originated. Reprinted in Allegro with kind permission from the author!