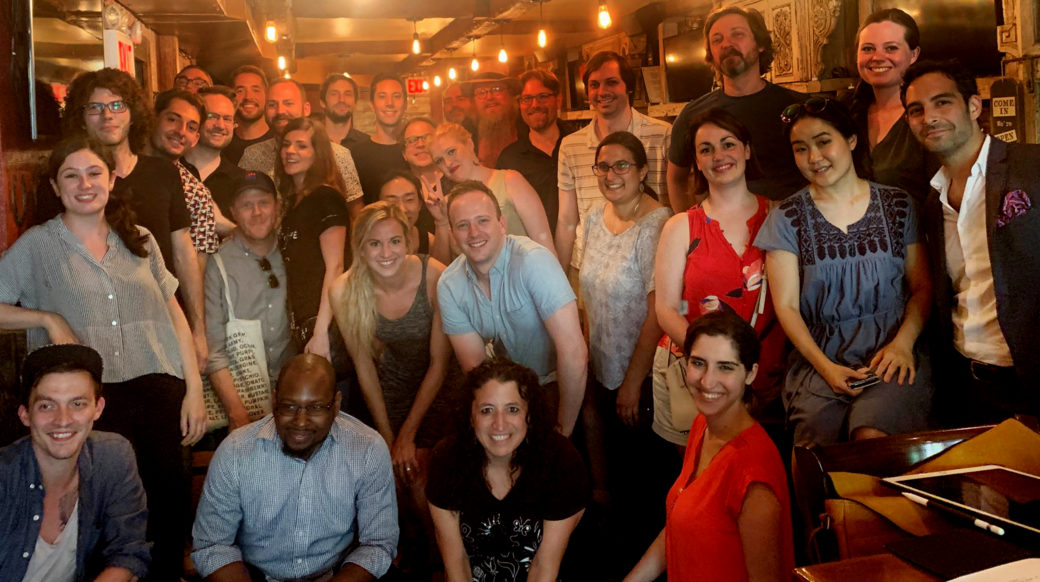 Musicians of Distinguished Concerts International New York have won union representation! Their campaign was an inspiring grassroots effort and one of the most successful Local 802 organizing victories in recent memory. So how did they do it? Below, musicians reflect back on a remarkable year of strategy and action…

In January, a group of musicians ate dinner together between a rehearsal and concert at Carnegie Hall. Dinner conversation went down a familiar path: the feeling that this non-union presenter – Distinguished Concerts International New York – had not been treating their musicians fairly for years, yet this kind of complaining wasn’t bringing about any resolutions. The phrase, “At some point, the union is going to step in,” was repeated, although no one knew why it was taking Local 802 so long to crack down on a non-union orchestra in a venue as high-profile as Carnegie Hall. By the end of the meal, it was clear that this group wanted to see changes in how the musicians were being treated, and they were ready for this gig to be covered under a union contract. What wasn’t clear was how to make that happen.

CHRIS SCANLON (TRUMPET): “When I first heard people talking about making this a union gig, I thought, ‘Oh brother, I’d love for that to happen but it’ll never work LOL!’ But players had been unhappy with a wide range of specific working conditions on the gig for a long time, common issues that we didn’t encounter in our other union jobs. The organization was growing and performing at the best halls in town, with some of the top players, and it seemed like a no-brainer to raise the standards of professionalism for performers by making it a union gig.”

CYNTHIA SMITH (VIOLIN): “When I first heard talk about unionizing, it was a relief to know that other people had been thinking the same thing. I have been playing since Day 1, and as more of my other work (playing and teaching) has become union work, it seemed more and more unusual that DCINY was not union. I knew that I wanted to be as involved as possible in the organizing process.”

After approaching 802 to explore the path to unionizing DCINY, musicians began forming a representative organizing committee and meeting regularly to strategize and train with the Local 802 Organizing Department. One significant challenge in the outreach process was trying to determine who actually plays the gig. DCINY doesn’t publish the names of the musicians in the programs and the hiring process is opaque and secretive. It took many hours on Facebook to formulate an accurate roster, and a lot of trust between musicians as they began having organizing conversations with their colleagues.

CYNTHIA SMITH (VIOLIN): “Before taking the step of signing union cards and formally asking for recognition, we firmly believed that a strong majority of musicians needed to be supportive of the idea of union representation. We would not have moved forward unless we knew this is what the group wanted. This meant combing through years of archived concert photos to identify all of the orchestra musicians who have played in DCINY in the last three years, compiling contact information and having one-on-one conversations with close to 200 musicians.”

One of the key skills that the newly-formed Organizing Committee worked to build was talking with colleagues one-on-one. Musicians learned a great deal about how to be active listeners when speaking with other members of the orchestra, learning that the ability to ask questions about their colleagues’ feelings on the gig and to really listen to their concerns was crucial to the success of this campaign. Through many one-on-one conversations with musicians from the orchestra, support for unionizing slowly grew.

CHRIS SCANLON (TRUMPET): “Many folks playing the gig are in similar life/professional situations while others are very different, and being able to truly see situations through those different lenses is an invaluable skill developed in this process.”

After establishing informal support from most orchestra members, the Organizing Committee made the decision to move forward with signing union authorization cards in order to file for a union election with the National Labor Relations Board. After more one-on-one conversations, the vast majority of the orchestra signed cards, and, when 802 filed for an election on
July 1, the musicians went public with their organizing campaign.

The election campaign and management’s response

ANDY BLANCO (PERCUSSION): “The Organizing Committee hoped that management would voluntarily recognize our union, partly because we had done such extensive and exhausting one-on-one outreach to every musician we could reach, and because an overwhelming majority of the orchestra signed union recognition cards. There were also many musicians, particularly those who were friends with members of management, who hoped to avoid any hostility during this process. Instead, management’s reaction was exactly what Organizer Lily Paulina and Organizing Director Joy Winkler prepared us for: DCINY management launched an aggressive anti-union campaign that was intended to scare musicians into voting ‘no’ in our election.”

As the three-week election period unfolded, the Organizing Committee worked with 802 staff to create a social media presence to share progress with members of the orchestra and respond to some of the messaging coming from DCINY management.

TALLIE BRUNFELT (VIOLIN): “Local 802 Communications Associate Maria DiPasquale helped us mount a fantastic social media campaign that highlighted our sense of community, especially in showing the support from other 802 members, and kept people informed and engaged.” 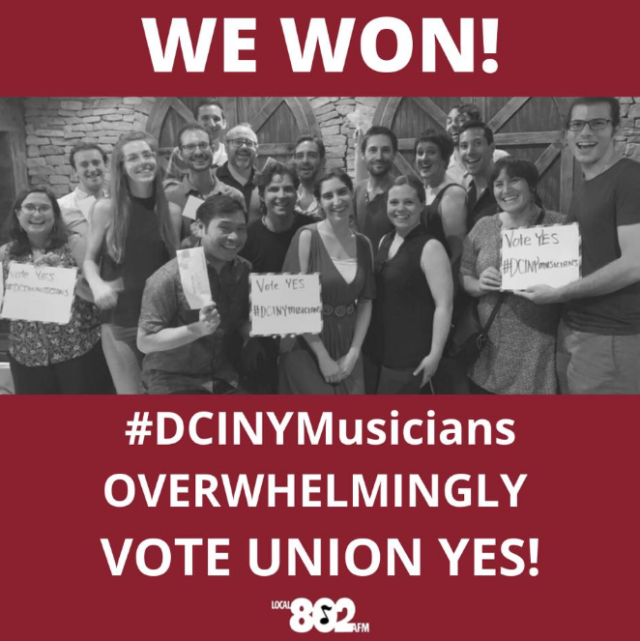 Above, one of the many posts from the campaign. Follow the musicians on all social media @DCINYorchestra

CYNTHIA SMITH (VIOLIN): “I am proud of taking the high road and not taking the bait from management. They broadcast a loud anti-union message with little basis in fact while at the same time trying to make musicians feel guilty for wanting a better work environment for themselves. We worked to stay factual and positive and to not even address all of the negativity.”

With every hostile communication from management, support for the union grew. By the end of the election period, we had more union support from the orchestra than we did at the time we asked for voluntary recognition!

At the close of the voting window of our election by mail-in ballot, a handful  of members of the orchestra went to the National Labor Relations Board to watch the ballots be counted. The final count was 113 “yes” to 14 “no,” with 89 percent of voters choosing to be represented by 802.!

TALLIE BRUNFELT (VIOLIN): “One surprise was a general lack of understanding of what a union is and how it works. Like any democratic institution, a union’s strength comes from the active involvement of all of its members, and unfortunately we as a community have grown complacent in our commitment to protecting each other. A lot of our organizing conversations were spent discussing that the union and the musicians of DCINY are one and the same – musicians are the union, and musicians have to work to shape our own reality.”

ANDY BLANCO (PERCUSSION): “Every member of 802 needs to learn how to be an effective organizer. DCINY has been operating in Carnegie Hall and Lincoln Center for over 10 years. If every union musician had the organizing tools we learned from Local 802 organizers when DCINY started producing concerts, we’d have 10 years of higher wages and benefits!”

ANDY BLANCO (PERCUSSION): “This campaign has brought an increased amount of trust and camaraderie between a diverse group of freelancers. Organizing conversations were respectful and confidential. Disagreements were civil and debated without judgement. The level of engagement at the end of this election campaign gives us hope for the future of 802.”

TALLIE BRUNFELT (VIOLIN): “One thing that contributed to this win was the overwhelming sense of community and connection to other musicians in the orchestra. This was built through the long, slow, gradual building of trust in each other through one-on-one conversations in which every musician felt heard and included. This laid the foundation of strength that was able to withstand management’s anti-union rhetoric, and motivated people to actively participate in the campaign and voting process.”

Looking toward bargaining for a first contract, DCINY musicians rely on that foundation of trust and solidarity they built with each other and with the Local 802 membership at large. United we bargain, divided we beg!