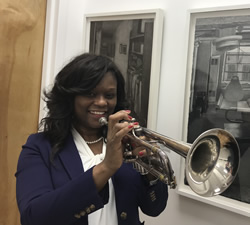 Assemblymember Rodneyse Bichotte is a Democrat representing District 42, which includes the communities of Ditmas Park and Flatbush in Brooklyn. First elected in 2013, Assemblymember Bichotte is the first Haitian-American woman elected to office in New York City and is now an important member of the Democratic-controlled Assembly. She has emerged as a strong leader on legislation for small businesses and minority-owned businesses, serving as chair of the Oversight of Minority and Women-Owned Business Enterprises Subcommittee.

What is your favorite type or style of music? I listen to a lot of R&B and what I suppose people call “pop,” but I also love jazz and grew up listening to it.

Who are your favorite musicians of all time? Whitney Houston, Miles Davis, Lauryn Hill and Barbra Streisand all stand out. Miles’ recordings of “So What,” “My Funny Valentine” and “Miles Runs the Voodoo Down” are all extremely important to me.

What song or artists are you listening to the most right now? Last year I was listening to a lot of rap – lots of Kendrick Lamar and people like that. Now I’m back to R&B and listening to WBLS 107.5 on the radio.

If you could start a band with your colleagues in state government, who’d be in the group and what would they play? Assemblymember Yuh-Line Niou is a great musician, and I’d have her on electric violin. Councilmember Jumaane Williams is a pretty good singer, and so I’d have him on vocals, along with Assemblymember Nick Perry. I’d play the trumpet and my good friend State Senator James Sanders would be on the drums. Naturally, Assembly Speaker Carl Heastie would be the bandleader.

What is the most memorable live music experience of your life? Two stand out. The first was in fourth grade, when Mrs. Goldman asked me to participate in the class play. The next thing I knew I was Dorothy singing “Somewhere Over the Rainbow”! The second was when I was a first-year student at Buffalo State College. We performed a poem written by Langston Hughes called “Negro.” I first read it in French, then in English, and then sang a solo of the song “Crying for Freedom in South Africa” by Sweet Honey in the Rock. This was right at the end of apartheid in 1991. Both of these performances proved extremely important for me because they helped me develop the confidence I need in my life today. Musical performance helped shape me into who I am now.

What role did music play in your life as a child? Do you have family members who are musicians? Music has always been a part of my life. My father was a famous saxophone player. He made sure that music was always playing, and that we were always playing it. I learned my solfeggio from him, and my brother went on to become a famous Haitian saxophonist as well. That music, that tradition and those values have helped keep me close to the Haitian community I represent today, a community that I’m proud to represent. Also, I attended LaGuardia High School of Music & Art and Performing Arts. I studied singing and joined the All-City Chorus. That was when I had the great opportunity to perform at Carnegie Hall. What an experience!

What are some of the challenges you think musicians face in New York City? Can the state play a role in addressing them? Musicians face a fundamental challenge in our society. Being a musician is seen as a hobby. It’s not. But because people don’t treat music as a profession, we don’t adequately value musicians’ contributions to our communities and economy. As a result, arts funding is the first to get cut. Our state needs to do more to ensure musicians can thrive, from developing tax credits for musicians and the music industry, to securing more funding for the arts and for music education in schools.

And finally, if you were a musician, what instrument would you play? I was a singer at LaGuardia High School, but if I were a musician today, I’d play the trumpet!