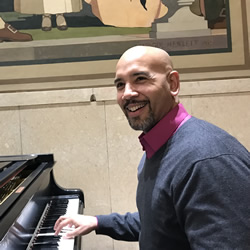 Ruben Diaz Jr. is serving his third term as Bronx Borough President, during which time he has focused his energy on economic development, housing, health and wellness, education and public safety. President Diaz has long been an advocate for the arts and the music community in the Bronx, recently leading an effort to create Bronx Point, a mixed-use development that will include affordable housing, education space, and the nation’s first brick-and-mortar hip-hop museum.

What is your favorite type or genre of music? Everyone here knows that I am a student of hip-hop. I’m a hip-hop kid. It’s part of who I am.

Who is your favorite artist of all time and who are you listening to today? Prince. I know some people could be shocked by this, but I love his music even more than Michael Jackson’s. Right now, I’m listening to some of the greats – Notorious B.I.G., Bootsy Collins, Earth Wind & Fire, DMX (who I think is seriously underrated), Big Daddy Kane, and Bruno Mars. I also have to say that, as a father, the music I listen to is often influenced by my two sons. Throughout their lives, the music they have listened to has been the music I’ve listened to.

What was the first album you ever purchased? This is easy: “Rock Box,” a single from Run-DMC’s first album. [Editorial note: the borough president started reciting lyrics…and it was impressive!]

If you could have dinner or drinks with any musician, living or dead, who would it be? I’ve been fortunate to already know many of hip-hop’s greatest artists. I grew up with many of them in the Bronx. That said, I’d want to have a drink with Prince. I would want to ask him about his artistic and creative process. How did it build itself in his head? He was more than a performer, singer and instrumentalist. He was an orchestrator. He was a composer and writer. He was one of the greatest, ever.

What was the first concert you ever attended? Wow, this is hard and if you had asked me in my teenage years I would have categorically denied it, but I went to a Menudo concert. My brother and I hated Menudo. We had to. It was expected of teenage boys to hate them. But my sister absolutely loved everything about that band, and so we had to go with her. Trust me, we kept that pretty quiet back then.

Where is the best place to hear live music in the Bronx? Orchard Beach. During the summer, I help organize and host live salsa every Sunday, and it is crazy. It’s tons of fun and we go all the time.

Describe the role music plays in society and our city. Music is integral to who we are as human beings. It’s the fabric of our character, and in the Bronx it’s part of our DNA. In every society and every culture in every time, music has been an essential component of life. I defy you to find a civilization that didn’t love music.

What makes the Bronx such a rich and artistically special place? That’s a very hard question, but I believe it comes down to identity and the people who live here. Music in the Bronx is a story of cultural fabric and inclusion. Let’s use salsa as an example. People from Puerto Rico and the Dominican Republic came to the Bronx, bringing with them the tradition of the mambo. But they changed it. They added some…sauce…something special and unique that resulted in salsa (which, by the way, literally means “sauce”). Hip-hop follows a similar story. The Bronx is a place where people came to play their music, where they built upon their common experiences and their cultural identity. It’s where they took the pain, the challenges, the love and the energy and created new languages. This community is one of inclusion, addition and creativity, making it a breeding ground of expression and music.

What are some of the challenges facing musicians in New York City and in the Bronx? We can start with the obvious: affordability. There aren’t enough places for musicians to hone their skills and craft. There aren’t enough places where musicians can afford to work and perform, and musicians are being priced out of their communities. It’s also incredibly difficult for musicians to have the opportunity to be heard for the first time, partly because they can’t make a living with recorded music, and partly because of the way technology has flooded the airwaves. You only hear the same top 20 songs on the radio, and the digital platforms that exist now make it impossible to make a living and get paid for music.

What can our local elected leaders and our government do to better support musicians and the arts? We need to help musicians with the business of music. It isn’t enough for a baker to make the best bread. He or she must learn small business practices and business planning. The same is true for musicians. The city is much better at providing opportunities and support for traditional small businesses, but we must help artists and creators too. That is more than just fixing laws and legislation – it’s about providing support. A young artist needs to know the business side of things. It’s why labor unions are important too. Without knowledge and support, musicians will always find themselves getting jumped by people who want to exploit them.

And finally, if you were a musician, what instrument would you play? I’ve long thought that in hip-hop, the piano was the most important instrument in the band. A solid piano line and keyboard player will always make a song or track better. I’d play the piano.