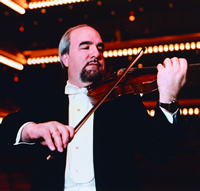 He has been concertmaster of the New York Philharmonic since 1980, but Glenn Dicterow also has enjoyed a diverse career as a soloist, educator, and recording musician. Having worked in both Los Angeles and New York City, he has experienced firsthand the challenges that recording musicians have faced in the film industry and in the highest echelons of the orchestral world. At Juilliard and in the Orchestral Studies Program at the Manhattan School of Music, he helps prepare the next generation to navigate the complexities of becoming a professional musician. Passionate and sincere yet soft spoken, Dicterow openly discussed some of the crazy things that happen on the road, movie music, and the importance of music in our lives.

Karen Fisher: You generously lent your name to the union’s Live Music Campaign, which we very much appreciate. Would you talk about that and tell us why live music is still relevant to the city and to society at large?

Glenn Dicterow: I grew up in a different generation. My father was in the Los Angeles Philharmonic from 1946 on and did a lot of freelance work there. In those days, there was no 52-week season for the orchestra. The rest of the time, people had to look around for other work. He did “Peter Pan” and “Annie Get Your Gun” when he wasn’t working for the Philharmonic. The size of the orchestras in those days was awesome. They crammed the pit with as many musicians as they could and it actually sounded like something. Now, if you go see a Broadway musical, you’re lucky if you see six people in the pit – and it sounds like it. It is just not the same thing. Case in point with the Philharmonic – when we do “Follies” or “Sweeney Todd,” you hear the difference. When the score is relegated to electronic instruments, it not only compromises the artistic side, but puts a lot of people out of work. People don’t realize, even in movies, how important the music is. We are the unsung heroes. If you’re lucky, you see musicians in the end credits. It is maybe the last thing after the catering, plumbers, and drivers. When we had our show with John Williams two years ago, they showed a clip from “Raiders of the Lost Ark” with – and then without – the score. Without the score, the same scene fell flat. People were just astonished at what the music added.

Karen Fisher: I attended that concert and the difference was remarkable.

Glenn Dicterow: It’s an incomplete piece of art, as if you left half a painting. It really adds another dimension. People don’t realize it. It’s a perception and an educating process to get the younger generation to know what music is and what it adds to our life.

The public reacts to what they are fed. When you have a budget for a movie, the music is the last thing that is done. Whatever is left over at the bottom of the barrel is relegated to the score. Now, in John Williams’ case, Spielberg will not make a move without him, but in other cases, it’s just, “O.K., let’s just get this done,” rather than, “This is the focal point; this will make or break the movie” – and it does very often. A score can totally and completely convince an audience that it’s a great movie even if it is not!

Karen Fisher: Speaking of film scores, you have recorded a number of them.

Glenn Dicterow: I did a lot of recording in L.A. when I was in the L.A. Philharmonic in the 70’s, then exclusively in the studios for one year before I came to NY. In the 90’s I did a substantial amount of movies and recordings here in NYC along with my job as concertmaster with the Philharmonic. So I have seen it dry up, I have seen studios close, and have seen it go to Prague and Warsaw where they are happy to do it for peanuts.

Karen Fisher: Musically, how does studio playing differ from playing with the Philharmonic?

Glenn Dicterow: It depends. Who is the composer? How many cues have to be done in what amount of time? It’s a huge challenge. In the Philharmonic, 90 percent of the time you are playing pieces that you have played before. When you are sitting in the studio, you are seeing that cue for the first time and often you see the word “solo” over it. You have to put that in performable form very quickly because time is money. Obviously you have to be adept at sight reading and make something sound good after the first rehearsal run-through. If you do less than three cues an hour very often the producer gets hot and bothered about that. He wants speed and he wants perfection so it’s a little disconcerting, but that is the nature of the beast. The other thing is that you don’t really get a chance to digest the music. You have to spit it out really quickly and then it’s gone and you have to wait until the movie comes out before you ever hear it again. Chances are it will never be performed live on stage again.

Karen Fisher: Do you think smaller, regional orchestras should take their cue from what is popular and change their programming to attract more people?

Glenn Dicterow: It’s important to mix and match. There is a delicate balance between doing the movie concerts and pops concerts that pack in a standing-room-only house. Once they’re in, it’s important to educate them to know that Mahler exists, or Beethoven or Brahms and expose them to that, too. I think every orchestra needs to do these kinds of things. The NY Phil has been doing it to raise money and help the pension. We are working on that very carefully right now. Also, those Met broadcasts are helping. The camera work is really amazing and gives a real personal backstage experience.

Karen Fisher: And, they are showing the orchestra…

Glenn Dicterow: Yes! It’s wonderful how they are doing that and other orchestras are following suit. It takes a new type of approach and more imaginative thinking on the part of managers to help the struggling orchestras. Classical music has always been a struggle unless you have a crossover – someone like Lang Lang with almost pop star status. They are very few and far between. You have to be astute and really perceptive of what audiences are asking for. We need to hang in there and educate people. If classical music is to survive, certainly that’s the case.

Karen Fisher: The Philadelphia Orchestra was recently forced to vote themselves out of the AFM pension fund. How do we stop that from happening in other orchestras?

Glenn Dicterow: Everybody is suffering in this economy, but basics are health care and pension. What do you do after you retire? Poor management has forced these orchestras into horrible positions at this point. If anything, it is going to force some people to never retire, and people want that part of their life fulfilled. Pensions are an essential part of American life. I think it’s important to be strong and united and insist on it. More than anything else, it’s hanging a lot of negotiations up. Before you get to anything else, that’s the first thing they want to downsize. I don’t know what the fix is, but I know that we are in a lot of trouble if we don’t fight for this.

Glenn Dicterow: Well, maybe that’s what it takes. Our West Coast friends seem to be doing a lot better than we are.

Glenn Dicterow: And that was without Jimmy Levine. Of all places, New York should not be having this problem.

Glenn Dicterow: I think the schools are starting to get smarter about that. In school, you are in this insular community where everything is arranged for you. Then you graduate and everybody thinks they are going to have a solo career. You have to start preparing before you graduate. You have to be business smart, you have to be able to communicate, and you have to know the computer. It is important to be able to communicate not only musically, but verbally. In the early 1900’s the performer would get up and play. Now, that is not enough. You have to be light on your feet and be smart enough to get people to your next concert and even to get your next concert.

Glenn Dicterow: There was one time, I forgot exactly where, but all our string instruments were left on the tarmac in something like 110-degree weather with 100 percent humidity. They weren’t able to get them to the hall and they were left out in the blazing heat of the sun. It was just a disaster. Mostly weird things happen on tour, but recently we were in Central Park with Andrea Boccelli. The weather had been nice all week but that night, the rain was torrential and it was about 38 degrees on stage. We had to do that concert live with our fingers frozen and we were freezing in our black shirts, not even our jackets because it was being televised.

Karen Fisher: What are your thoughts on the orchestra’s trip to North Korea a few years ago? Do you think it made any lasting impressions on them?

Glenn Dicterow: I think it was important for us to do. Certainly it was a mind -blowing experience in my life. I had been to Russia in the 1970’s and had traveled to iron curtain countries so it wasn’t totally alien to me to know what that was like, however I had never seen anything like North Korea. It is a police state and nobody is allowed to go anywhere without the knowledge of the “great leader.” So our visit was 48 hours of our being watched. The whole thing was orchestrated from beginning to end like a Hollywood set. There were lights on where it was typically dark. It was all a show. Everybody had minders who were interpreters and spies. Some people wanted to jog and those who did were followed in cars. The bottom line was when we played our concert, the expressions on their faces wasn’t something you could cover up. When we played their famous song “Arirang” which is a folk song common to both North and South Korea, everybody broke down and started crying. Did we make a lasting impression? I think we did. I think we will live to see the borders eased up.

Karen Fisher: The musicians of the Philharmonic have a certain reputation as a group of being pretty hard on conductors and each other. Where do you think this came from? Is it fair?

Glenn Dicterow: That comes from way back. Look, New York is a tough city. There are a lot of wonderful players in this orchestra – soloists – who decided they wanted to stay in one place, so you have a lot of personalities who act like they are deserving, and they are. But, you have to understand also that the orchestra has changed. Years ago there was maybe one woman. Now there are more females than males in the orchestra. Also, demographics have changed. The reputation that we might have garnered way back is no longer sustained. If anything, it is much more sedate than other orchestras. I know there were certain conductors who were afraid to come. The reputation seems to live on, but it is totally unwarranted at this point. We are actually very open and warm.