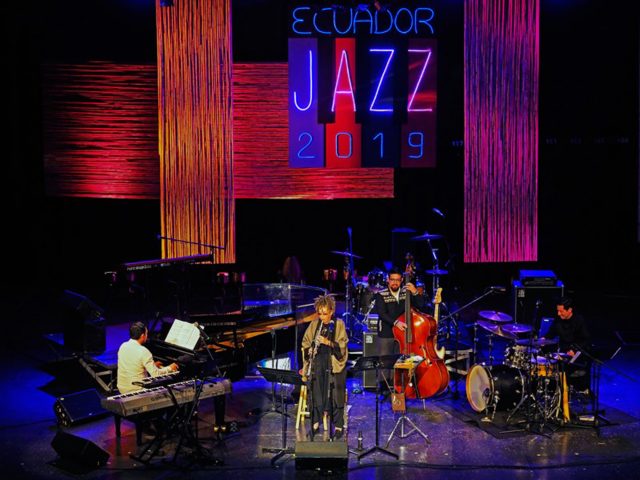 Saxophonist Su Terry (pictured in the middle) moved to Ecuador and is now a member of the thriving jazz scene there.

Trumpeter and Local 802 member Walt Szymanski likes to go mountain climbing. In 2010 the Detroit native and former resident of Brooklyn started looking for mountains in the country of Ecuador, located in the northwestern part of South America, bordered on the west by the Pacific Ocean. Have horn, will travel, of course, and soon, throughout Ecuador, the word was out that a great trumpeter was in town. This led to a professorship at the Berklee sister-school Universidad de San Francisco, and the musical directorship of Teatro Sucre Nacional, both located in Quito, the nation’s capital.

Some years ago I remember having lunch with Walt at Dizzy’s, our favorite diner in Brooklyn. Ecuador was the main topic of discussion, as he had already relocated there and I was getting ready to do the same. “I didn’t initially go there to play music,” he told me. “I just wanted to hike in the mountains, go to the beach, and chill out. At first I didn’t know anything about the music scene there.”

When I began spending winters in Cuenca, the third largest city in Ecuador, there was virtually no jazz scene at all apart from some gigs with the few players who were there at the time, including guitarist Cory Sea, percussionist Danilo Abad (now in Buenos Aires) and bassist Christian Torres, who was also the principal bassist with the Cuenca Symphony Orchestra. But in 2012 everything changed. Jim Gala, a Bill-Evans inspired pianist from Rochester, relocated to Cuenca from the Philippines. Having had experience running clubs for his father and later on his own, his dream was to create a national jazz organization. Eight years later the Jazz Society of Ecuador is still thriving, thanks to Jim and his dedicated staff. It’s truly a society, where staff and performers drop by on their nights off, and all the servers are also artists and performers who occasionally sit in with the band or perform between sets of jazz. Cuenca is a big tourist destination, and the clientele of the society consists of tourists and locals, including the artistic elite of the city. The current U.S. ambassador and his wife (as well as the previous two ambassadors) make it a point to drop by the society whenever they are in town. The Jazz Society of Ecuador is a living example of “if you build it, they will come.”

I have not yet visited every country in South America, but my sources tell me there is a jazz club in La Paz, Bolivia; several in Buenos Aires; a Blue Note club in Rio de Janeiro; and more than ten clubs that feature jazz in São Paulo. When I was in Medellin, Colombia a couple of years ago, I played in several small clubs with excellent players, some of whom are on the college jazz department faculty at University EAFIT.

In Peru, there is reportedly a club in Lima called the Jazz Zone, which I have not visited. However, I did manage to find a very good band at a little place in Cuzco which featured a guitarist, saxophonist, bassist and cajón player. The band was playing a bizarre mix of 70s American pop music and contemporary jazz. The cajón player made his box drum with snares sound like an entire drum kit.

The unlikely location of Punta del Este, Uruguay is the home of a jazz festival put together almost singlehandedly by Francisco Yobino every year since 1996. Jazz fans don’t get more ardent than Francisco. The entrance to his ranch is festooned with flags for the festival, and his living room is paneled ceiling to floor with jazz posters and record jackets. In a conversation with him a few years ago, he mentioned to me that he obtains all the sponsors himself and receives no help from the government. This type of situation, which certainly occurs not only in South America, has always puzzled me. When the government doesn’t realize the value of an annual festival that brings in thousands of tourists and contributes to the economy of the area, there’s something wrong.

In Chile, the go-to spot would be Club de Jazz de Santiago, located in the nation’s capital city. This venue has existed for more than 60 years and has a reputation for presenting the top players internationally since its inception. A variety of styles are represented, including Dixieland, mainstream, bebop and blues.

I look forward to discovering more jazz spots in the future. In general I’m impressed with the Latin American jazz musicians I’ve played with here; many of them have truly absorbed this music which has a completely different rhythmic feel, harmonic development and melodic sense from what they have grown up with. As far as the audiences, I find them very open to listening to and appreciating jazz. At a recent concert in Cuenca, in the middle of August which is vacation month and locals go out of town, we drew 800 people.

There are also unique opportunities in South America to explore various fusions of jazz with local music and musicians. Guitarist Donald Regnier and vocalist Maria Tejada, based in Quito, are doing just that: creating a fascinating and complex repertoire that displays its roots in American, Ecuadorian and Brazilian music. Local 802 member Walt Szymanski has taken a different route: with his group Zulu Kings, he mentored his young Ecuadorian colleagues in the synthesis of New Orleans second line culture with Andean rhythms and sensibilities. Jazz the Roots is an Ecuadorian group that mixes jazz with reggae. The group Pies en la Tierra, also based in Quito, just finished a successful European tour doing their specialty brand of Andean/jazz fusion.

I sometimes have the chance to perform with Ecuadorian musicians who specialize in very traditional, shamanic sound palettes ranging from various types of wood flutes and hand percussion to condor feathers, and even leaves from plants. Ethnomusicologist Carlos Freire and I have jammed together, he on the above-mentioned instruments and myself on clarinet, to great effect. Last year I was invited to play with the legendary group Altiplano led by Mauricio Visencio, at the Carlos Cueva Tamariz theatre in Cuenca. The combination of native flutes and percussion with the saxophone took all of us, including the audience, to an elevated dimension. (I think the smoke machine on stage helped with that.) There is also a flamenco group here with which I often perform. It’s fun to bring a jazz conception to this passionate and lyrical genre that originated in the Iberian peninsula.

I find it interesting that jazz, a North American art form which derives much of its development from a persecuted past, finds its best partners in genres which came about in a similar way. Now that many so-called popular music genres are being codified and presented as courses of study in universities, it’s even more important to remember those historical events and social attitudes which on one hand were unfortunate, but on the other hand did contribute, albeit unintentionally, to a flowering of music and other art forms that continue to offer humanity much pleasure and fulfillment of the spirit.

In closing, I can only say — come visit us at the Jazz Society of Ecuador, and bring your ax!

Like musicians worldwide, our gigs and tours have been canceled here in Ecuador. To help compensate, the minister of culture has announced a program called Desde Mi Casa (“From My House”), which will allocate funds for Ecuadorian musicians to broadcast performances from their homes. Public reaction to this announcement, however, has not been favorable. While some people support the initiative, there are many more who say it is a waste of money that could be spent providing food and medical supplies. They say you can watch concerts on YouTube, so why should the government pay musicians when the funds can be used elsewhere for “more important” things.

Apparently very few consider how little Ecuadorian musicians are paid, and how scarce the work is, even in normal times. This situation is not unique to Ecuador, of course. Professional musicians worldwide continue to fight this same battle, a battle we have been fighting for decades, perhaps centuries. Music is a calling for which relatively few are chosen. Music is a mission we chose to accept. Music is a responsibility we are proud to bear.