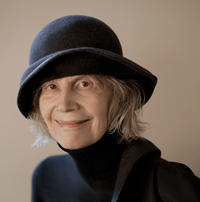 Pianist Joanne Brackeen, a member of Local 802 since 1966, has earned the prestigious NEA Jazz Master designation this year. Whatever the musical setting – whether solo, duo, trio, quartet, or quintet – Brackeen’s unique style of playing commands attention. In addition to her captivating and complex improvisations, she has written intricate, rhythmically daring compositions in a wide stylistic range.

Brackeen was a child prodigy who at age 11 learned to play the piano in six months by transcribing eight Frankie Carle solos. By 12, she was already performing professionally. Some of her musical constituents at the time were Art Farmer, Dexter Gordon, Charlie Haden, Billy Higgins, Bobby Hutcherson, Scott LaFaro, and Charles Lloyd. Simultaneously, the Los Angeles Conservatory heard of her musicianship and offered her a full scholarship. She attended classes less than one week before deciding the bandstand was more significant.

Brackeen married and moved her family, including four children, to New York in 1965. She began her career there with such luminaries as George Benson, Paul Chambers, Lee Konitz, Sonny Stitt, and Woody Shaw among others. She joined Art Blakey’s Jazz Messengers in 1969, becoming the first and only female member of the group, staying until 1972. Brackeen then performed extensively with Joe Henderson (1972-75) and Stan Getz (1975-77). After leaving Stan Getz’ quartet, she emerged as a leader.

Traveling and performing mainly with her own band was a delightful and enriching experience for both Brackeen and her band members, who included Terence Blanchard, Michael Brecker, Ravi Coltrane, Jack DeJohnette, Eddie Gomez, Billy Hart, Horace “El Negro” Hernandez, Branford Marsalis, Cecil McBee, John Patitucci, Chris Potter and Greg Osby. She has recorded more than two dozen recordings as a leader, which include 100 of her 300 original compositions. She appears on nearly 100 additional recordings.

Sharing her musical knowledge and passing on the tradition have been important parts of Brackeen’s career. In addition to teaching at Berklee and the New School, she has led clinics, master classes, and artistic residencies worldwide.

Brackeen earned two NEA grants for commissions and performances and received a U.S. Department of State sponsorship for a tour of the Middle East and Europe in the mid-1980s. She continues to teach and tour internationally, and to date, she has played in 46 different countries.

– National Endowment for the Arts, www.arts.gov/honors/jazz/joanne-brackeen