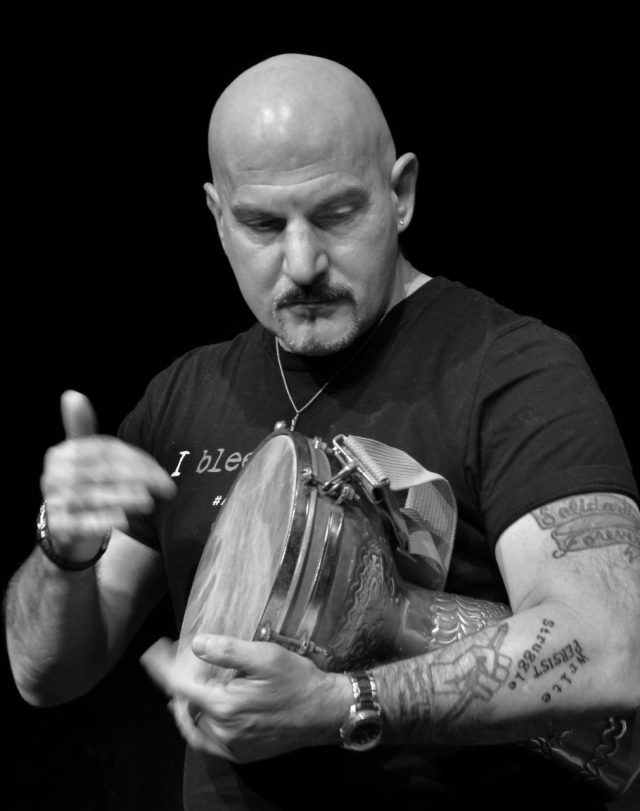 The path leading to Local 802 was inevitable. The roadway, set over rapid changes of meter and tempo, included a fortuitous second ending which leads to this movement — er, moment — in time. But it’s a moment in which I bring together my experience as labor movement veteran along with that as musician and a writer. At long last.

I’m a drummer and percussionist whose experience ranges from the jazz and new music avant garde to many brands of rock. Like most of you, I began playing as a child, taking lessons from a local teacher a few years later, though also engaged in creative writing long before that. And like most of you, I majored in music performance at college (James Preiss was my percussion teacher), and then earned an M.A. in music education, minoring in percussion performance. It’s no small irony that this was via a program coordinated between the City University of New York and Local 802. Coming from a union family with a grandfather who was an ILGWU business agent, I held membership in 802 at various points, recognizing the importance of collective strength, though I never sought the higher-status union gigs. The ‘downtown’ circle and its alternative spaces, improvisation, experimental sounds, and multi-disciplinary approach drew me in. I’ve yet to lose appreciation for that scene, and even decades later, am still very much akin to it.

Graduating in 1988, I quickly learned that budget cuts under the Reagan administration had decimated arts funding in schools. As teaching wasn’t a viable option, my activist heart led to social services, first NYC Child Welfare and then HIV/AIDS Services in a time when the virus was running rampant. Seeking to gain professional comprehension of this, I returned to school to study music therapy, earning certification in the subject, and employment at (the now defunct) Rivington House, and then the in-patient psychiatry unit of Brooklyn Methodist Hospital. Highly active in each union I’d been a part of for more than a decade, I decided to work full-time in the movement.

In 2002, my first job in the field was staff representative for AFSCME District Council 1707, a very progressive council where I primarily represented social service workers, handling grievances, preparing arbitration, engaging in internal organizing and communications as well as contract negotiations. And this job is also where I first encountered 802’s Recording Vice President Harvey Mars, who was serving as counsel there. I also earned organizing certification from AFSCME after embarking on a training by legendary organizer Jose La Luz.

Three years later, in 2005, I moved to the NYS Public Employees Federation where my “shops” were state correctional and psychiatric facilities, and various offices dotting the Hudson Valley, as far northwest as Fallsburg and Monticello. This offered a wider view of labor than I’d held prior, but, after five years I missed the city terribly, and was compelled to return to Brooklyn and District Council 1707, where holding a seat on the NYC Central Labor Council May Day Steering Committee was added to my duties. Finally, in 2012, I began working for the NYS Nurses Association, “repping” from Mt. Sinai to Staten Island University Hospital, Brooklyn Hospital to Riker’s Island. While I thrived in these positions, and understood healthcare facilities, I could never claim to be in my own element. Thus, when I heard from Harvey that Local 802’s organizing position was open, and following a meeting with he and Tino, I recognized where I needed to be. 802 is home.

The current status of the union is one flowing with possibilities as labor activism is on the rise in many sectors. Local 802, like all “entertainment” unions, has too often been seen as separate from much of the labor movement. But this is an error. The sooner the general public recognizes artists of every genre as workers — cultural workers — then fair compensation, safer working conditions, health benefits, pension, and the all-important voice on the job are within reach for musicians. The strength of the union lies within its membership — and examples of the street-heat in recent campaigns I’ve already witnessed strongly indicate that we are ready.

I began this essay by stating that I come to Local 802 as both an artist and a labor movement pro. My work as a writer has only increased with the passing years through poetry (see my poem “Blue” below), fiction and non-fiction, the latter primarily as an arts journalist for The NYC Jazz Record, The Wire, PleaseKillMe, The Nation, Z and others. As to the former, my latest book, “A Bleeding in Black Leather,” is due for August publication, and I’ve taken the opportunity to also release an album of the same name. It features my band, the Red Microphone, wonderfully talented musicians all, along with my spoken word poetry and a bit of percussion too. Though these efforts may be restricted by a certain indie fate, the immediacy of such creativity assures my understanding of your passion, of your drive for a life as a professional musician. I’m acutely aware of this, as urgently as I’ve fought for other workers to obtain respect on their jobs over a nearly 30-year period.

It’s time to drastically grow our union as we protect and fortify current contracts and internally organize members everywhere. The task may not be easy, but it’s surely one of necessity. And pride. Hey, we are musicians!

(c) 2019 by John Pietaro (published with permission of the author)

Blue. Not all blue, but blue.

Through a rayless, leaden room.

But the dark was,

The dark was always let in,

Drinking in the hue of

That piano, those chords those,

The harmony of a new day, blue way.

And sinewy, playing the music of lonesome:

He tears twilight into a thousand after-hours and

That lost moment when

Even the night fly lays still.

The sky, at its blackest, then,

can only blow purple.

And ponder the blue to come.

Watch from a safe distance as

The winds die off, the

Vacuum sets in and

Sleep off the residue of night.

Here in the sediment,

The sizzle and ping cast a

Sings out and new,

Pulling the gospel from his horn, but,

But its Coltrane that lights the night.

Sheets of beauty, sheets of

His pain for the rest to mourn.

Evans, that piano, those chords those,

The harmony of a new day, blue way.