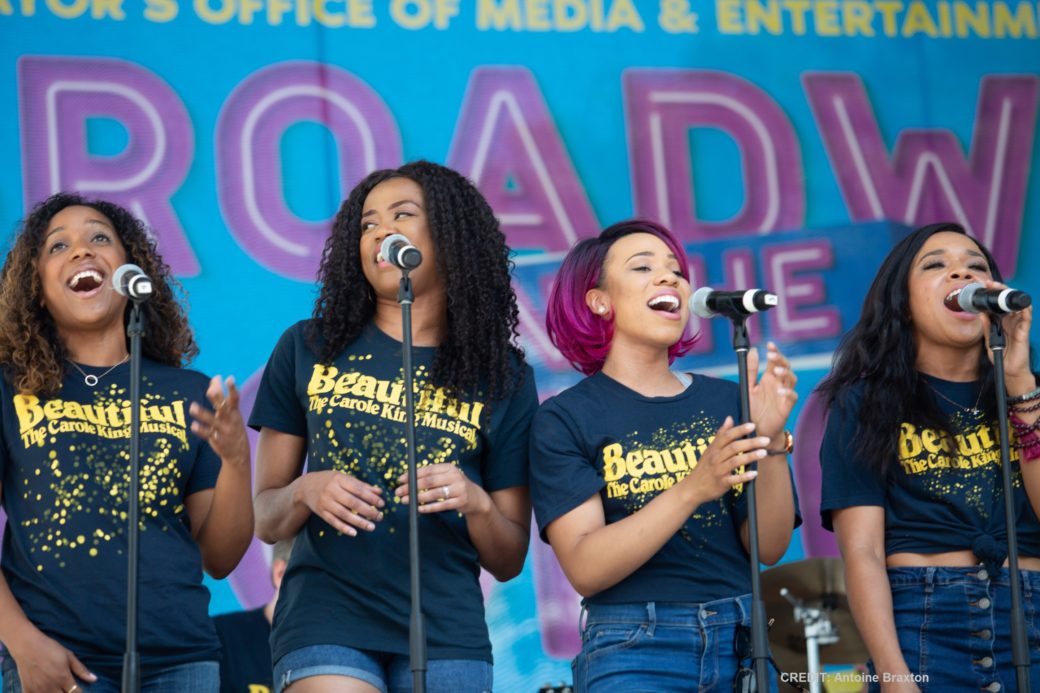 Broadway actors performed parts of “Beautiful: the Carole King Musical” during last year’s Broadway in the Boros series, sponsored by the Mayor’s Office of Media & Entertainment.

Hip hop. Punk rock. Salsa. New York City is the birthplace of some of the most influential movements in music history and home to topnotch talent in every genre. The music industry accounts for nearly 60,000 jobs and generates $21 billion in economic activity here in NYC.

Since 2016, when the NYC Mayor’s Office of Media & Entertainment portfolio expanded beyond film, TV and theatre to include music, Local 802 has been a key partner in our efforts to raise the visibility of NYC’s music industry. They worked with us to bring back the Grammy Awards for their 60th anniversary in 2018, and supported our first-ever economic impact study of the industry. They also partnered on the first New York Music Month and have continued to do so every year since.

We are pleased to launch a new original radio show, “CityFM,” that will explore NYC’s music culture, emerging artists and upcoming events around the city. “CityFM” will air Fridays at noon throughout the summer on WNYE 91.5 FM, the city’s official radio station.

Through a partnership with NYC Parks, we are presenting nine free concerts in the Bronx and Queens with artists including Bobby Sanabria, Disco Unlimited and Dirty Sock Funtime Band. We are also presenting Songathon, a songwriting competition that brings together talented songwriters who will have 24 hours to collaborate on a song that is then performed live for an audience who vote on their favorite.

On June 4, we will present a day-long conference on “Innovation at the Intersection of Music + Tech.” Produced in partnership with NY is Music and the NYU Steinhardt Music Business Program and sponsored by SoundExchange and media partner Billboard, the conference will feature speakers from Universal Music Group, Facebook, Nielsen, Billboard, Pandora, Soundcloud, Songtrust and Genius in what promises to be an engaging and informative series of conversations about the industry.

As in years past, we have partnered with Spaceworks to offer 2,300 hours of free rehearsal space for New York City-based musicians. We will also offer free workshops for musicians to sharpen their business skills. As part of the Resources for Musicians series, Local 802 will host a free workshop entitled “Make it Live: A Practical Approach to Getting Gigs in NYC and Touring” presented by Mehmet Dede from the live music club Drom. A full calendar of events and activities is available at NYMusicMonth.nyc.

Beyond New York Music Month, we will be reaching out to stakeholders in the industry to broaden our reach and understanding of the full spectrum of artists, venues, labels and affiliated services that make up the city’s music sector. Our primary goals will be to support the creative communities that nurture local talent throughout the five boroughs and identify opportunities to support industry growth and development. We look forward to engaging Local 802 in these conversations to ensure the sustainability and continued evolution of New York City’s unrivaled music scene.

As part of New York Music Month, Local 802 will host “Make it Live: A Practical Approach to Getting Gigs in NYC and Touring” on Tuesday, June 11 at 5:30 p.m. at Local 802. The session will highlight key subjects such as booking strategies, showcasing and pitching to presenters. Musicians will learn the building blocks to book local and regional dates and best practices for preparing for shows and maximizing turnout. This event is made free to the public by the NYC Mayor’s Office of Media and Entertainment. Visit www.nymusicmonth.nyc for more.