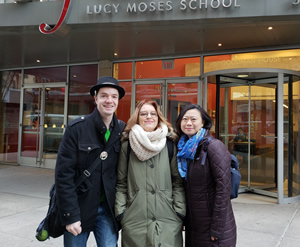 After 11 months of negotiation following a years-long process to have their union recognized, the 18 accompanists at the Kaufman Music Center have voted unanimously to ratify their first collective bargaining agreement. “Accompanists needed an identity and a voice,” said accompanist and negotiating committee member Wenhan Anderson.

Accompanists at Kaufman first decided in 2015 that they wanted the protections of a union contract for their work. Although some of the musicians first involved in those conversations had worked at Kaufman for decades, they were seeing a lot of turnover among their colleagues due to low wages, an unpredictable schedule, and feelings of disrespect.

Accompaniment work at Kaufman happens mostly in three separate divisions: Lucy Moses School, a community music school of classes and private lessons; Special Music School K-8; and Special Music High School. The two divisions of the Special Music School are a public/private partnership between the Kaufman Center and the New York Department of Education. They function as public schools and their designation is P.S. 859.

When a shift in pay occurred and accompanists were notified that they would only be paid 15 minutes per student at Special Music School recitals, unhappy accompanists started talking with their coworkers on the teaching faculty and having conversations with 802 organizing staff.

“When accompanists at Kaufman Center started sharing their stories, ‘second class’ was a recurrent theme,” said Aaron Butler. One common complaint was a difficulty in entering the school, since accompanists were not officially given school ID cards as the teaching faculty were. Another frustration was the inability to practice at school during breaks between accompanying assignments. “Just imagine having 30 minutes before rehearsing a Beethoven sonata and not being able to use the unlit – but locked – practice room in front of you!” Butler added.

The Kaufman Center and Local 802 already have a collective bargaining agreement that covers approximately 150 teaching faculty. Accompanists first hoped to join this bargaining unit and expand the existing CBA, which has been in place since 2003, but the Kaufman administration objected. Accompanists ultimately decided to go ahead and do it on their own, filing for a union election with the National Labor Relations Board in 2016 and bargaining their own separate agreement during  the bulk of 2018.

With this agreement, the accompanist staff improved several aspects of their pay and working conditions, including:

Although the process of getting a first contract was protracted and many obstacles from the employer came up, the organizing committee of accompanists were steadfast in their commitment to improve their work lives for themselves and future accompanists. Wenhan Anderson reflected, “Without the union, this contract just would not have happened – and I would’ve stopped working for Kaufman Center years ago.” Accompanists look forward to their new agreement finally being in place and their union recognized in full.

See accompanying story in this issue. For more information about Local 802’s organizing efforts, call (212) 245-4802 and ask for the Organizing Department.