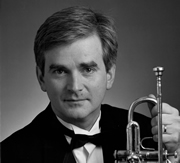 In a city full of excellent musicians, how does one stand apart as exceptional? A lot has to do with keeping a positive attitude, if you ask Don Batchelder, who holds the principal trumpet chair in the Stamford Symphony Orchestra, among others. He has been a Local 802 member since 1979.

Having just concluded a very difficult and protracted round of negotiations with that orchestra, Don – along with his colleagues on the orchestra committee – devoted an inordinate amount of his free time and effort to help bring those discussions to a successful conclusion.

Always maintaining a calm demeanor and focused vision throughout the negotiations, Don impressed everyone with his sense of fair play when it came to protecting the rights and dignity of his colleagues in the orchestra.

I spoke with Don between shows on a Wednesday afternoon to discuss music, teaching, and what inspires him to go above and beyond the call of duty.

Karen Fisher: Please tell me a little about your musical background.

Don Batchelder: I went to Juilliard straight out of high school. I studied with William Vacchiano and Mel Broiles. I started a master’s degree, and then I got a job in one of the Mexican orchestras, in Toluca. That was the time when Venezuela and Mexico had a lot of decently paying orchestras. And, boy, there were some great players there, too. I was in Toluca for three years, and then the peso crashed. I auditioned for a job in Korea, the KBS symphony. I was in Korea for part of a year. I started to get antsy, so I came back to NYC.

KF: What work are you doing now?

DB: I am principal trumpet in the NYC Opera Orchestra and I play first trumpet in the Stamford Symphony and the Westfield Symphony. I sub in the stage band at the Met and freelance doing various classical things and sub on Broadway. In addition, I’m teaching at Montclair State. I have been there 11 years and am also the brass coordinator so I have some administrative responsibilities as well.

KF: What made you get involved in the Westfield Symphony negotiation back in 1999?

DB: Well, they got a new conductor and we realized that there were about 8 or 10 people who had not gotten a hiring sheet. A lot of the orchestra members started wondering what we should do about it. Some were wondering if they should resign. I remember talking with a member of the NJ Symphony who said the best way to address this is with collective action. So, we got together with the new Organizing Department at Local 802 and they were really great.

KF: Was there a sense of outrage among the musicians?

DB: Oh, yeah. It happened in the middle of the summer so we realized a little slowly what was going on. I remember we met at someone’s apartment to talk about it and everybody was really outraged.

KF: What did you learn from that experience about the process of collective bargaining?

DB: It was a good experience but it was difficult. One story stands out. Obviously it was important for us on the committee to get job protection and we were finally getting down to where we were close to a deal. Lenny Liebowitz was the lead negotiator. It was getting late in the afternoon and I was the only committee member left at that particular time. Lenny said “I think we’ve got a deal” if we used this particular language, and I looked at it and it wasn’t what we were hoping for. So, we called a couple people on the phone and I remember telling him, “The committee is split on this.” The language wasn’t bad, but it we wanted something better. As soon as he heard that the committee was split, he said, “All right, I’m taking it off the table.” At the time, I didn’t know the dynamics of negotiating or who was in charge. But Lenny made it clear that even though he had the knowledge and the leadership, the rank and file committee had the power. What I learned was that the most important thing a committee can do is stay unified.

KF: We just wrapped the Stamford negotiation. What is your take on the differences between that negotiation and the Westfield negotiation?

DB: It was remarkably similar in that we had a management that felt that what we wanted was inappropriate. They felt that because they aren’t in New York, they should be able to pay a lower wage and have greater authority over the way the whole orchestra runs. The teamwork between 802 and the orchestra committee was really terrific. The people on the committee, everybody worked really hard. I really felt we got all the support we needed from the local.

KF: Why did you volunteer to serve on the Stamford Committee this time? When we first put the word out, I heard that you were not interested. What changed your mind?

DB: Speaking of things that were similar to the Westfield experience, about a year ago, a couple of our colleagues were dismissed from the orchestra and this made a lot of us so angry. We just didn’t see any need or reason for it. At that point, I felt as though I wanted to try to do something to influence the negotiation.

KF: What would you tell the musicians out there who are resistant to joining Local 802?

DB: Here’s the thing: I always remember that if it weren’t for the musicians’ union, I wouldn’t be making a living. And the adversarial bargaining process can be incredibly frustrating and sometimes maybe it is not even the right process, but without the strength of the union and the strength of collective action, I don’t see how musicians can have any counterweight at all to the market forces. Pick up the paper, and you see how difficult it is for regular working people with a skill to get paid appropriately for that skill.

KF: What do you think about the contractor system?

KF: How did that work out?

DB: Nobody got back to me at all! I’m sure I went in a big file! I started making finals – in orchestra auditions – when I was still at Juilliard. So, people knew me as someone who was making finals at NJ Symphony and at the Met and Philly Orchestra, so that was probably the biggest leg up. I went to Juilliard so I knew the people who were there, and the people who had been out working for a long time. I was relying on my connections with those people to help get me in on things.

KF: How is the business different now versus when you were starting out?

DB: I think people have to do a lot of different things to get by. I went for a very long time without ever having played a Broadway show. And I don’t know any classical players who refuse to play Broadway shows now. If they are lucky, they play some Broadway. It is certainly true that you need to get on the radar of the more successful players in town. Certainly if you are taking auditions and doing well, people are going to hear about you. If you have a little initiative or business ability, you can try to create a business opportunity and then call people and ask them to do the work. Even if it doesn’t pay great, like “I have this church gig; would you like to play?” That is a good way of getting somebody’s attention.

KF: What would be your advice to young people starting out in NYC?

DB: You want to get to know people who are about your age and are starting to succeed. Of course, the real way to succeed as a freelancer is that every time you show up, you sound good.

KF: In order to make a living, do you find that teaching has been a necessity?

DB: I love to teach and I am very fortunate to be in a position where I can teach very talented college students. Teaching jobs as good as the one in Montclair are very hard to come by, so I feel very grateful for that. When I was at Juilliard, I had no intention whatsoever of being a teacher. It never occurred to me, and there was almost an attitude of “if you don’t make it, then you can be a teacher.” At some point, I started to realize that teaching was one of the reasons that I’ve been put here.

KF: There is a lot of depressing news out there: the Detroit strike, and recently the Philadelphia and New Mexico Symphonies filing for bankruptcy. How has this news affected you personally and what do you advise your students regarding these events?

DB: I still think there is reason for hope even though I am not blind to how difficult and serious things are right now. Something that has been really valuable to me is my ability to stay positive. And that’s true as a musician. I’ve had a lot of amazing teachers, but I’ve learned from Arnold Jacobs and Vince Penzarella about how to continue to send positive musical messages even in adversity.

KF: What does that mean?

DB: The most important thing is the “song” you have in your head. So, you have a very detailed idea of how you want the music to sound. It’s not just about “oh, I’ve got to get all the notes,” it’s about hearing every nuance of your own part, and you understand how it fits with the entire orchestra, and you understand the style of that piece. As Vince Penzarella would say, the one who walks into the audition with the most instruments wins. So, if you can carry the whole orchestra in there, you’re in great shape. For one thing, that puts your mind 180 degrees opposite of “what if I miss this note?” That’s an example of positive thinking that musicians really need.

KF: What else would you like your colleagues to know?

DB: Stay in love with the music that you’re playing, and purposefully make positive statements to yourself when you practice.