As musician/activist in 2020, I find myself celebrating the 50th anniversary of Earth Day and hopeful for the prospect of change through the November elections. In past issues of Allegro, I’ve written about my involvement in the climate movement with the group 350.org and what we can do as individuals to reduce our carbon footprint. This time, I’d like to “zoom out” and talk about our collective political power.

The establishment of Earth Day on April 22, 1970 was one year after the Cuyahoga River CAUGHT ON FIRE (!), which provided a much needed wake-up call to act on behalf of the health of the planet. The effort was spearheaded by two senators — Republican Pete McCloskey (Republican) and Democrat Gaylord Nelson — and inspired by the effectiveness of the student anti-war movement of 1960s. The establishment of Earth Day led to the creation of the Environmental Protection Agency and the passage of the Clean Air Act, Clean Water Act and Endangered Species Act. All of this was done to counteract pollution, which now seems like an almost quaint problem compared to the threat posed today by global climate change.

Fast forward 50 years later. In the interests of cronyism and profit, the president of the United States has rolled back or destroyed much of this effort to maintain a sustainable world. President Trump has also dealt a heavy blow to the international climate movement by announcing that the U.S. will withdraw from the 2015 Paris Climate Accords. At the risk of stating the obvious, a key goal of the environmental movement is voting Trump out of office and supporting a candidate with a clear vision of how to transition away from fossil fuels and move this country quickly towards common sense, sustainable energy policies, such as the Green New Deal.

With President Trump talking about bringing back coal mining jobs, drilling for oil in our national parks and distributing paper towels as a solution to help hurricane victims, it was clear that the environmental movement was going to have to look elsewhere for sane energy policies. The movement turned to state and local leaders to take action. Governor Cuomo has acted as a bulwark against Trump’s actions by banning fracking and offshore drilling and announcing New York State’s resolve to honor the Paris Climate Accords. Additionally, New York State recently passed the Climate and Community Protection Act, making our state a leader in clean energy policy. This bill had failed several times in the state senate, and its passage only became a possibility after the Democrats won a majority in Albany in 2018. So while our federal politicians get most of the attention, it is in our best interest to keep the pressure on our local leaders as well. How many people reading this article know who their state senator or city council member is — and how they vote? I didn’t know myself until getting involved as an activist. (There are plenty of online tools to find a list of all of your representatives., including federal, state and local. One good site is at www.commoncause.org/find-your-representative.)

I started to become politically aware (and angry) during the George W. Bush years, and after Barack Obama was elected, I basically checked out, trusting that he would make decisions that I agreed with, so there was no need to keep tabs on his policies. This was, of course, a mistake. Our leaders need to know that we’re watching them so that they take our opinions into account. Getting angry and complaining about our politicians doesn’t accomplish anything. Communicating with and even getting to know your local politicians puts you and your issue on their radar. After all, they need our votes!

So why should we care about climate change as musicians? Because we’re also human beings. Our planet is in trouble and the clock is ticking. Political pressure is necessary to get our leaders to act. As musicians, we’re in the emotion communication business. Many musicians are activists who use their music to get their message across in a way that mere words cannot. Woody Guthrie and Pete Seeger are two of our past elders who showed us how to do it. We can’t afford to be silent in this struggle. Let’s get active and make some noise! 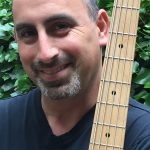 Marc Schmied, a member of Local 802 since 1996, is a bassist, wannabe comedian and environmental activist with 350Brooklyn.org. The opinions of writers in Allegro do not necessarily reflect the opinions of the staff, members or officers of Local 802. To submit a story to Allegro, send an e-mail to Allegro@Local802afm.org.