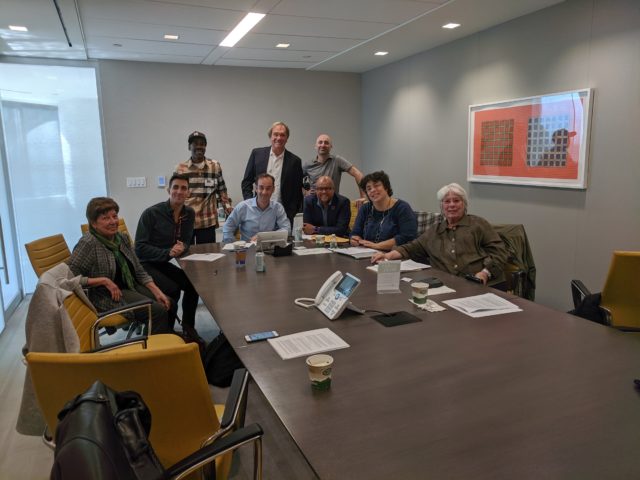 MAKING NIGHTLIFE BETTER FOR MUSICIANS: Local 802 member Alvester Garnett (wearing glasses, seated at end of table) serves on the NYC Nightlife Advisory Board, which advises the mayor and City Council about issues affecting musicians and other nightlife workers.

The NYC Nightlife Advisory Board is an all-volunteer, 14-member independent body that advises the mayor and the City Council on issues affecting the nightlife industry and ways to improve regulations and policies that impact nightlife establishments. Alvester Garnett serves as the Local 802 representative to the Nightlife Advisory Board, in addition to his work as the chair of 802’s Jazz Committee. Below, Alvester tells us how he is using his time on the board to help his fellow musicians.

As I serve on the NYC Nightlife Advisory Board, my main priority is recommending that we eliminate pay-to-play policies that undermine the work and value of musicians. Every musician knows what pay-to-play is: it’s basically any kind of gig where there’s no guaranteed wage. Maybe you make some money if the venue “passes the hat” and asks for donations for the musicians. But after taking into account the costs of transportation, food and paying any backup musicians, the leader almost always ends up losing money on these gigs, which is why we call it pay-to-play.

How to address the issue of pay-to-play can be a deceptively convoluted endeavor. Musicians who are new on the scene or lack a strong audience base may see pay-to-play as an opportunity to gain exposure or a way to work on their tunes in front of an audience. And many venues wouldn’t bother hosting live music at all if it wasn’t free; they’re well aware of the current status of supply and demand for musicians. On the musicians’ side, the desire to be an artist and the desire to be a professional can be in conflict. Venues often will take advantage of the decisions we’re forced to make.

One reason that we play music is because it’s in our soul to express our art, and this means that sometimes we’ll play for little or nothing. (And this is an even easier decision for musicians who have an alternative source of income.) But the adverse effect is what this does to those who primarily make a living from performing.

This year the minimum wage in New York City was raised to $15 per hour. Many restaurant owners insisted that the raise would hurt the industry. But lo and behold, the city has had a boost of income in restaurants. It’s illegal not to pay restaurant workers; why is it legal not to pay musicians? We must get rid of pay-to-play.

How do we propel venues to adapt fairer standards? Besides the usual political or legal tactics, another idea we’re thinking of is a “seal of approval” for venues that pay musicians a guaranteed living wage.

So what are the meetings of the NYC Nightlife Advisory Board actually like? We typically meet at the David N. Dinkins Municipal Building. We read current NYC regulations about nightlife and speak about what we want to see changed. At our most recent meeting, we identified our top 15 objectives.

We also seek out opinions from outside organizations. We recently heard from the NYC Artist Coalition, which gave us a list of venues that receive tax breaks or grants from the city yet pay musicians marginal wages at the same time. This list of venues was shocking to me and was a reminder that musicians are often at the bottom of the list when it comes to how venues spend their money. Why does a venue deserve a grant or tax break if it’s going to treat its musicians poorly?

And then there are some citizens who oppose nightlife, almost militantly. For example, nightlife in the Lower East Side is always growing, and there are residents in that area who don’t want loud music in their backyard. Even though we, as a musicians’ union, want live music to flourish everywhere, we have to be sensitive and open to compromise. For instance, if there was a recommendation that required new nightlife venues to install soundproofing, I would vote yes without a second thought.

Our voice on the Nightlife Advisory Board is important for musicians — and it also expresses the outreach and commitment of Local 802. We’re building stronger relationships with the city and becoming part of the nightlife discussion from the inside, which means we’re becoming part of the solution. Overall, this is a positive initiative and I’m proud to be a part of it.

Musicians who have any questions about the NYC Nightlife Advisory Board — or who have any ideas or contributions — are welcome to e-mail me at AlvesterGarnett@gmail.com.