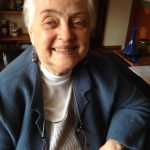 Marilyn K. Smith, a violinist and teacher, and a member of Local 802 since 1955, passed away on April 25, 2020. Throughout her long career as a teacher and performer she touched the lives of hundreds of students, many of whom have pursued music careers.

Mrs. Smith was born in Chicago, IL, in 1929, growing up in various suburbs of the Chicago metropolitan area. She attended Roosevelt University, where she received degrees in Performance and Education in 1952 and 1954, respectively, and served as the Principal Second Violin of the Chicago Civic Orchestra. In 1949 she married Sidney Stockton Smith, who was both an operatic tenor and audio engineer. Following their graduation from Roosevelt University, they moved to the NYC area to pursue their individual careers, settling down in Sea Cliff, Long Island and raising three daughters.

A notable teacher, both privately and as a public-school instructor, Mrs. Smith taught for 30 years in the North Shore School District as an instructor of stringed instruments in the elementary schools. After receiving her Masters Degree in Education from C.W. Post College in 1986 and her Suzuki teaching certification from the School for Strings in NYC with Louise Behrend, she founded and co-directed the C.W. Post Extension’s Suzuki Program from 1991-2014 with violinist, Doris Rothenberg. Throughout the years Smith also had a notable studio of private violin students, many of whom furthered their education at major music schools, including Julliard, Manhattan School of Music, Yale University, and the Berkeley School of Music, to name a few.

In 2015 Mrs. Smith relocated to Connecticut and continued to play and coach in a multigenerational community orchestra with her daughter and two grandchildren through the Community Music School of Essex until her death. Smith is survived by her three daughters, who are all professional musicians (Jennifer, viola, Great Falls, MT; Patricia, cello, Guilford, CT; Laura, violin, New York, NY), two sons-in-law, and three grandchildren.

A memorial concert in celebration of Mrs. Smith’s life will be held at a future date. Condolences to the family may be sent to marilynsmith413@gmail.com. Donations in her memory may be made to the Chris Herrle Scholarship Fund at the Community Music School of Essex, CT or a music organization of choice.