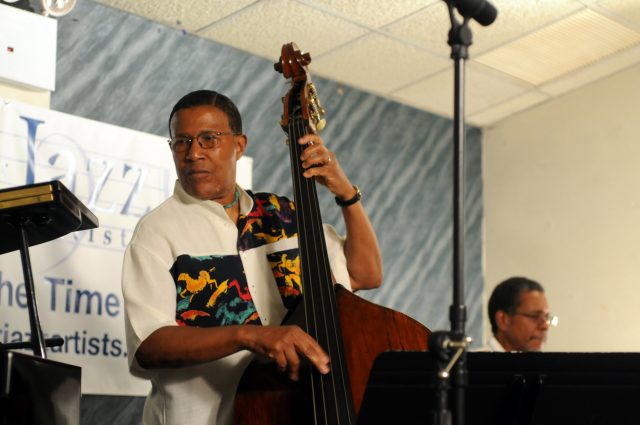 Mentorship is a vital tradition in music, especially in jazz. An excellent role model was the late Bob Cranshaw, whose life I am researching for my graduate thesis. I want to share a little bit about what I’ve learned and how mentorship played a big part in his life.

Those who knew and worked with Cranshaw had the utmost respect and admiration for him. Because he was so extraordinary, it is tempting to think of him as a singular, monumental figure. Though he was one of a kind, he wasn’t always a giant of music. Cranshaw was once a young musician trying to make it just like everyone else, and mentorship played an instrumental role in his development and eventual success. Cranshaw’s mentor was another great bassist, the late Milt Hinton. The tradition of mentorship can be traced from Hinton to Cranshaw and to the younger musicians whom Cranshaw mentored in turn.

Having a role model and a guide in music is essential and Hinton had important mentors, too. He recounted his mentor relationship in his autobiography. When Hinton first joined the musicians’ union in Chicago, there were separate unions for blacks (Local 208) and whites (Local 10), which are now unified into one entity. Hinton wrote:

In those days, the union would let you make your dues payments in installments. As I remember, it cost $20 to join. They’d let you put $5 down and pay the balance within a year. Once I filed my application I’d spend my free time at the local…The second floor had a pool table and a separate room for playing cards…After hanging around a few months I got to know Walter Wright.

Hinton was eager to learn from established musicians and made a point of building a relationship with Wright.

He was an older, dignified gentleman who was a great bass playe…by the time I got to know him he was running the poker and pool concession at the union… Mr. Wright was kind to me. Maybe it was because I sought him out. In those days I was eager to learn anything I could about bass and I always found him helpful.

What Hinton learned from Wright was more than just musical. He learned the importance of passing on knowledge to the next generation.

Back to Bob Cranshaw. Early in Cranshaw’s tenure in New York, he met Hinton, who gave generously of both resources and time, in order to help Cranshaw get established. Cranshaw remembers:

I had been in New York maybe a few months, and I was on 48th and Broadway. I was on my way to rehearsal with somebody and I had a bag on my bass that was raggedy and about to fall off, but I couldn’t afford anything else. I was walking down to the rehearsal and this gentleman dressed with a tie stopped me on the street. He said, “Hi. What’s your name?” I said, “Bob Cranshaw.” He said, “Are you a professional bassist?” I said, “Yes, sir.” He said, “I’m Milt Hinton.” I said, “Oh, shit.” It was like meeting God. Here’s my mentor…He took me into Manny’s and he bought me a bass case on the spot…He said as a professional, I couldn’t be walking around with a bag like that.

This selfless act made an indelible impression; Cranshaw often referred to any act of generosity toward younger musicians as “The Hinton Method.” Cranshaw modeled himself on Hinton both musically and professionally. Cranshaw remembers:

I would just go to [a recording date] and I would sit on the side. I didn’t want to disturb anybody, but just to watch [Milt Hinton]. When The Judge [Hinton] walked into the room, you could feel the energy. Everybody was talking. That was the kind of guy he was. That was the life. My biggest, my most wonderful influence, was watching The Judge.

Cranshaw in turn mentored numerous musicians throughout his life. One notable example is Tom Barney, a member of Local 802 and the bassist for the “Lion King” on Broadway. Cranshaw made Barney’s success a top priority and seeing him achieve his potential meant the world to Cranshaw. “When Tom got it all together…I thought, ‘Hell, I can go sell insurance now,” said Cranshaw. “I felt total fulfillment as a player.’”

Barney felt equal pride from their relationship. “The life lessons Bob taught me have been as important to my career as the musical lessons,” he said. Barney still uses Cranshaw’s lessons today. “For me, laying it down is #1 and everything else comes second.”

These examples of mentorship demonstrate the possibilities that can come from investment of time and energy from one to another. They also demonstrate that effort is required on both sides; both mentor and protégé must actively pursue and engage in such relationships in order to perpetuate the cycle.

Cranshaw’s (and Hinton’s) legacy at Local 802 looms large, and the tradition of intergenerational learning is still present at Local 802 in the continuing Jazz Mentors series, which connects young musicians with established professionals though the union. Cranshaw’s philosophy can be traced back to lessons he learned directly from his mentor, Milt Hinton – and Hinton’s mentor Walter Wright before him. Through many years of service at Local 802, Cranshaw considered all of the other musicians family, and made serving them his highest priority. His generosity, spirit and warmth extended to all who knew him. “I’ve done very well by the union…and so I want to make sure that others know how to get involved,” Cranshaw said to Local 802 Principal Business Rep Todd Weeks, who worked closely with Cranshaw.

We should all follow Cranshaw’s example and pay forward the kindnesses that others have granted us in order to keep the traditions of music and community strong.

For sources I used in this article, plus some more suggested reading, e-mail me at sethlewisbass@gmail.com. My thesis will be called “We, Not Me: The Musical Life of Bob Cranshaw.”