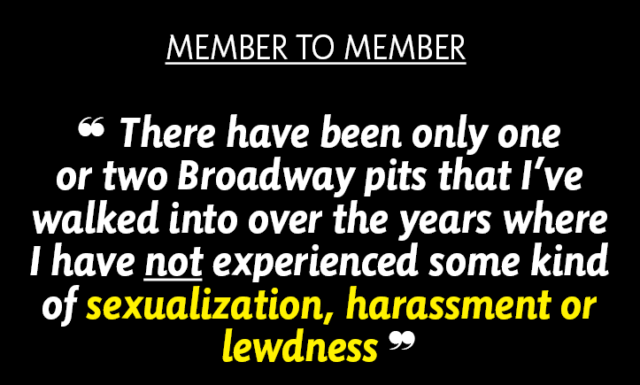 The following story was sent to Local 802 anonymously.

I have been heartened recently by what feels like a shift in our Broadway musician industry towards recognizing the problem of systemic inequality and making steps toward solutions. It is less heartening to hear other voices shouting back in favor of the status quo when someone dares to question power structures.

We need to acknowledge how many people in our community are silently watching to see how the industry will respond to behavior that either was or could lead to an abuse of power. It disturbs me that the primary response so far has seemed to be: “But they’re so talented.” Those who may have had anything to say about past experiences of discrimination are convinced by these kinds of reactions that they should continue to say nothing. Talent will be defended above all.

We’ve been conditioned to believe that a scarcity of talent in our community necessitates us giving free passes on bad behavior in order to maintain a high quality product. But in reality, a perceived scarcity of talent is untrue. Far too many talented people are being pushed out of rooms or choosing to take themselves out of situations where they are being subjected to abuses of power. This is blocking our way forward and weakening us as an industry.

There are two ways I have seen this manifest. One, the harasser in question is the person in power. Two, the harasser has been so widely celebrated and collaborated with by those in power that it becomes clear that kind of behavior is acceptable.

At times it seems that in service of the status quo, few are willing to acknowledge that anyone with talent can simultaneously be someone of reprehensible character or create uncomfortable working conditions for others. But honestly, there have been only one or two Broadway pits that I’ve walked into over the years where I have not experienced some kind of sexualization, harassment or lewdness. The perpetrators of such behavior continue to work and be honored for their musical capabilities.

Because of these experiences, I have more often chosen to work on new musicals and hire musicians who I know will not treat me or their other colleagues that way. There are many others taking similar paths, and I look forward to the next 20 years as we all gain in hiring power and support each other in working toward the goal of a safe, diverse and accepting workplace. In the meantime, we must all listen better to the voices with the least amplification, the voices that may speak from the bottom of a disproportionate power structure, the voices that can maybe only manage a whisper in response to inequality. If not because it’s the right thing to do, then perhaps because those voices represent the next generation of people determining who gets to keep working in this industry.

Local 802 welcomes submissions from members. Send an e-mail to Allegro@Local802afm.org.