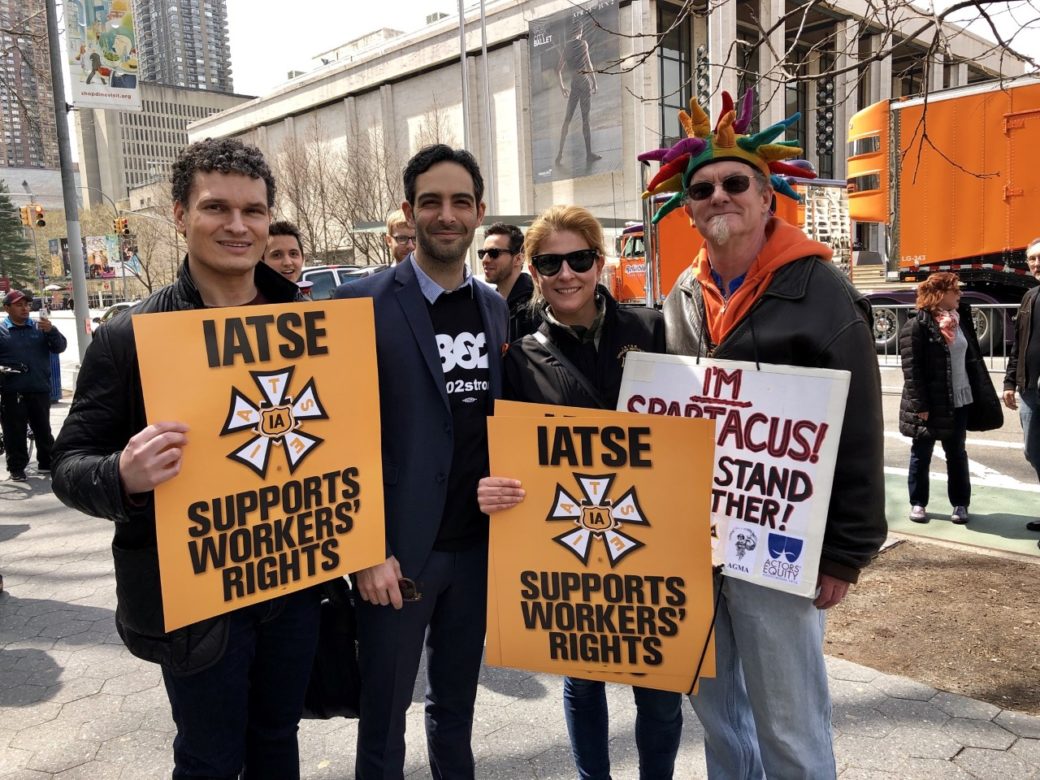 Hey, union musicians! It’s time to get to know one of your sibling unions! We are the Theatrical Wardrobe Union (IATSE Local 764), and we’re celebrating our 100th anniversary this year. We’re the oldest wardrobe union in the world and we represent over 1,600 workers who care for costumes on all kinds of productions in the New York City area. We also represent the guardians who take care of Broadway’s child actors. Our work takes place on movie and TV sets, in costume shops, on Broadway, and at many other live theatrical events.

Turning 100 is an impressive accomplishment, and Local 764’s history is no exception to that rule. From our earliest days, Local 764 has valued solidarity, inclusion, diversity, growth and strength.

On July 22, 1919, the American Federation of Labor granted a charter to the Theatrical Wardrobe Attendants Union. Legendary labor leader Samuel Gompers, first president of the AFL, signed the charter, which is still hanging on the wall of the Local 764 office on West 45th Street. Later that year, the new union had an information meeting rallying the wardrobe workers to come together in solidarity.

At that time, our union had no contracts and could not really bargain. But even from the beginning, we shared similar struggles with the musicians (who were fighting for representation), the actors (who had recently formed their own union) and the stagehands (who had created IATSE in 1893). Theatrical labor activism was on the move.

Local 764’s first contract came in 1929 and was with the Metropolitan Opera. It was two pages long, and the highest wages were paid to tailors in the costume shop: $48.75 per week. The letterhead upon which the contract is written shows that our union’s executive board was made up of all women at that time!

In 1942, our union joined IATSE and officially became IATSE Local 764. In joining IATSE, the bargaining power and solidarity power of Local 764 increased exponentially.

The local continued to grow, particularly as film production became more common after World War II. Our historical records from the 1950s and 60s show new contracts and improved conditions. Our pension fund was established in 1962. In 1982, the word “attendant” was dropped from our local’s name, and IATSE issued a new charter that named us “Theatrical Wardrobe Union, Local 764 of the IATSE.”

Local 15 of the National Association of Broadcast Employees & Technicians merged with IATSE in 1998, and those motion picture costumers became part of our Local 764.

In 2010, the Broadway Child Actor Guardians organized and were welcomed by Local 764 as members.

Our membership has grown to over 1,600 members, and our contracts are some of the strongest in the country.

Our membership is diverse and energetic. Our union prides itself on excellent social media outreach, top education programs, and an executive board that prioritizes showing up at events supporting IATSE and other NYC unions, including Local 802.

At the heart of all Local 764’s activities are its members and their commitment,  especially in the areas of internal and external organizing, activism, collective bargaining and politics.

Local 764 members have participated in lobbying trips to Washington, D.C. to push for more funding for the NEA. We’ve also lobbied both New York City and New York State for film and TV tax credits. We’ve coordinated with Manhattan Borough President Gale Brewer to preserve the NYC Garment Center, whose close proximity to the Theatre District is important for wardrobe work. In 2017, we worked with the NYC Central Labor Council and our sibling unions to defeat a ballot proposal for a state constitutional convention that could have been disastrous to union workers. We hold voter registration drives, food drives and an annual toy drive to benefit families dealing with HIV/AIDS. We participate in marches and rallies such as the Women’s March, the World Pride March, the annual Labor Day Parade and the March for Our Lives (which promotes gun safety). We sponsor an annual quilt raffle, now in its 18th year, which has raised almost $150,000 for the IATSE Political Action Committee.

From the earliest known call to “all workers” in 1919 until today, our local’s philosophy is to include as many workers as possible and involve the membership in their own representation. We want our workers to report on workplace issues and serve on negotiating committees. Education and training are highly valued. Organizing successes at recent Off Broadway productions of “Fiddler on the Roof in Yiddish,” “Jersey Boys” and “Rock of Ages” as well as organizing wins at Jazz at Lincoln Center and the New York City Ballet costume shop testify to a commitment of continuous growth.

Quite often in our workplaces, the wardrobe crew and our Local 802 musician allies seem remote from each other. Everyone has a job to do, and busy show schedules do not always permit lots of interaction between departments. But our work and our history connect us. Musicians and wardrobe workers are connected to each other by our workplaces and our shared love of creativity and live shows.  Solidarity is like a heartbeat – sometimes taken for granted, but always present. We will be there for each other when needed. We know that every union ultimately has the same goals – to empower workers and fight for social justice  – and we stick together.

You can hear some of Local 764’s workers telling about our craft in our anniversary video, which can be found at www.ia764.org/member-news/local-764-anniversary-video