This marked the first time that a major company in residence at the David H. Koch Theater – formerly the New York State Theater – did not employ live musicians.

How did this come about?

But since the opera left the theatre earlier this year, the ballet has been scrambling to find co-tenants or subtenants.

One way the City Ballet has done this is to rent the space to dance companies. The problem is that almost all of these companies are dancing to taped music.

While this may be normal at other venues and certainly in other areas of the country, Local 802 feels this is unacceptable at Lincoln Center.

Lincoln Center’s reputation as one of the most venerable presenters of the performing arts in the country demands that it continue to offer the highest-level arts experience.

Ticket holders attending events there have the right to see and hear performances that combine all the qualities integral to the art form they have paid to attend.

Local 802’s efforts to engage Paul Taylor about this issue were rebuffed. Many members will recall that this is not the first time that this company has run afoul of the musicians’ union.

In 1997, the company tried to replace its union orchestra with a non-union chamber orchestra.

Then, too, our efforts to work with Paul Taylor were met with an intransigence that indicated that the company did not want to resolve the issue.

Since then, in its annual seasons at City Center, the company has performed to taped music, with only occasional orchestra appearances at gala performances or premieres.

This year there will be no live music at all.

Local 802 believes that the responsibility for this outrageous situation lies not just with Paul Taylor. We feel it also lies with the New York City Ballet (as the leaseholder of the Koch Theater) and Lincoln Center (the owner).

With this in mind, President Gagliardi sent a letter in early March to the trustees of Lincoln Center and the board of directors of the New York City Ballet expressing the union’s deep disappointment and displeasure.

Then, a few days later, over 40 musicians and supporters gathered in front of the steps of Lincoln Center to distribute informational leaflets to audience members attending Paul Taylor’ inaugural performance at the Koch Theater.

The demonstration was a tremendous success, drawing press coverage from media outlets around the world.

The musicians who participated in the demonstration found that concertgoers were outraged to learn that they were paying premium ticket prices for a performance that did not include live music. 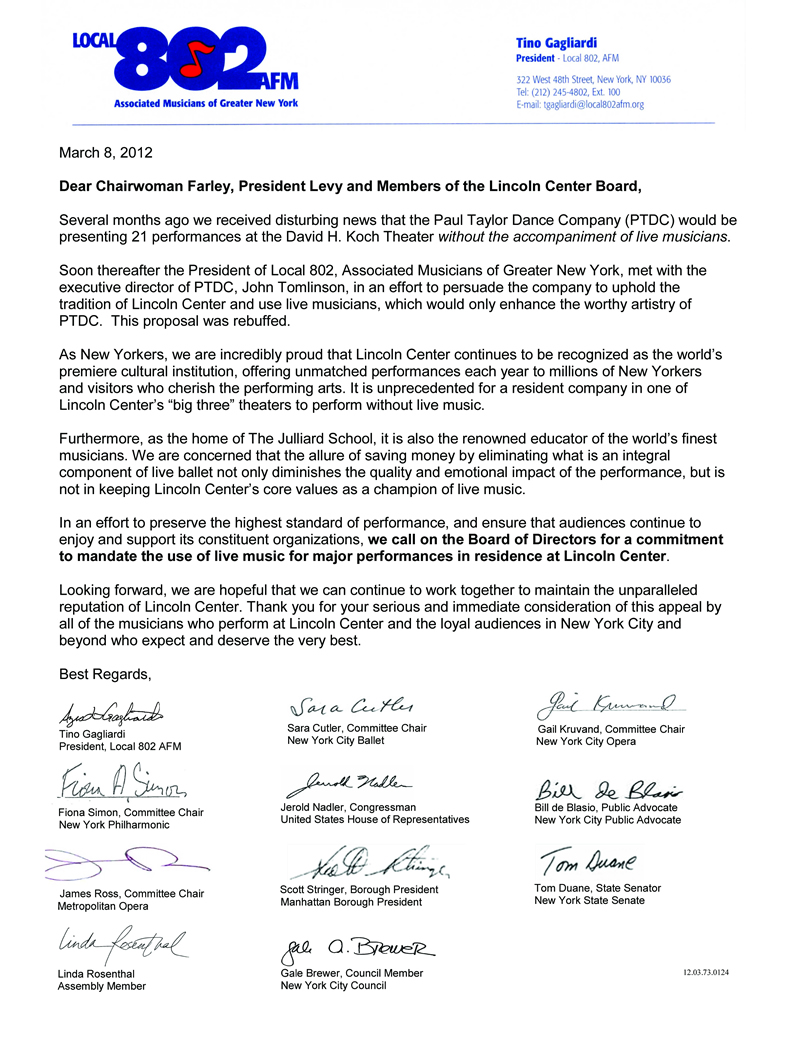