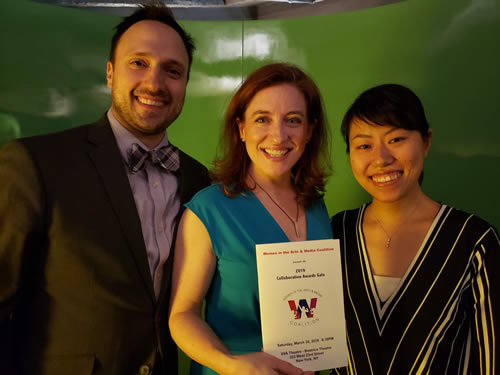 Local 802 member Ayumi Okada (far right), Christian Duhamel and Charissa Bertels are working on a new musical called “The Uncivil Ones,” which just won an award from the Women in the Arts and Media Coalition.

Local 802 member is developing a new musical featuring forgotten stories of the Civil War, with a female, trans and non-binary cast

Ayumi Okada, a member of Local 802 since 2012, is currently developing a musical called “The Uncivil Ones” with Christian Duhamel and Charissa Bertels, which just won an award from the Women in the Arts and Media Coalition. The show features unsung heroines of the Civil War – such as Dr. Mary Walker (the only female Congressional Medal of Honor recipient) and Mary Elizabeth Bowser (a freed slave turned Union spy) – told by a cast of 10 female, trans and non-binary performers.

It all started in Japan. In 2004, I was a music education major at the Kyoto University of Education, writing my first musical with my friends. We went to see the Japanese premiere of “Phantom” by Maury Yeston at the Takarazuka Grand Theater, a 2,550-seat venue. Initially, I was hoping to get inspiration for our show, but “Phantom” actually ended up changing my life.

When I heard Christine sing “Home,” I was struck by the idea that you’d feel at home when you get to the place you’re supposed to be. I wanted to believe that was possible for myself as well, and the music told me that it was. My heart broke when Erik finally opened up to Christine by showing his face, and broke again when she rejected him. I cried incessantly when Carriere and Erik finally connected with each other as father and son. At that time, I was personally going through a tough time; I had just lost one of my brothers unexpectedly and was still trying to make sense of it. By following Erik through his journey, I somehow felt my brother’s soul was honored, and my spirit was lifted up. I was convinced I had finally found something I really wanted to do with my life: write musicals!

But in Japan at that time, I could not find a community of musical theatre writers, let alone workshops or programs to learn the craft. After finding out there were also no openings for a music assistant position at a major theatre company, the only other options I could see were to give up music and seek a teaching job, or take a chance and study abroad in the United States. I knew my choice was the latter, but it took a few years to figure out how to make it happen. I eventually decided to apply to the Mannes School of Music  and was fortunate to be accepted as a composition major in 2009.

My first years in the U.S. went by so fast. I took many classes at Mannes, including composition and English. Everything was so new to me, and often I was overwhelmed. But I pushed through, and was able to earn my Master of Music degree in only three years. Along the way, I won all four composition awards offered by the school at that time, including the first prize in the Jean Schneider Goberman Competition. My winning piece was granted a debut performance at the Weill Recital Hall at Carnegie Hall.

I was proud of these accomplishments that I didn’t think I could ever reach, but at the same time, I felt I was still in the same situation I was in when I left Japan. I started actively seeking a way to get into the musical theatre community in New York. I first learned about the BMI Lehman Engel Musical Theatre Workshop exactly one week after its application was due. While I was devastated at having to wait an entire year for the next application cycle, I’m ultimately glad for the delay: my collaborator, Christian Duhamel, and I were accepted into the same year.

After collaborating on several projects with Christian, he introduced me to Charissa Bertels, a Broadway actor and champion of new musicals. They had an idea for a new project about the American Civil War, and thought I might be a good fit to write the score. I was so excited for the opportunity, but also a bit terrified inside. Would I be able to write a bluegrass musical about the American Civil War? Although I had several experiences as a music director and assistant in various productions by then, I was just starting out as a musical theatre composer. At that point, I had been working with Christian for almost four years, and his recommendation brought me to the table for this project. I wanted to live up to his trust. So, I closely analyzed several bluegrass masterpieces before we wrote our trial songs, and throughout the writing process, Christian helped coach me on the musical style. In the end, I relied on my musical instinct for the story and Christian’s lyrics. I was so relieved and grateful when Charissa gave us the go-ahead after listening to our initial songs. We were officially a team.

I first learned how to collaborate through the BMI Workshop, and I’m learning more about it from Christian and Charissa every day. I have learned to trust myself as they trust me. As long as I put my best work on the table, it is ready for the magic of collaboration. I don’t have to be perfect. I also believe that our collaboration is not addition, but multiplication. If I challenge myself to grow as a writer, I know our team can and will go even further.

This year, in late March, Charissa and I were honored with a Special Mention at the 2019 Women in the Arts and Media Coalition Collaboration Awards for our work on our project, which we’ve titled “The Uncivil Ones.” The night of the gala, held at the SVA Theater in Chelsea, was pure joy. Seeing a theatre full of women who are actively collaborating and creating important new works was so thrilling. Having created our piece to put a spotlight on minority voices in the culture – both through purposeful casting and through examining the role gender plays in society – we felt especially honored to be celebrated by the women in attendance.

One of the best moments of my life happened that evening when we went onstage to give a brief acceptance speech. We had coordinated our speech beforehand, and I thought I knew what Charissa was going to say, but she surprised me by going out of her way at the end of her speech to warmly acknowledge me as her collaborator. I was so moved and wanted to embrace the moment forever, but I still had to pull it together to deliver my half of our speech!

In that moment I saw how multiculturalism functions in our collaboration. The audience that night seemed to be mostly American so I was absolutely a minority in terms of race. I can only imagine the surprise the audience might have felt when they saw me going up on stage and found out that I’m the composer for a show about the American Civil War. But then Charissa gracefully built a cultural bridge to the audience, between the talented women in the room and me. I was a Japanese person among Americans, but I was also a woman amongst other women. Simultaneously, she strengthened the bridge connecting our team as well. I was truly grateful. I was where I was supposed to be at last.

As a Japanese-born female composer, I am passionate about telling the story of our show because I relate to our characters as a woman who has felt oppressed by society from being/becoming who we truly are. I also believe American musical theatre is an inclusive art form that can reach anyone from any culture. As long as the writer, regardless of where they are from, has learned the craft well, and is humble and sincere in their writing, they have the power to change others as “Phantom” changed me. I’d like to be one of those writers.

Recently, in the BMI Workshop, we presented our songs in front of Maury Yeston himself. I had signed up for our presentation slot a month before, not knowing who was going to moderate the session that day. When I learned it would be him, I was so excited and a bit terrified. What if I disappointed him? But on that day, with my collaborators by my side, I felt confident enough to walk up to him, shake his hand, and introduce myself before our presentation. After listening to our songs, he gave us some valuable feedback and advice. Then he ended his critique by saying, “If you really do it, then invite me. I’d like to hear it.”

Meeting Mr. Yeston and getting his positive words on our work felt like I had come full circle from that pivotal moment in Japan, and brought new inspiration for the next steps as we continue to develop “The Uncivil Ones.” I look forward to inviting Maury to a future production featuring my union brothers and sisters in the orchestra pit under a union contract. When that happens, I hope you will all stop by to say hello!

Members of Local 802 are invited to contribute stories to Allegro, which we publish in our MEMBER TO MEMBER column.