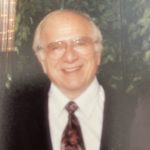 Peter Paul Pane, 94, a clarinet and saxophone player, and a member of Local 802 for almost 60 years, died on April 12. Though he was born in New York City to Italian immigrants, he grew up in the town of Dunmore, Pa., located near Scranton, Pa. He was brought up in a home where music was an everyday experience as his father was both a mandolin and cornet player. At age ten, Mr. Pane began studying the alto sax and the clarinet with excellent teachers at a music store in Scranton.

In 1944 he successfully auditioned for the Navy School of Music on both instruments and found himself at boot camp in Maryland. Playing in the Navy concert band at the end of 1944, Mr. Pane was deployed to the U.S.S. New York, a World War I vintage battleship. During wartime, the 22 musicians on board played both concert and swing band repertoire and were expected to give regular concerts to entertain the crew when the battleship was not under fire. The ship’s first offensive action in the Pacific in mid-February 1945 was at the island of Iwo Jima. Mr. Pane was assigned to pass ammunition to the actual gunner who loaded the gun, the second largest aboard the ship.

At the finish of his deployment and with the help of the G.I. Bill, Mr. Pane earned a degree at Juilliard. There he enjoyed playing in a classical woodwind quintet and playing with the National Orchestral Association Orchestra, conducted by Leon Barzin, which performed at Carnegie Hall. After graduation in 1950, he played in several swing bands, including the Sammy Kaye Band. In the early 50s, he enrolled in Columbia and graduated with an M.A. degree in music education. In 1968, he became the band director and instrumental music teacher at the Wheatley School, located in Old Westbury, Long Island.

After a teaching career that spanned for 30 years, he took early retirement in 1986 at age 60. Mr. Pane had auditioned for a position in the Goldman Band and played in the clarinet section from 1963 to 2005. With the opening of Lincoln Center, the band — under the direction of Richard Franko Goldman — played at Damrosch Park during the summer season and sometimes drew 5,000 listeners a night on Sunday evenings.

Mr. Pane is survived by Julia, his wife of 48 years, his sons Steven and Chris, daughter Terry, and five grandchildren. Although he was a resident of Brooklyn Heights, he will be buried in Peacham, Vermont, near his family house. He will be honored with a military funeral on May 27.