Open up your mind
Let your fantasies unwind
in this darkness which you know you cannot fight
the darkness of the music of the night. – Andrew Lloyd Weber, “The Phantom of the Opera”

Andrew Lloyd Weber’s global phenomenon “The Phantom of the Opera” celebrated an unprecedented 30-year Broadway run on Jan. 24. The event was marked by a special performance in its home in the Majestic Theater followed by appearances by composer Andrew Lloyd Weber, producer Cameron Mackintosh and the very spry 90-year-old director Hal Prince. Members of the “class of 1988” also appeared, led by Sara Brightman, the original “Christine.” The cast, orchestra and crew were then invited to continue the celebration in the Rainbow Room atop Rockefeller Center. At 11 p.m., the Empire State Building capped the festivities by giving all New Yorkers a brilliant light display set to a medley of tunes from the show.

By any standard, 30 years is remarkable. As the longest-running show on Broadway (a record that was broken on Jan. 9, 2006 when it surpassed “Cats”), Broadway’s “Phantom” has grossed over $1.1 billion and has played to 18 million people. The show was entirely sold out for its first eight years, which no other show has yet approached. As of this writing, it will have played 12,500 performances. 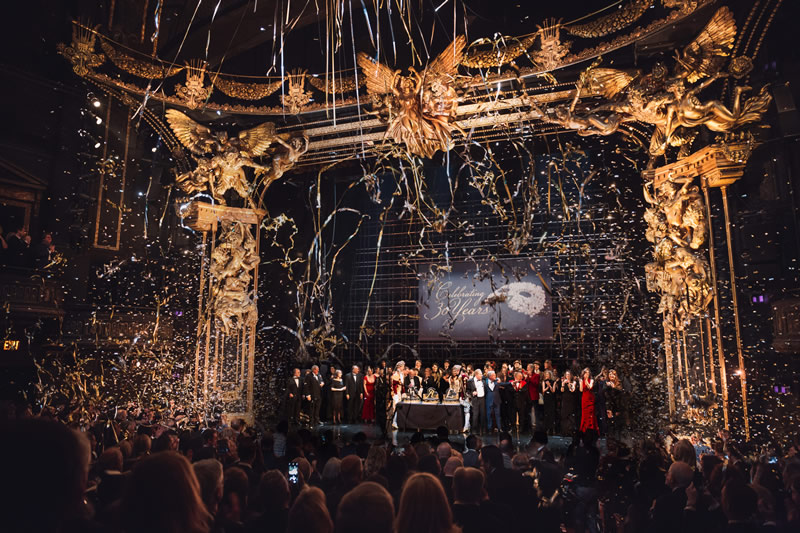 HAPPY BIRTHDAY, PHANTOM! The 30th anniversrary night on Jan. 24 was a scene of celebration and many special guests.
Photo: Emilio Madrid-Kuser

As one of the diminishing number of truly orchestral scores left on Broadway, “Phantom” employs 28 full-time musicians and has employed hundreds more as substitutes and replacements over its long lifespan. Much like a guest appearance on “Law and Order” is for NYC actors, nearly everyone in town for whom there is a book has played the show at one time or another. It is such a fixture that many of us cannot remember a time when it wasn’t there.

What’s it like to spend a whole career playing one show? It’s more challenging than some might think! To keep the show fresh, musicians employ various strategies. Trumpet player and in-house contractor Lowell Hershey studies foreign languages between shows. Clarinetist Matt Goodman takes a serene approach. He swims before the show, and finds guidance from the meditation classic “Zen Mind, Beginner’s Mind.”

Goodman told me that playing the show “requires concentration, whether it’s the first show or the 12,000th.”

Henry Fanelli, the harpist, agrees. “The harp part is demanding enough to keep me from becoming bored,” he told me. “It requires concentration and it is orchestrated nicely.”

Fanelli added, “I’m incredibly grateful to have this kind of security. I flirt with the idea of retiring but I would miss it.”

Similar words of appreciation for having steady work are echoed throughout the orchestra.

“It’s great to have a regular paycheck,” said Atsuko Sato, the show’s bassoonist. “This job has helped me put my kids through college.”

Sato added, “It’s a live show and it’s different every night. You have to give it your full attention. We still have to maintain our equipment, technique, and basic skills every day.”

Of course, there have been memorable moments. There was the night oboist Melanie Feld’s hair caught on fire when a special effect light bulb exploded next to her. One of the hair and makeup people fixed her right up. “At least I got a free haircut,” she quipped.

Then there was the night a pigeon flew into the theater while the audience was exiting. He hung around on the light bar for at least a few shows, making quite a mess before being chased out with a B.B. gun by one of the stagehands. (“Silly pigeon. He could have snuck into ‘Hamilton,’” said trumpeter Hershey.) By the way, the pigeon was not harmed in the process.

So how long can it run? Certainly there are local fans who return on a regular basis. One woman claimed the show gave her the “will to live” and would regularly send enormous trays of sushi to the cast. There was a “Phantom” fan club that would show up unannounced and throw dozens of roses at the stage that would inevitably wind up in the pit. French hornist Peter Reit credits an incredibly effective advertising campaign that has never let up over three decades. “They have always advertised this show,” he told me. “When the movie came out, everyone thought that it would be a negative. It actually ended up being a gigantic positive boost for the show.”

Lowell Hershey added, “The show is famous. Even people who have never been to a Broadway show have heard of ‘Phantom of the Opera.’ I think, that as long as there is tourism like that, there is no reason that this show can’t run.”