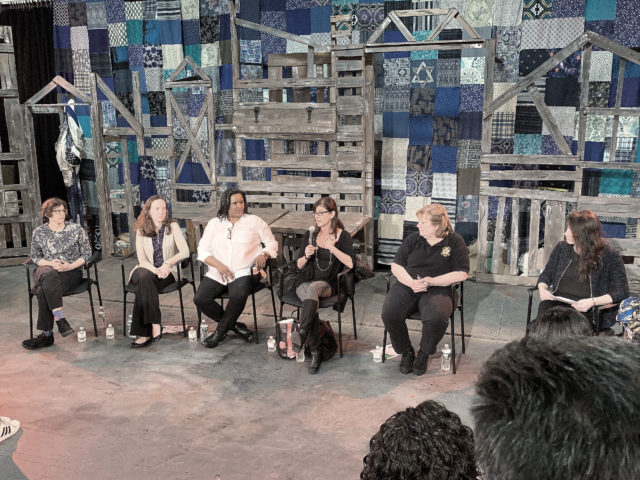 Local 802 Executive Board member Caryl Paisner (middle, with microphone) participated in a recent panel sponsored by the Open Stage Project about women in the theatrical arts.

The Open Stage Project was founded in 2018 by costume designer Elsa Ward under the auspices of the Actors Fund Creative Entrepreneurship program. Its mission is to increase the number of women working in all areas of the theatrical arts. To this end, they offer membership to high school students ages 14 to 18 and regularly sponsor workshops, panels, mentoring opportunities and internships for young women interested in the theatrical arts.

Executive Director Margaret Skoglund is the company manager for the play “What The Constitution Means To Me” and Marketing Director Mary Ragus works in audience engagement at “Harry Potter and the Cursed Child.” The three women who run the OSP make a dynamic trio and are passionate about their mission.

As panelists, we each described our jobs and our career paths and were prompted by the moderator to address the following questions:

I truly enjoyed hearing from the other panelists. A couple of them spoke of taking on backstage jobs at a time when virtually no women were doing them. The young women in the audience were completely engaged and interested.

As this is a generation that has grown up during a decline in organized labor, it felt very valuable to be speaking to them about the benefits and importance of labor unions. They had countless questions about all the jobs available on Broadway and in film and television.

The event was a great opportunity to continue to make connections with members of other unions. It was wonderful to sit side by side with my union sisters and educate the next generation about opportunities for women in what is still a male-dominated industry.

For further information on the Open Stage Project, check out www.openstageproject.org.