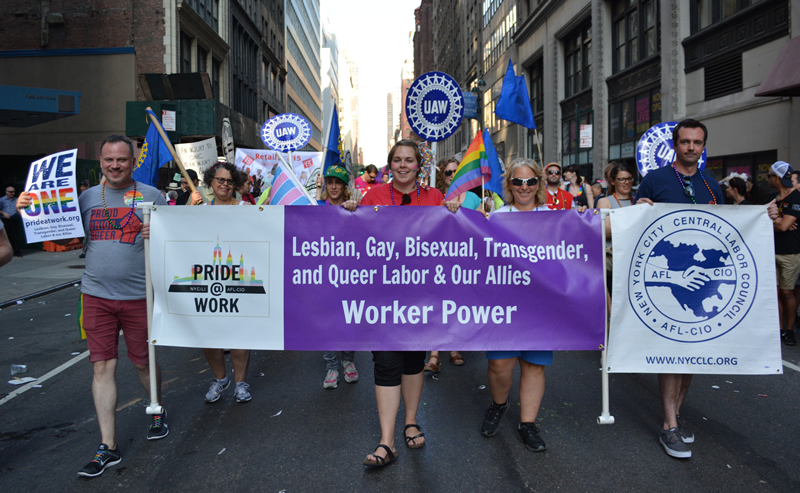 In 28 states you can be fired for being gay, lesbian or bisexual. In 30, you can be fired for being transgender. And in states and jurisdictions that do have laws protecting LGBTQ people from discrimination, you would need the time, energy, and money to file and pursue a complaint with the Employment Equal Opportunity Commission – a process that takes, on average, 10 months. It’s clear: inclusive union contracts provide the strongest protections for lesbian, gay, bisexual, transgender and queer working people. From ensuring inclusive benefits to providing a grievance procedure when discrimination occurs, a union contract should be every working person’s first line of defense. In most states, it is their only defense: despite decades of hard work, there is still no federal law to protect LGBTQ people from discrimination.

Working people in unions have fought hard to make sure that employers cannot discriminate against their employees, including helping pass laws that protect LGBTQ working people. And for more than 20 years, Pride at Work has been pushing the organized labor movement forward on LGBTQ issues.

Founded in 1994 in the wake of President Clinton signing the Defense of Marriage Act and “Don’t Ask, Don’t Tell,” Pride at Work’s victories are many. When that small group of dedicated activists came together to found the first – and only – organization dedicated to advancing the interests of LGBTQ working people, only a handful of unions were outspoken in their support of LGBTQ rights.

Today, the majority of union members belong to a union that strongly supports LGBTQ equality. The AFL-CIO, which is the largest federation of unions in the country, staunchly supports LGBTQ equality. It fought hard for marriage equality, and it still fights every day for further advances, like passage of the Equality Act, which would finally extend LGBTQ nondiscrimination protections nationwide.

But Pride at Work’s role isn’t just advancing the labor movement’s understanding of LGBTQ working people. We have also gone to great lengths to educate the LGBTQ community about the power of working people coming together in a union to negotiate a fair return on their work and dignity and respect in the workplace.

We work regularly with the various national and local LGBTQ groups to inject a working people’s perspective into the movement for LGBTQ equality. One of the important ways we go about this is by holding corporations accountable for their anti-worker and anti-LGBTQ actions. Walmart, T-Mobile, Wells Fargo, and so many other corporations give with one hand and take with the other. Walmart, for example, will donate huge amounts of money to LGBTQ organizations like HRC while simultaneously fighting multiple EEOC complaints of discrimination against transgender employees. Our role is to make sure LGBTQ people – and the organizations that represent us – know that these corporations cannot be considered pro-LGBTQ if they are not also pro-working people.

We’ve also worked with the AFM when the hit show “Transparent” refused to recognize the musicians’ union. We drafted a letter to the production company and worked with our friends at the National Center for Transgender Equality to send a clear message to the show that we expect them to immediately recognize the AFM-organized musicians and to bargain in good faith. I’m proud to report we won that fight, and “Transparent” musicians are now represented by their union.

Our most important work now is fighting back against a president and administration that are attacking us from every angle. From so-called religious freedom policies to attempts to ban transgender people from the military, it’s clear this administration is no friend of LGBTQ people. What’s more, the LGBTQ community is as diverse as our nation as a whole, and every attack on immigrants, people of color and women is an attack on LGBTQ people as well.

We are standing with our LGBTQ community, labor allies and other progressive groups to stand up to these attacks and to push back. Since our founding, our guiding principle has been, “An Injury to One is an Injury to All.” We continue to march, rally, speak out, and stand up to every attack coming our way.

AFM members who want to get involved with Pride at Work and help us fight back have an excellent opportunity in our 2018 convention coming up August 23 to 25 in Phoenix. “Proud and Powerful” is our theme this year and we plan to live every word of it. Union presidents, elected officials and talented activists are all on deck to make this convention one of our best ever.

There’s no better time than now to get involved, get active and make a difference. You can learn more about Pride at Work, our convention and the work we do at PrideAtWork.org. Please check us out and become a member.

Jerame Davis is the executive director of Pride at Work