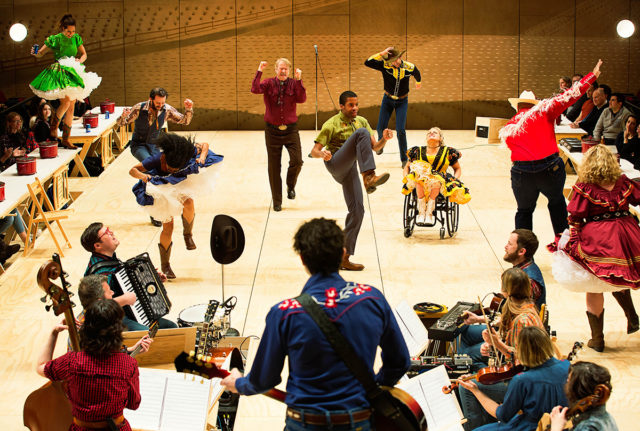 The producers of “Oklahoma!” made a request to Local 802 that a recording be played during a solo dancer’s dream-like scene while the orchestra, normally seated on stage, waits in the wings to make its entrance. (photo by Little Fang Photography)

An ever-increasing and unwelcome trend both on and off Broadway is the use of recorded tracks in productions. In its least troublesome form, this would be a request from producers for so-called “incidental music” – a track or tracks recorded for use during scene changes in dramatic (non-musical) productions. Such incidental tracks may also be used for the purposes of special effects in sound design. Imagine a design element in which music is supposed to be emanating from a radio or television with the attendant limited sound quality, disconnected from the sound that would be produced by a live ensemble. In other examples, a recording has been used to fool the audience into thinking music is coming from somewhere other than the theater pit or an on-stage orchestra. Such was the case in the recent production of “Kiss Me Kate,” in which the scene was set in an alley outside a fictional theater and the music had to sound as if it was leaking through the stage door. Sound designers used a specially mixed recording of the show’s orchestra in playback to make that happen and the usage was approved by our union.

Use of incidental music is permissible under the terms of Local 802 theatrical agreements – under certain defined conditions. Where this becomes an issue is when the recording replaces live musicians in the theater. Incidental music on Broadway may not be used to accompany singing or dancing without the express permission of the Local 802 Executive Board. This prohibition extends to rehearsals as well. Rehearsing a show’s cast to recordings is not allowed. The producer of the new Broadway revival of “West Side Story” recently requested that we grant permission for choreographic rehearsals to be accompanied by a previously released cast album of the show. Although this may have been conceived as a timesaving measure, the fact remains that such usage would put our members out of work during the hours the recording was utilized. The Executive Board reviewed the request and ultimately denied it. As a result, several sets of live rehearsal musicians were kept working.

Over the past decade, our union has dealt with instances of recording usage by producers that we have viewed as harmful to musicians’ interests. We take these requests seriously, in an effort to protect our members’ livelihoods and the collectively bargained agreements we work under. Nevertheless, problems in need of solutions exist and certain circumstances have been recognized where contractual solutions aren’t immediately evident.

Recently, producers of both “Oklahoma!” and “Ain’t Too Proud” have come to Local 802 requesting the Executive Board’s approval, as required, to utilize recordings in specific ways. “Oklahoma!” made a request that a recording be played during a solo dancer’s dream-like scene while the orchestra, normally seated on stage, waits in the wings to make its entrance. While the need for this usage was not definitively demonstrated, the board ultimately granted the request on purely artistic grounds. “Ain’t Too Proud” requested that a commercially released recording by The Temptations be played as the orchestra made its way from the pit to the stage. This was seen by the producers as a practical solution to a logistical matter and it enabled our orchestra to be seen onstage by the public.

The permissible use of recordings requires advance communication with Local 802 and the approval of our board. Those requests should not be left to last-minute notifications, after a show’s creative team has already set its sights on utilizing recordings or worse, when the show is already in performance. Requests to utilize recordings will undergo a rigorous and fair review but without a timely and frank dialogue an approval should not be assumed.

To our orchestra musicians and contractors: if you witness recordings being incorporated into a production, a confidential call to Local 802 is the way to confirm whether the usage has been approved by your union. Our role is to assure compliance with agreements covering your theater. And as always, Local 802 is here to protect you and our membership’s contribution to the theatrical industry. 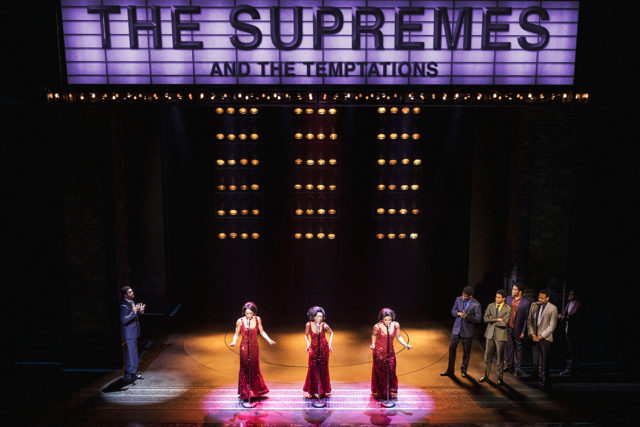 The producers of “Ain’t Too Proud” made a request to Local 802 that a recording by The Temptations be played as the band moves from the pit to the stage. (photo by Matthew Murphy)